During World War II, the Canadian firm John Inglis & Co. manufactured approximately 150,000+ samples of the iconic FN Browning Hi-Power pistol. When the last batch in active service was declared to be surplus by the British military in the early 1990s, many of these fine pistols made their way to American shores. While most now reside in the safes of Hi-Power collectors, these excellent pistols do occasionally come up for sale and still represent a good value for the collector of WWII firearms. The John Inglis Company was a former metal fabrication factory that had gone into receivership in 1936: a victim of both the Great Depression and the death of the two Inglis brothers who had run the company for many years. By 1938, the world was a powder keg, and the only thing missing was a spark. The allies were generally slow to acknowledge this reality, but they were begrudgingly making small some preparations.

One of Inglis’ abandoned factories was located on the western outskirts of Toronto. This factory drew the attention of an American-born businessman who had served in the Canadian military: Major James Hahn. He purchased the factory and the Inglis name, and quickly negotiated a contract to build 5,000 Mk 1 Stens for the British War office, as well as 7,000 for Canada.

With the contract came fresh capital for infrastructure. Inglis retooled the factory and started production of small arms in 1940. John Inglis & Co. became a major arms contractor, and included in its portfolio was the new state-of-the-art Browning Hi-Power. Even though Fabrique Nationale was in the hands of the Germans by 1940, FN’s chief designer, Dieudonné Saive, had managed to escape to England and was able to reproduce manufacturing drawings for the Hi-Power from a combination of his excellent memory and a few sample guns.

By 1943, Chiang Kai-Shek’s Nationalist Chinese Army was seeking to buy 180,000 Hi-Powers via the Mutual Aid Plan with Canada. The Chinese were familiar with the Mauser C96, and wanted their new Hi-Powers to be fitted with similar wooden stock/holsters and 500-meter Tangent sights. Inglis secured the contract, and production began in February of 1944. However, only 4,000 of these pistols were produced and delivered, and even that shipment initially only made it as far as India.

Apparently, most of these 4,000 pistols were eventually flown over the “hump” by American pilots and delivered to Chinese forces. Another 14,500 +/- Chinese contract pistols had been produced when the original contract was cancelled in September of 1944. All of these undelivered Chinese- contract pistols were accepted by the Canadian and British militaries, and were given a designation of “Pistol No 1 Mk 1” and “Pistol No 1 Mk 1*.”

The sample gun photographed for this article is from this batch of Chinese Contract pistols that was accepted into the Canadian military.

Once it was clear that World War II was ending, the Allies granted a new contract to China, and delivered roughly 40,000 +/-  Hi Powers to Chiang Kai-Shek’s Army. This contract was cancelled in the fall of 1945, once it became apparent that Mao’s Communist Forces were going to defeat the Nationalist Chinese Army.

All in all, Inglis produced a total of only 66,350 Chinese contract Hi Powers over an 18-month production span from February 1944 to October 1945. The most obvious way to identify these historically significant pistols is by the “CH” letters in the serial number.

Feature-wise, the Inglis Hi-Powers are remarkably similar to early FN-produced versions, but parts are often not interchangeable. They feature internal extractors and the half-moon scallop cut on the receiver. However, there are some variations amongst Inglis-produced models, most of which are beyond the scope of this article. For those seeking additional guidance on this topic, I highly recommend seeking out a copy of Clive M. Law’s excellent (but out of print) reference book “Inglis Diamond: The Canadian High Power.” The Chinese contract pistols feature the 500-meter tangent rear sight, as mentioned above. While probably not the most useful feature, these sights are unique and add to the collector interest of this firearm. The front sight is set in a dovetail, and is heavily staked to prevent movement. 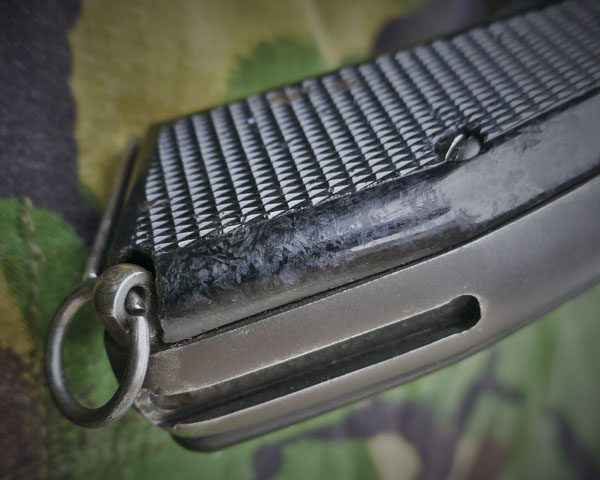 The Chinese contract pistols feature a lanyard ring, and the back of the grip on the frame has been slotted vertically to accept the wooden “Holster C, No. 1 Mk1.” Also visible in the photo above is the unique look and texture of the hand grips.

Disassembly is traditional of the FN Hi-Power design: I have provided a disassembled view for reference. These photos show the salient features of Chinese contract Inglis pistols made after Mid-June, 1944.  Again, the first four thousand pistols were roll-marked in Mandarin script, and those uber-rare pistols are worth more than conventionally-marked Inglis Hi-Powers. Nonetheless, the more common “CH” variant is shown below. Starting with the right side of the pistol, we see three matching serial numbers: one on the barrel, one on the slide, and one on the frame. The sample pistol features the “CH” prefix, indicating that it was originally intended for shipment to China.   The serial number was applied at the Inglis factory after the pistol’s finish was applied, so that the numbers appear “in the white.” In this case, the fact that the finish covers the indentations left by the serial number indicates that this pistol has undergone at least one factory overhaul. The frame features the “Dominion of Canada Proof (DCP) Crossed Flags” marking. This is indication that the pistol was tested at the Inglis factory with over-pressured proof cartridges.

In this case, the barrel features the Canadian etched “crossed flags” proof mark, which is a shorthand version of the DCP proof mark. Note that a matching serial number sample is not an assurance of original parts: serial numbers were often added to replacement barrels as part of factory refurbishment programs.

Finally, one can see a partial “C-Broad Arrow” on the frame, just to the upper left of the DCP proof. This is an indication of the pistol’s provenance; it was property of the Canadian government. This mark was applied by Inglis at the time of manufacture, and is found even on the samples delivered to China. A larger Canadian “C – Broad Arrow” can be found on this sample, just behind the slide serrations. This mark was applied by local level by Canadian military armorers, on orders of the Canadian Military Headquarters in London. In this case, the mark is located on the left side of the frame, just above the safety, but it can also be found on the right side of the slide. This sample pistol also features the later Mk II safety. Most Inglis pistols do not have a serialized magazine. However, in 1950, Canada supplied 1,578 pistols to Belgium. These pistols were part of the first batch of Chinese contract produced in 1944, which had some reliability issues that were fixed in the later production. The reliability issues apparently had to do with the reverse-engineering and metric-to-English measurement changeover.

Since part of the problem was magazine feed, the Belgium armorers would find two magazines that worked with THAT pistol and numbered them. The pistols were gradually withdrawn from service and put into storage, and were replaced with new-production FN products. Most, if not all, of the Belgium Chinese contract pistols have been imported into the U.S., and collectors will pay a considerable premium for these rare variants.

The presence of the secondary C-broad arrow behind the serrations combined with the numbered magazine strongly suggests that this sample was one of the No. 1 (i.e. “Chinese model”) pistols which actually saw Canadian military service before being sent to Belgium in 1950.

No.1 MK I* production dates by serial number

Serial numbers on pistols for the Chinese contract used the letters ‘CH’, followed by a 4-digit number.

The serial number of this sample, “ICH3849” indicates manufacture in August of 1944. Note again that the first 4,000 Inglis Mk.1 No.1s are marked with Chinese characters. These rare pistols are worth more than double the price of pistols without the Chinese markings. The original Chinese contract stocks were produced by Small Arms Limited (“S.A Ltd.”) of Long Branch, Canada. They are made out of walnut, and have been finished in a medium brown stain. Most of the original stocks are marked with the year of manufacture (1944 or 1945) under the “S.A. LTD” stamp: The wood-to-medal finish on the original wooden holsters is quite good: The photo above shows a close up view of the metal hinge, screws, and the “Made in Canada” mark. My understanding is that this mark is only found on samples that were imported into the United States. The two photos above show the inside of the holster. Originals will feature wooden inserts that are a lighter color than the rest of the stock: The top of the stock features a “Broad Arrow” with the number 17 set inside an oval: Caution: There are many “reproduction” wooden holsters in circulation. These fake stocks will often have counterfeit markings intended to mimic the originals. In many cases, the fit and wood-to-medal finish is of poor quality, but some fakes are quite convincing. For example, Sarco sold repo stocks that featured the “S A LTD 1945” and “made in Canada” marks pressed into the wood, and reportedly, the fit and finish on these stocks was quite good.

The real S.A. Ltd. stocks were all made of walnut, whereas fakes are almost always made of some other species of hardwood. Again, the “real deal” stocks have lighter colored wooden inserts located on the inside of the holster. Another telling sign is the smell: real stocks have that old warehouse smell that is hard to describe but easy to recognize.

The correct magazine for the John Inglis pistols is marked “JI” on the front, as shown in the photo below: The floorplate of the Inglis magazine has what is known a “split base,” which is also marked JI, as shown above. The magazine’s follower is made out of aluminum: As mentioned above, most Inglis magazines are not marked. However, certain pistols that were re-arsenaled in Belgium will have the pistol’s serial number heavily stamped into the magazine and base plate, as discussed above. The author’s sample has these marks, as shown above.

The provenance of the Chinese contract Inglis Hi-Powers makes them an interesting addition to any collection of WWII firearms. Given the relative scarcity of these fine pistols, they are still surprisingly affordable. Samples with the original stock can typically be found in the $1,500 to $2,000 range, but the prices will undoubtedly go up in the future. Additional interest is given to the fact that an original pistol/ stock combination is exempt from regulation under the NFA. Note, however, that this limited exemption does not apply if the stock is a reproduction.