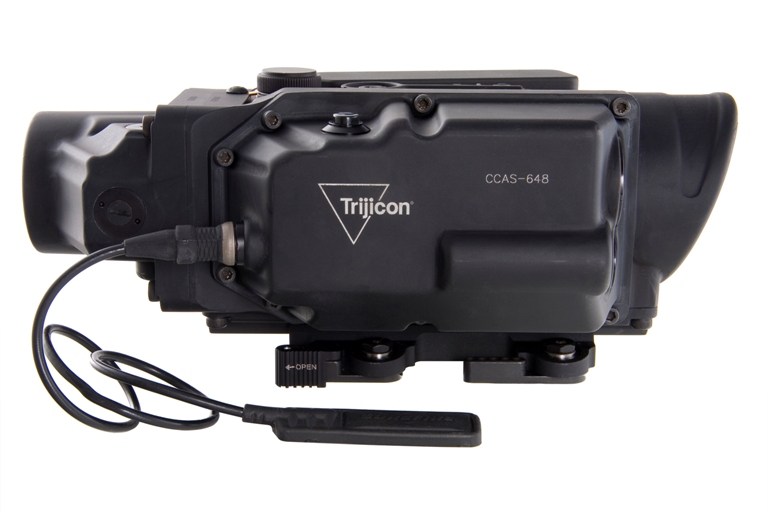 I’m calling it now: this is the year of the auto ballistic compensating scope. Some, however, are smaller and more awesome than others. Trijicon’s entry into the growing line of scopes, for example, appears to be approximately the size of a minivan. Presser after the jump, and stay tuned for our hands-on review of the scope later today at the range.

Trijicon’s new CCAS (Continuously Computed Aiming Solution) is designed to support a multitude of weapons systems ranging from vehicle mounted machine guns, infantry weapons to sniper rifles. The CCAS greatly expands a warfighter’s ability to quickly identify and engage targets by eliminating the cumbersome and time-consuming process of ranging, gathering and entering environmental data and generating a firing solution with a PDA. The CCAS has ranging capability out to 2,000 meters and gathers environmental and weather data including temperature and atmospheric pressure. In just half a second after activation, the onboard computer generates a firing solution using the most advanced ballistic programs available and displays an aiming point on the green reticle. This includes computing leads for moving targets. If the warfighter can see the target through the high-quality, 6X optic, he can hit it.

Operators simply have to select their weapon and ammunition type from an extensive list of common weapon/ammunition combinations in U.S. military and NATO inventories, zero the system and CCAS does the rest. Set up, zeroing and operation are simple and intuitive. Power is supplied to the unit by four, commonly available CR123 batteries.

First-round hits on targets allow soldiers, sailors and marines to dominate the battle space and save lives. In the frantic, fast-paced world of the battlefield, coming up with a firing solution for distant, fleeting targets was the near exclusive domain of specially trained sniper teams or squad designated marksmen equipped with special weapons, laser rangefinders, ballistic computers and weather centers. The Trijicon CCAS integrates all these tools into one optic and puts long-range, first-round hits on moving targets within reach of the average infantryman armed with standard individual or crew served weapon systems.

The CCAS is a force multiplier, making the warfighter faster and more lethal.