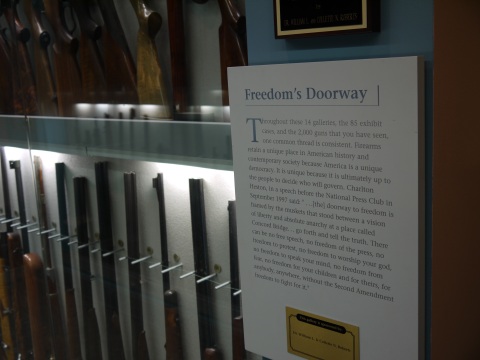 In 1977, Charlton Heston said “The doorway to freedom is framed by the muskets that stood between a vision of liberty and anarchy at a place called Concord bridge . . . There can be no free speech, no freedom of the press, no freedom to protest, no freedom to worship your god, no freedom to speak your mind, no freedom from fear, no freedom for your children and for theirs, for anybody, anywhere without the Second Amendment freedom to fight for it.” The doorway to the National Firearms Museum—well, the exit—is framed with muskets. And rifles. And shotguns. But let’s start at the beginning and work our way to the iconic 1911 . . .

The National Firearms Museum fills an entire floor of the NRA Headquarters in Fairfax Virginia. Walking through the museum with Senior Curator Doug Wicklund, I got fresh insight into the breadth, beauty and philosophy of their carefully assembled and displayed collection. 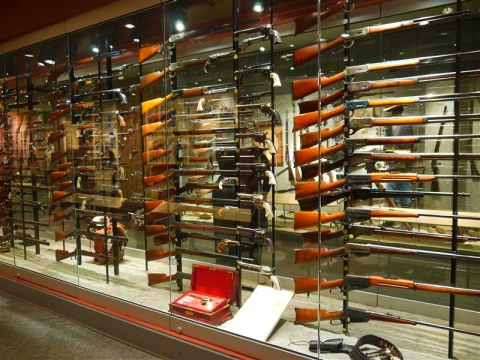 Obviously, the NRA museum is not lacking in firearms. It’s crammed with over 3,000 guns encompassing the entire firearms history of the United States. In several displays, curators use their comprehensive collection to illustrate a weapon’s evolution. In the case above, you can chart the minor and major changes that helped keep the Winchester repeating rifle a popular choice for decades, through various calibers, actions, production techniques and applications. Every one’s a Winchester. Every one’s different. 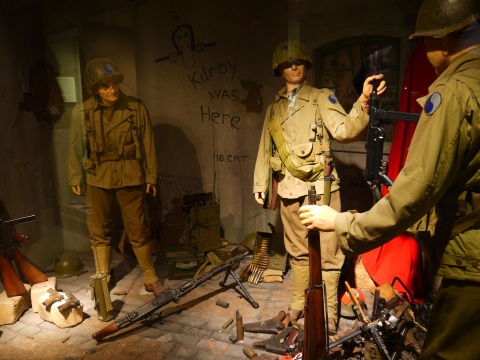 The NRA museum includes static displays of military firearms grouped by the conflicts in which they participated. In this scene, Americans GIs discover a cache of Nazi weapons. Surprisingly, the [non-multi-ethnic] tableau wasn’t designed to cram as many WWII weapons into one scene as possible. “The Brits fought for their lives, the French fought for medals,” Wickland asserts. “The Americans fought for trophies.” Every gun in the display was just that: a war trophy brought back to The Land of the Free by an American GI. The Nazi flag on the wall as well.

At this point in the tour I remembered something about an exception to the machine gun registry rules for museums, allowing “found” machine guns to be donated and not destroyed. Mr. Wicklund shook his head wistfully. “We’re a private museum, the rules don’t include us.” He recalled an instance where someone dropped a “live” machine gun at the door to the building in the middle of the night. “I couldn’t keep it” he said “I brought it to one of the other museums and told them they had something very special here, to take good care of it.” 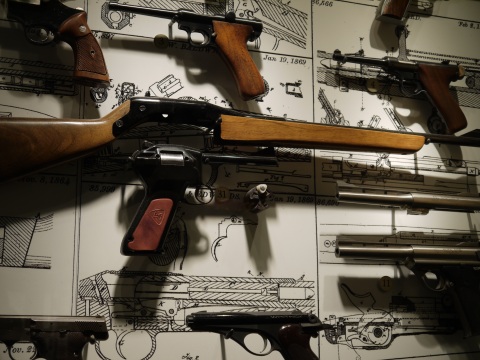 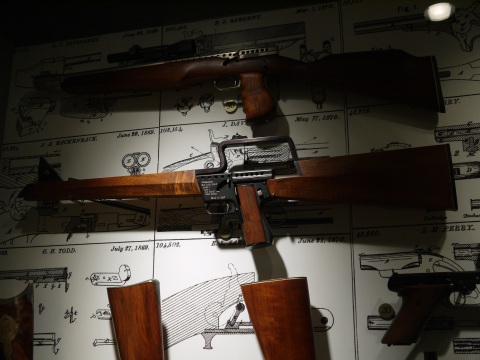 The museum has a case dedicated to “interesting” designs. Among these pieces: the Dardick pistol, which used triangular cartridges and did not have a chamber. And a Gyrojet rifle, made popular by the James Bond movie You Only Live Twice, which fires a rocket-propelled gyroscopically stabilized projectile. 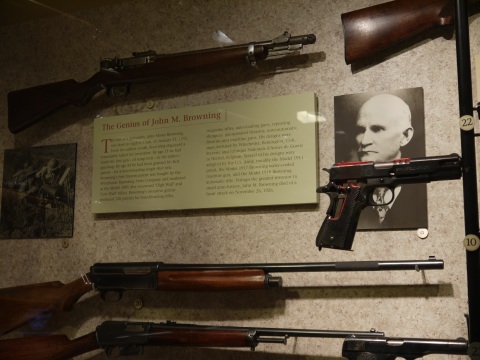 The most influential inventors get their own case. A shrine to the greats of firearm design—Browning, Garand and Ruger—occupies one corner. Conspicuously absent from the roll call of gun designer immortality: Stoner and Kalashnikov. Looking over my notes, I only found six ArmaLite rifles on display. 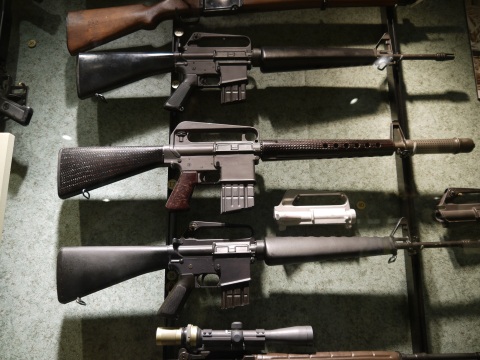 While there may not be as many of Stoner’s children on display as Browning or Garand, the museum offers visitors a look at some rare examples. These early models are tucked in with the Vietnam-era display. 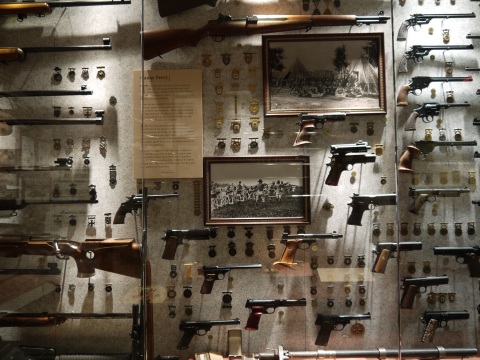 There’s also a section of the museum devoted to competition shooting throughout the years. This is one wall of a cul de sac devoted to the National Matches. Hundreds of medals line the walls accompanying examples of the most popular competition rifles of their time. 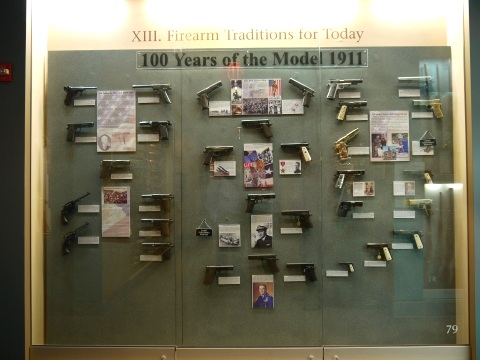 And then there’s the 1911 display, commemorating 100 years of John Moses Browning’s most famous firearm. Compared to the other displays, the 1911 exhibit is a little underwhelming. There aren’t that many models on display, and there’s no super special case. It’s just some guns on a wall. Until you look closer . . . 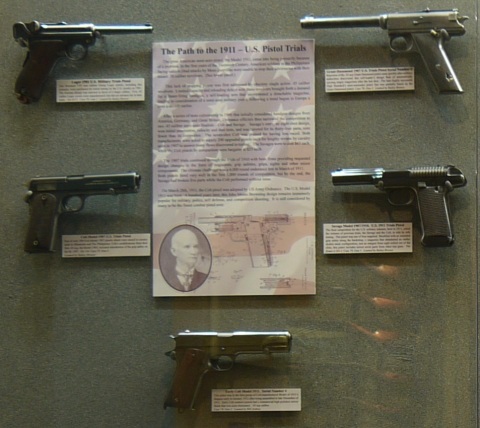 Within the display: the entire history of the m1911, starting with the military trials that spawned Browning’s creation. The actual original pistols entered for the trials are here, including serial numbers 1 and 2 of Savage’s 1907 pistol chambered in .45 ACP, a Colt 1907 (early precursor to the 1911) whcih was in the trials, and finally serial number 4 of Browning’s final 1911 design. 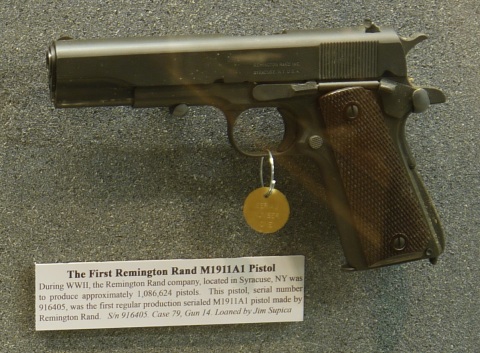 The display celebrates the original design and the modifications made afterwards. The above pistol was the first m1911A1 to roll off the Remington production line in 1924. Remington was to make 900,000 identical pistols in the years to come, pistols which served in conflicts such as World War II and beyond. 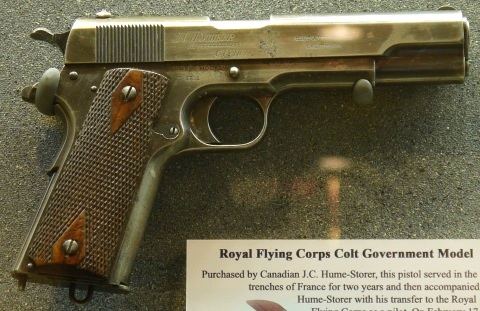 There are also a number of 1911s with an interesting history. This pistol, for example, was purchased by a Canadian named J. C. Hume-Storer before he shipped out with the Canadian forces to the trenches of World War One. It was constantly on his side through two years in the trenches, and followed him when he subesquently transferred to the Royal Flying Corps. He took off from France one day during the war, sidearm in his holster, and was never seen again. Almost a century later, Doug Wicklund spotted the pistol at a gun show, purchased it, and traced it back to that airman, thanks in part to the elaborately engraved name on the slide. 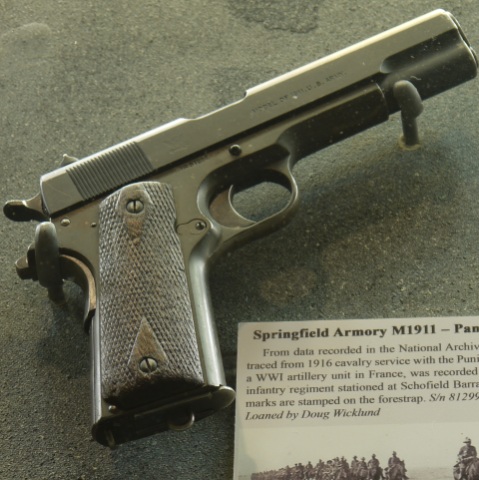 This 1911 was issued in time to accompany the military expeditions to stop Pancho Villa before World War I. During WWI it was issued to an artillery unit in France, where it was susequently “lost.” It turned up with an infantry regiment at the Schofield Barracks in 1940, just in time to be re-issued for WWII. This was another of Doug Wicklund’s personal pistols. In fact, many of the pistols on display are on loan from private collections. 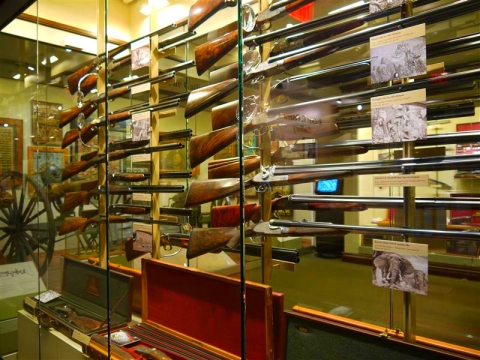 Needless to say, a firearms nerd can spend an entire day getting lost in the NRA National Firearms Museum in Fairfax, Virginia. If you plan on giving the exhibit the once-over (i.e. if you have to drag some non-enthusiast members of your family along), plan for an afternoon’s edutainment. Admission is free. They’re open 9:30 am to 5 pm seven days a week.