As we saw last week, MagnetoSpeed is branching out from chronographs into other firearms-related gear. Next up for them is a product designed to solve the frustrating difficulty of target impact verification at long ranges. Employing bright LEDs redirected by a flexible fiber optic slab, the T1000 Target Mounted Hit Indicator provides clear hit (and near-miss) confirmation at any range.

On the first outing with the T1000, Chris and I hit the range — a range in both the shooting and the cows sense, actually — and slapped the Hit Indicator on a steel gong at 430 yards. Elapsed time from opening the box to ready-to-use, installed unit: about 30 seconds. Inside the box was the assembled unit, an extra rubber reflector, two strips of self-adhesive, loop-side Velcro, and a red plastic alignment tool to helps aim the T1000’s 18° beam towards the shooter. 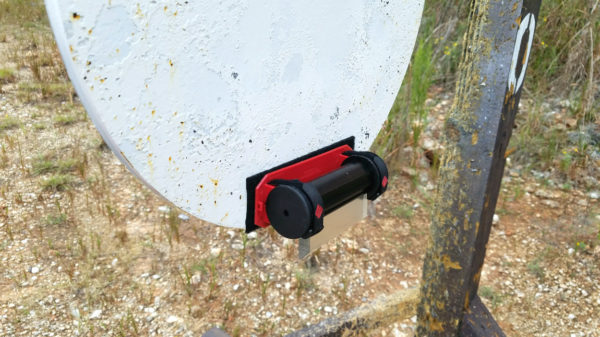 Stick the Velcro to the back of the target, stick the T1000 to the Velcro, and you’re good to go. Depending on target angle and shape plus the location of the shooter, the Hit Indicator may be better-suited to a location on top, bottom, or sides. It functions fine in any orientation. There are only two real considerations: the shooter must have line-of-sight to the reflector, angled so the shooter is within its 18° beam for best visibility, and the T1000 itself should be shielded by the target from bullet impacts. The round body of the Hit Indicator is strapped into its mount by two Velcro straps, allowing for quick and easy reflector angle adjustment. Fear not, bullets pass right through the flexible rubber reflector while doing very little damage. Sort of like those self-healing targets, a smaller-than-bullet-diameter path is made and the rubber closes up on it afterwards.

The Hit Indicator above was installed at a PRS match and, after 600 rounds on target, suffered only two hits to the reflector. As the reflector should be able to handle a couple dozen hits before needing replacement, they should last a long time. Replacement cost is just a few bucks, and they can be swapped in the field without tools in a few seconds. To disassemble the T1000, simply slide off the rubber end caps and push the electronics core out of the aluminum housing. Two AA batteries power the T1000 for a year on standby or about 2,500 hit indications. It’s also waterproof, so it can be left on outdoor targets as desired. An accelerometer and a microphone confirm hits on target, resulting in bright red flashing light. A near miss, confirmed by the unit primarily via its microphone catching the supersonic crack of the bullet whizzing by or that plus nearby bullet impact sound (e.g. on the target stand, a rock, etc.) without resulting target motion, results in bright yellow light. Miss indication can be turned off if desired, but it’s helpful in scenarios where missed bullet impacts aren’t visible due to the terrain (or lack thereof) around the target. On the range, the T1000 performed as advertised. With the naked eye, if you can see the target you’ll probably see the Hit Indicator blinking brightly. With a magnified optic — whether a rifle scope or spotting scope — it’s extremely bright and obvious. You’d have to willfully look away to miss the flashing. While the indicator never failed to confirm hits from .223 or 6.5 Creedmoor, it did miss a near miss. As the round impacted dirt off to the side of the target, I don’t think the microphone was able to pick up enough supersonic crack and/or a loud enough bullet impact to alert to it. Rounds that whizzed past the target resulted in yellow flashing. We didn’t hit the chain or stand, but on my next range trip I’ll do that on purpose with some frangible 9mm to see what the T1000 has to say. Overall, I love this thing! They’ll definitely be popping up at PRS matches and shooting ranges soon (Best of the West outside of Austin has had T1000s on its 1,000 yard targets for a couple months now). In fact, I can envision these becoming mandatory in the Precision Rifle Series and other forms of long-range competition involving steel targets, as it’s all too easy to miss an impact through a spotting scope. And a missed hit could be the mistaken difference between a first- and second-place finish.

Even as a hobbyist, the T1000 is relatively affordable and would come in handy for day trips to public shooting land or visits to shooting ranges that don’t have hit indicators but would allow you to stick your own on. It’s reliable and simple to use, and it works great.

Power: Two AA batteries, good for about 2,500 hits
Settings: Adjust sensitivity, flash behavior and duration, cycle miss indication on/off
Installation: Velcros to the back of any steel target large enough to shield it from hits (additional stick-on Velcro is available at any hardware store)
MSRP: $150

Utility * * * * *
Visual confirmation of bullet impacts on steel targets at long ranges can be hit-or-miss, depending on all sorts of variables from weather conditions to caliber choice, range, optics, eyesight, and more. Likewise, auditory confirmation is unreliable to impossible depending on range, caliber, weather conditions, ear protection, gunfire from other shooters, target design, terrain, hearing acuity, and more. Plus, it’s slow (3 seconds on up for the sound to return if you’re past a thousand yards). The T1000 provides instant, glaringly obvious, reliable confirmation of hits on target, which is hugely useful.

Function * * * * *
Hit detection is reliable and accurate, and can be tuned for sensitivity by the owner, if needed. Near-miss detection is optional and won’t be 100% reliable, but doesn’t have to be. It’ll indicate ~2,500 hits before the two AA batteries need replacement. Inexpensive rubber reflectors are easy to replace as needed. And it’s waterproof, so Hit Indicators can stay on outdoor targets if desired.