Tired of that wasted empty space inside your hollow AR-15/AR-10 grip? While some brands have a cap on the bottom, allowing users to stuff whatever they want (size permitting) inside, MagnetoSpeed has gone a different direction and created a system of useful accessories that lock into their grip. Made from glass-reinforced Nylon, the grip itself is rigid and strong. Aggressively-textured friction pads adorn the sides. On the rear, the contour is pleasantly ergonomic, fitting my palm properly and comfortably. Ribs enhance the grip’s overall slightly pebbled, matte texture except for the polished section where the web of one’s hand fits. While I can’t say I’m a fan of the shiny spot on an otherwise matte unit, it is really comfortable. On the front of the grip are some vertical serrations and a single finger groove, which provides some vertical support without being as intrusive as a series of finger grooves that won’t fit everyone’s hands. Still, I’d happily go groove-free in exchange for texturing more like the side panels or varying serrations that provide both horizontal and vertical grip.

Overall, the M-Series Grip is good, but not great on ergonomics. It’s certainly solid and feels of good quality. The grip’s real trick, of course, is its ability to hold one of MagnetoSpeed’s four current accessory module options: DryBOX, MiniLIGHT, MiniMAG, and, coming soon, MonoPOD. We’ll review the MonoPOD separately when it hits the market. As the name implies, it’s an easily height-adjustable monopod that springs out of the grip for use as a rear rifle rest. All of the accessories lock into the grip, clicking solidly against spring tension provided by a plunger at the top. Depress the button at the front of the grip and your accessory ejects clear out of the grip and into your hand. Except for the MonoPOD, but we’ll get into those details in that review later. As seen a few photos up, the MiniLIGHT has a bright white LED. It’s brightness-adjustable and also has a strobe mode. Exact lumen rating unknown, but it’s bright enough to be irritating if not painful in the dark.

As seen in the photo above, there’s also a red LED “map light” mode, which is handy for a little assistance in the dark without ruining your night vision. Obviously when you eject the MiniLIGHT out of the grip it can be used as a hand-held flashlight, but it’s also ready to be weapon- or hat-mounted. Included with it is a Picatinny rail mount and a hat brim clip, both of which work with the light’s integrated rare-earth magnet to make for instant mounting. It clicks on solidly, with slots and a locking tab to prevent it from sliding around or self-dismounting under recoil. MagetoSpeed’s MiniMAG module is the attention-getter of the bunch. It’s a fully-functional, three-round AR-15 magazine. Just shove it up inside the magazine well — far simpler than I expected — and it locks in place exactly like it should. Whether full or empty, it drops free and behaves like any standard AR-15 magazine. From the top, you’d never know. 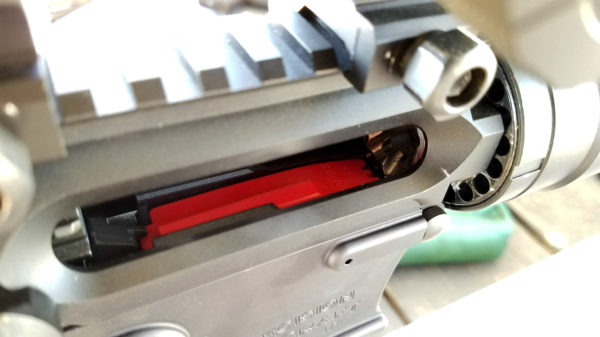 It even locks back on empty. I loaded and fired all three rounds from the MiniMAG twenty times with zero issues, with three types of ammo. It works just fine.

As for the utility of the MiniMAG? I can see it. While many of us will focus on tactical applications, it’s nice to have a backup for varmint hunting or any other instance where you’ve wandered away from your ammo supply, expended what you brought, then came across another target.

I’ve actually gone to the range a few times now with a rifle and plenty of ammunition but no magazine. Once I single-loaded an AR through 50 rounds of accuracy testing. Though an AR mag now permanently lives in my car for the inevitable next brain fart day, having a spare that I can’t forget is pretty cool.

It sounds like MagnetoSpeed is looking to license out this system somehow so other manufacturers can get in on the M-Series game, whether that means making other grips that are compatible with the insert modules or making other modules, or both. Or, making things like stocks and vertical grips and holsters and who-knows-what-else that also accept the accessory modules.

In fact, my biggest problem with the system today is that my AR-15 only has one grip. I’ve had a hard time choosing between the MiniMAG and the MiniLIGHT as the module of choice to live inside of it. Heck, I’d happily run the mag in the grip and the flashlight and dry box inside a buttstock. Or, if it proves handy, the MonoPOD in the grip and the other accessories clicked into a stock and/or a vertical grip, etc.

It’s a great idea, and I’m definitely hoping to see other manufacturers coming out with M-Series-compatible grips and accessories, if and when MagnetoSpeed opens that up.

Utility * * * * *
Nobody likes a waste of space. Filling that space with useful items that don’t rattle around loosely and eject into your hand under spring tension? That’s a win.

Quality * * * *
For a first release of a new product line — a first departure from MagnetoSpeed’s namesake chronographs — quality is awesome. Really, compared to mature products the quality is very good. Fit, finish, materials quality, etc., is all great.

Ergonomics * * *
I can envision future improvements to the grip itself, primarily around its ergos and its texture and feel. It’s a big improvement over your “Mil-spec” A2 unit thanks primarily to its nicely-curved backstrap and a slight palm swell, but there’s plenty of room for enhancements.

Overall * * * *
MagnetoSpeed’s M-Series Grip System is pretty cool and useful. I’m interested to test the MonoPOD to see, primarily, if the grip is a useful point for a rear support, but even without the MonoPOD in the picture it’s a neat system. And at current prices, you’re in it just $34.25 for grip, DryBOX, and MiniMAG, which ain’t bad at all.