The Brits aren’t screwing around any more. In the seemingly never-ending fight against Islamist terrorism, they’ve decided to deploy the deadliest weapons they can possibly find. And that means…trocars!

You may remember the almost thermonuclear level of hype that surrounded the release of G2 Research’s RIP ammunition a few years back. The ammo features “trocars,” shards that separate from the bullet after impact and go their separate ways, causing a target’s insides to frappe faster than strawberries and bananas in a NutriBullet. Or so the company said. The (SAS) is getting a horde of new weapons already used by the US special forces.

One piece of ammunition in the formidable arsenal is the Rapidly Invasive Projectile, or RIP, which is designed to cause maximum internal damage.

The bullets are designed to kill on impact, and will be issued to the crack squad in the coming weeks.

Wait, wasn’t their previous choice of gun food already “designed to cause maximum damage” and “kill on impact?” Have they been using rubber bullets until now? Anyway…

Alongside the RIP, British forces will also be issued with “hollow point”, which have a similar design but instead of splintering the tip of the bullet flattens out to cause a massive wound. …

The RIP, as the name suggests, is described as the most lethal ever made.

Made by US company G2 Research (G2R), it is designed to splinter into eight pieces.

Each piece is as deadly as a single bullet.

So if RIP ammo is the deadliest ammunition ever made, which poor SAS sods will draw the short straws and be issued those old fashioned hollow points? If you were going up against villainous ISIS scum, wouldn’t you want the benefit of “exploding” bullets that are sure to send your enemy straight to Paradise?

The new kit will be used in their new HK MP7a1 sub-machines – the same weapon used to kill Osama bin Laden.

Gives you chills just thinking about what that will do to your average terrorist’s internals, doesn’t it? There’s only one problem. According to the extensive three-part testing our own ShootingTheBull410 performed on RIP ammo back in the day, it doesn’t live up to its soul-destroying, organ-liquefying reputation (see his analysis here, here and here).

In fact, based on STB410’s exhaustive analysis, while there are some instances in which RIP can be effective, it didn’t perform as well as conventional, reliable Gold Dot or HST ammo in all-around duty situations. 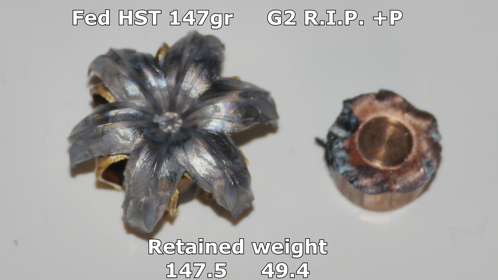 Which kind of makes you wonder what impressed the British brass so much that they’ve decided it’s just the thing to hand out to their special forces in the field. In any case, if you’re an ISIS soldier or wanna-be, be afraid. Be very afraid.