Even as Dan and I were recording our first podcast, recounting the mystery that has become the Mandalay Bay hotel shooting, the Las Vegas Sheriff’s department revised the crime’s timeline. Again. chicagotribune.com:

Las Vegas police said Friday that the gunman who opened fire on a country-music festival far below his hotel suite did not shoot a security guard six minutes before that rampage, contradicting a timeline that they had offered earlier this week.

For those of you keeping score, the Clarke County Sheriff’s department has now provided no less than three different accounts of this crime.

In the immediate aftermath of the shooting, Sheriff Lombardo told the public that Mandalay Bay security guard Jesus Campos (above) interrupted spree killer Stephen Paddock’s attack, drawing his fire and inspiring the killer to kill himself, ending the slaughter.

Sheriff Lombardo hailed Mr. Campos as a hero. And then, earlier this week, Lombardo revised the timeline. He said that Mr. Paddock had shot Mr. Campos six minutes before opening fire on a crowd of 22,000 country music fans below his 32nd floor hotel room.

When that bombshell hit, including the revelation that the Mandalay Bay hotel didn’t call 911 during those six minutes, MGM went public with a third timeline.

The owners of the Mandalay Bay claimed that just forty seconds elapsed between Mr. Campos’ injury and Mr. Paddock’s assault on the crowd below.

Sheriff Lombardo is now telling the world that MGM got it right, and his investigators got it wrong. Twice.

On Friday, Lombardo said that he stood by providing the 9:59 p.m. time, which he said “wasn’t inaccurate when I provided it,” but said that he was told that the time had been written by someone in a security log.

Upon investigation, he said, police learned that Campos first encountered a barricaded door on the 32nd floor at 9:59 p.m., and that he was fired upon by Paddock “in close proximity to” 10:05 p.m., when police say the mass shooting began.

Conspiracy theorists note: it’s entirely possible that Sheriff Lombardo and his officers are stupid and lazy and poorly trained and media hungry enough to rely on the hotel’s written log to establish a timeline. And a cell phone call log is solid evidence.

That said, is it a coincidence that this new timeline — which eliminates the six-minute gap during which the Mandalay Bay hotel failed to contact the police — could save MGM billions of dollars in legal liability? 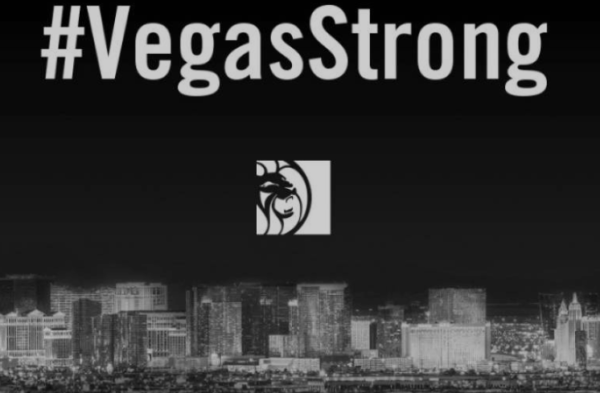 “There is no conspiracy between the FBI, between LVMPD and the MGM,” Lombardo said at [Friday’s] news briefing, during which he partially read from prepared statements and took no questions.

“Nobody is attempting to hide anything in reference to this investigation. The dynamics and the size of this investigation requires us to go through voluminous amounts of information in order to draw an accurate picture.”

Speaking of pictures, an “expert” speaking to the latimes.com reports “that one place the casino’s cameras don’t have eyes is the network of hallways inside the Mandalay Bay hotel.” Wait. What?

Hallways can be difficult for security cameras to capture — they might be too long or too dark to show what’s actually happening — so hotels instead put cameras on bottlenecks like elevator banks. Does that look like a “dark hallway” to you? Is there such a thing as a dimly lit area that a modern security camera can’t adequately record? The Times says their pet expert “declined to be identified because of concerns of future litigation.”

If you suspect that Las Vegas law enforcement is helping the hotel avoid future financial catastrophe by covering up the hotel’s reaction (or lack thereof) to the shooting, add these two facts:

– Sheriff Lombardo won’t say whether or not the Mandalay Bay hotel called 911 to report Mr. Campos’ shooting, and if so, when.

And yes, there are other important unknowns [via the chicagotribune.com] . . .

However, MGM’s statement raised further questions, including what time the company thought Campos was shot, whether it thought the mass shooting still began at 10:05 p.m. and why, if police and security “immediately” headed to the 32nd floor, officers did not arrive there until 10:17 p.m.

A spokeswoman for the company did not respond to a request for comment on these questions.

The Sheriff’s Department said those on-site police officers —  whose reason for being in the hotel remains undisclosed — responded the wrong floor (31st), delaying their arrival on the 32nd floor. As of this writing, there’s has been no official revision of that “fact.”

This is also the first mention of armed Mandalay Bay security responding to the shooting. Who, how many, where did they go and what did they do when they got there?

Meanwhile, one thing’s for sure: we don’t know the truth about the sequence of events that led to the death of 59 people and the injury of 545, 45 of whom are still in hospital, some in critical condition.