“Moms Demand Action for Gun Sense in America, a gun control group backed by former New York City Mayor Michael Bloomberg’s considerable financial resources, will blanket half a dozen newspapers with ads meant to pressure the grocery giant to stop allowing customers to openly carry firearms in its stores,” MDA’s house publication huffgintonpost.com proclaims. “The ads will be displayed on the newspapers’ websites as well as on a billboard in Cincinnati, where Kroger’s corporate headquarters is based . . . Erika Soto Lamb, a spokeswoman for Everytown for Gun Safety, the umbrella group that includes Moms Demand Action, declined to say how much the ads cost, saying only that the amount was in the ‘six figures.'” Well that figures. What I’d like to know is . . .

Which supermarket chain allowed Every Mom for Gun Control in America to shoot these pics therein? And what bright spark didn’t figure that the Old Fat White Guy (OFWG) would be appear MORE repulsive than the relatively svelte female firearms schlepper? Although I’ve got to give MDA’s media manipulators credit for having said AR-viste carry the gun at low ready; a threateningly unthreatening way to hold a rifle in the produce department. 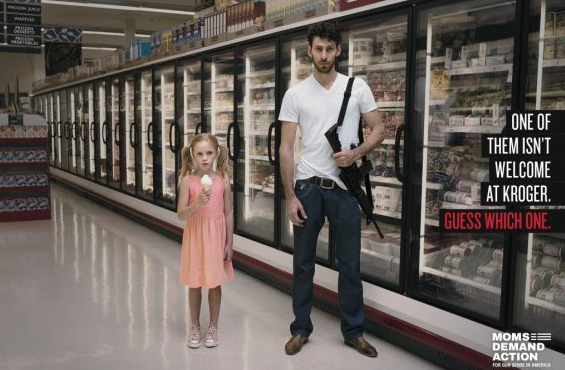 Is it me or does the girl have a certain zombie-esque demeanor? Anyway, this open carrier displays a better non-grip grip for sure. And the tall, T-shirt-wearing “Chipotle ninja” is a LOT more attractive than the open carry guys we’ve seen on MDA’s Facebook page. Speaking of which, has the average Kroger shopper EVER seen someone open carrying a long gun in a store? I highly doubt it. Which makes this ad . . . theoretical. I’m not feeling the phobia here, either. The gun guy looks reasonably respectable (i.e., not fat ‘n shirtless). The juxtaposition with a non-threatening skaterboi  – who should be FREAKING OUT (unless that’s his Dad) – further douses the image’s incendiaryness.

In fact, you could say these ads are doing pro-gun rights folks a huge favor; helping to normalize guns. Because, after all, nothing happened here. These are not the criminals or crazies MDA’s looking for. You’d have to think that guns were inherently eeevil to get even a frisson of fear from these images. Which most Americans don’t. And now, I’m thinking, fewer will.

You know what would have been really incendiary? If the gun carriers had been black. Just sayin’ . . .