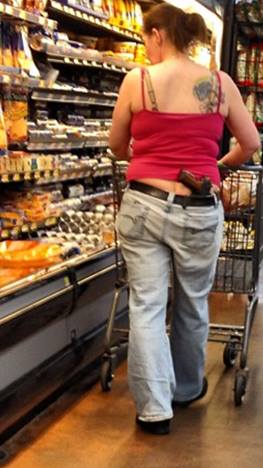 “A friend from Indiana said his niece was at an Indianapolis-area WalMart recently and took this picture of a lady she saw while shopping. Yes, disturbing on so many levels. Does this gal think she’s open carrying? Conceal carrying? Does she think the gun distracts from the fact her crack is showing? At least it appears to be in a holster… She’s not doing the 2nd amendment world any favors by being this kind of example of a gun owner  I can tell you this; if we were both reaching for the last loaf of bread, I’d sure let her have it!”