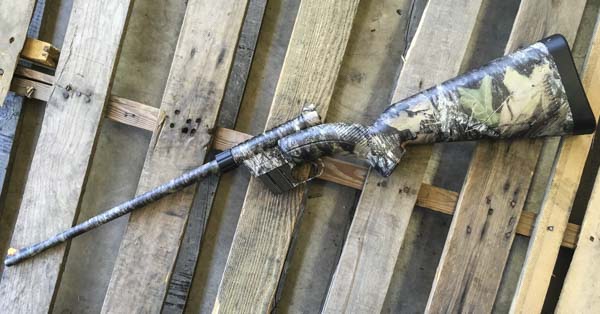 I remember the AR-7 of my youth as a finicky, fairly delicate, but super cool, fun little rifle. Today’s Henry US Survival AR-7 Rifle keeps all the cool of the old AR-7, but levels up the durability and perfects the reliability of an almost 70-year-old design, one of my childhood favorites.

The AR-7 was probably the first semi automatic rifle I ever fired. I was introduced to this rifle when I was a boy.

My friend Brian’s dad had one, and let us take it out on our many “survival trips.” At 10 years old, this consisted of putting a few things in our pockets, walking out into the woods, and staying a night or a weekend, living off whatever we had or could kill. 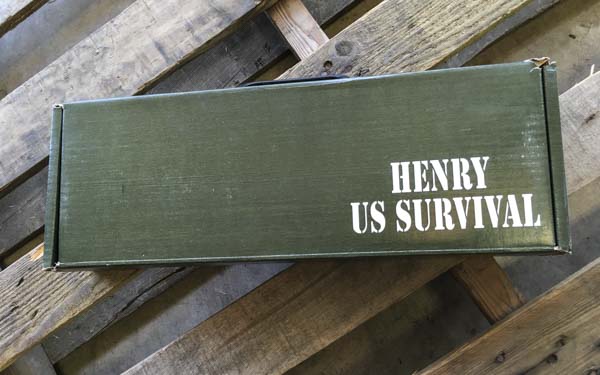 The second I opened the green Henry Survival Rifle box, all those memories flooded back. And they were good ones. This version looked a little different than the one I used as a kid. It came in Mossy Oak camo which, at least for my area, definitely does the job of concealing the gun. I’m of two minds with the camo, as I certainly want the rifle to hide along with me, but in the dark, if thing went awry, I’d like to be able to find it quickly and easily if it was spilled out onto the ground or in my truck or boat. Fortunately, the front sight is blaze orange plastic and even in low light, is quickly and easily identifiable. The entire gun, loaded mags, and all, is packed and sealed inside the butt stock. Stowed away, it is only 16 and 1/2 inches long, weighing right at 3.5lbs. 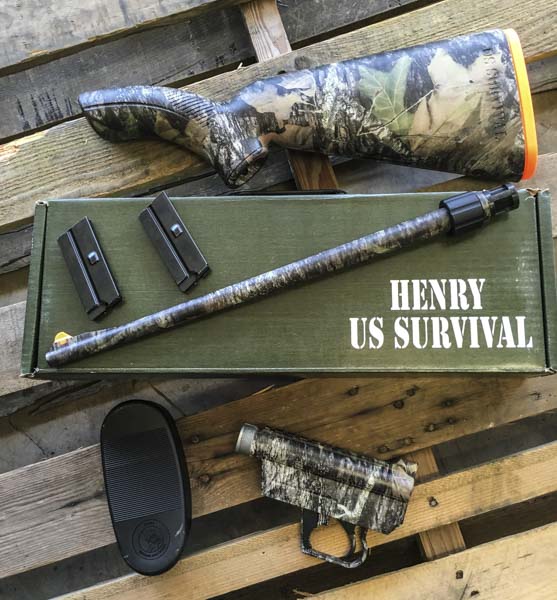 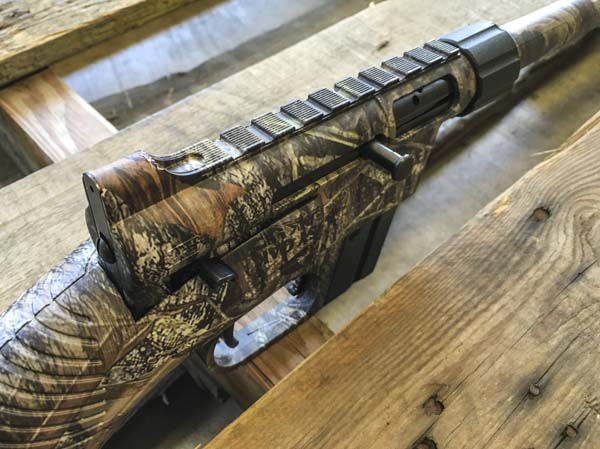 Unlike the original, Henry’s Survival Rifle has a rail integral to the receiver so that you could actually mount a site to it. You’d have to use a quick detach mount though, because it has to come off to pack everything back into the stock.

The rifle is extremely light and shoulders well. Because of the design of the stock, the receiver is actually slightly off center. I found the effect to be a little like cast-off on some of my flintlocks, and in that same vein, the sights lined up quickly with my eyes.

The controls are basic and functional. Although designed by Eugene Stoner, the AR-7 controls bear no similarity in ergonomics to the AR-15 platform. The magazine release is inside of the trigger guard, directly opposed to the trigger. Although it’s possible to push your finger forward to get it to release, that’s not optimal. It’s really best handled as a two-handed operation and is reliable and fairly quick if you’ve trained at all. The safety is a simple left side thumb lever. Like the one I remember in my youth, it flips on and off pretty easily. The charging handle is on the right side of the gun, and tucks back into the receiver when not in use. There’s a whole lot that Henry’s improved on this rifle, but the trigger is just as stiff as I remember it. It actually breaks cleanly, but you have to be committed to it.

This might be a little unfair, as the trigger should be treated in two categories; the out-of-the-box version, and as it was when I was done. It was noticably lighter after a few days and 500 rounds. That may have just been the difference between being dry vs. being lubed. As we can see in the gun’s accuracy, the trigger wasn’t so heavy that it pulled the very light barrel off target, and the break was crisp enough to be a pleasant surprise each time.

After spending a few minutes getting familiar with the simple controls, it was time to head out to the range to relive some of my youth.

I lubed up the rifle prior to shooting. I usually use RemOil as I can find it anywhere, but I’m trying out Rogue American Apparel’s Diamondback Gun Oil for a product review so the AR-7 got some of the new stuff. (So far so good.) The rifle was not cleaned or lubed again during the 500-round cycle.

Unlike most reviews, I disassembled and reasmbled the gun at multiple points to see if it would reliably return to zero. Using CCI’s Mini Mags, CCI’s Quiet .22LR, American Eagle’s Copper Plated HP, and Remington’s brass plated HPs, I had zero malfunctions of any kind. No magazine failures, no FTFs, FTEs, no trouble disassembling or reassembling, absolutely nothing. Perfect reliability using a wide variety of ammunition.

That’s a vast improvement over the AR-7 of my youth. I remember sorting through piles of loose .22LR ammo looking for the kinds that would — and would not — feed well in the rifle, and we still had a hang-up with every magazine. I’m not sure who made that rife, but today’s Henry version has none of those issues. I shot it in the rain and in the sun, threw it in a mulch pile and it still shot without issue.

Beyond reliability, the long term durability of the rifle is vastly improved. The old plastic-stocked AR-7 we used as kids was brittle, patched together with what I assume was Bondo, and there was a little rust on the bolt. Henry’s version has an all ABS plastic stock and the entire receiver and barrel are coated with Teflon. Although light, it’s in no way rickety and doesn’t have a cheap feel to any of it’s parts.

I don’t remember the gun of my youth being particularly accurate. No one expected it to be a sniper rifle (OK, every kid expects every gun to be a sniper rifle), but I remember it as minute-of-jack-rabbit at best. The Henry version? This gun is minute of jack rabbit’s eye. As usual, I do my accuracy testing a day after the reliability testing. And I didn’t clean the bore. 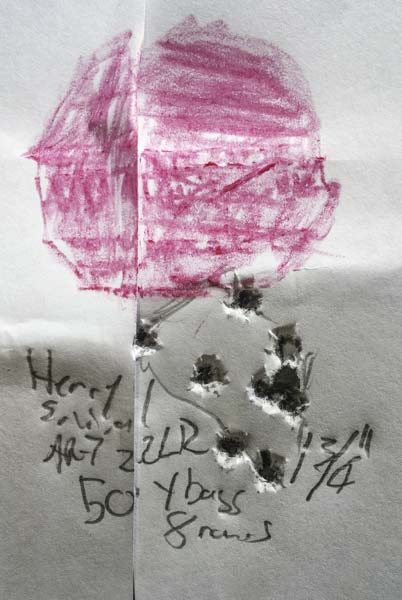 Using the supplied (plastic) sights and shooting off bags, I got consistent sub two-inch groups at 50 yards. The CCI Quiet 22s shot 1 3/4 eight- and nine-shot groups over and over again.

Using any of the ammunition, if I backed it up to 100 yards, I got six-inch groups or better every time. Old eyes make irons hard a that distance. Bring your target in closer to 25 yards and there’s no reason you couldn’t get your rounds inside an inch. Considering that this a lightweight breakdown rifle, that’s absolutely exceptional accuracy.

In order to test return to zero, I repeatedly took the barrel off and replaced it during the review. I even varied the level of tightness I put on the barrel locking nut, from only snug to as tight as I could possibly turn it. I had no discernible change of impact at 50 yards. The rear is a peep sight, the front a bright orange plastic blade. The blade is adjustable for windage with a strong push of your thumbs. When I pulled it out of the box it was shooting a solid six inches to the right at 50 yards, a quick push of the front sight got my rounds lined up with the target. I’d recommend either gluing it down once you’ve adjusted it or simply marking the barrel and sight with the correct alignment.

American Servicemen have been using the AR-7 since 1959. Once I’ve spent a little more time with it as an adult, it is absolutely no wonder. It stows away under a seat, in a bag, strapped to a pack, in a boat or a plane. It shoots any ammunition under a variety of conditions. And it’s accurate enough to provide you minimal self defense, or put meat over the fire.

Sometimes reviews are work. This rifle was fun, and with a purpose.

Style and Appearance * * *
It’s a weird little gun. No wood, and not particularly tactical. Then again, it’s not supposed to be any of those things.

Customize this: * * * *
There’s a wide variety of aftermarket parts available for these guns, including barrels and extended magazines. The rail on the top also allows you to mount the optic of your choice. But leave it as it is, as it should be.

Accuracy * * * * *
If this were a Volquartsen target rifle it wouldn’t get so many stars. But as a light weight super-reliable breakdown packaway rifle — it’s five stars any day. It shoots as well as much larger, much heavier rifles…a genuine surprise

Overall * * * * *
Henry’s US Survival Rifle takes the AR-7 I shot as a kid and turns it into what it was supposed to be; a reliable, accurate, bet-your-life-on-it gun. Since it’s easily found online for less than $250, it’s on the Christmas list. For me and my kids.