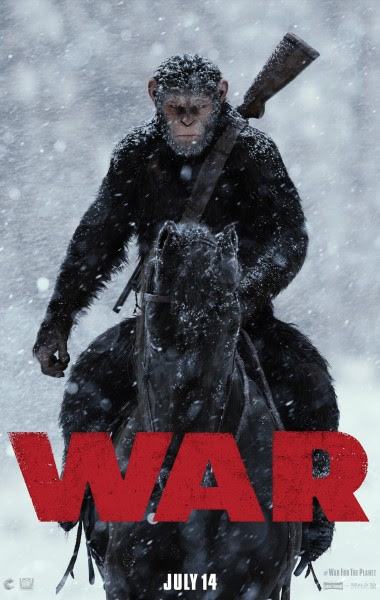 The 2017 sequel to 2011’s Rise of the Planet of the Apes is the third installment in this “reboot” film series. The film finds the intelligent apes led by Caesar doing battle with an army of humans.

Matt Reeves returns from Dawn of the Planet of the Apes to direct this film. The cast includes Woody Harrelson as the Colonel and Andy Serkis, who returns to provide motion capture for Caesar.

Two years after the events of Dawn of the Planet of the Apes, Caesar and his apes have been at war against the humans. As the apes start suffering heavy losses, Caesar wrestles with his darker instincts in order to face the Colonel and the traitorous gorilla Red.

We loved the original film series as a kid, despite how goofy the story lines became and how they began to cheapen-out on the special effects. However, we still refer to Thumbhole stocks on rifles today as “Planet of the Apes” Stocks.

There was a TV series that ran for one year (1974) that we enjoyed as a five-year old, and someone produced a cartoon series that we watched a few years later that was well-done for its time.

1970s anachronisms aside, our least favorite treatment had to be Tim Burton’s 2001 version. We like the reboot better than the original in some ways. It has a better thought-out plot and story line for starters. And lots of guns for those of us who enjoy such things.