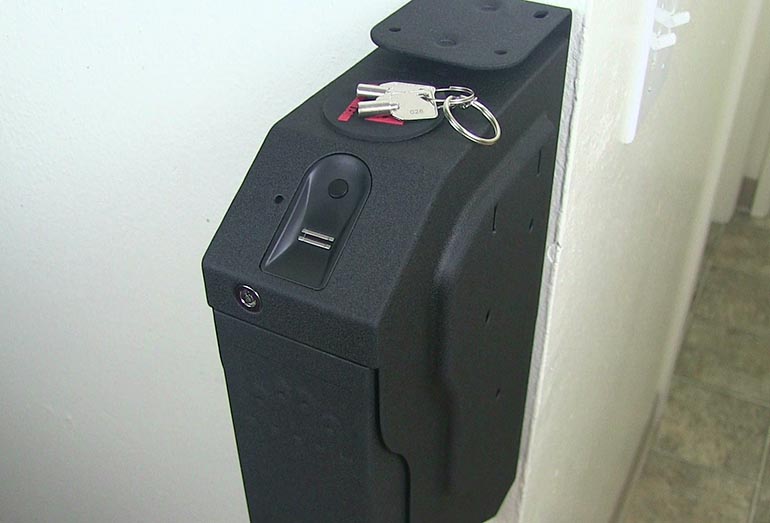 More people have contacted me through HandgunSafeResearch.com to ask about GunVault’s SpeedVault Biometric than any other handgun safe. The SpeedVault is arguably GunVault’s most popular handgun safe, though it has been on the market for roughly 10 years.

If you were to estimate how popular this handgun safe is based on the number of knock-off products produced in China right now, the SpeedVault is absolutely GunVault’s most popular handgun safe. The SpeedVault is designed to provide ready access to a single handgun, and comes in a standard keypad version (SV 500) and biometric version (SVB 500). Both take a 9V battery for power, and both have keys that allow access should their batteries need replacing. The body of the SpeedVault is made of 18-gauge steel, and its latching mechanism is the same basic spring-release mechanism installed in most of the other GunVault products. Incidentally, this latching mechanism is the single most copied design I come across in my examinations of Chinese-made handgun safes.

What I discovered within five minutes of getting it out of its box is that, yes the SpeedVault is quite vulnerable.

My initial approach involved a stick of gum—or the aluminum gum wrapper, to be specific. After folding the wrapper flat, I was able to slide it into a gap above the door and close the circuit on the delete function.

I know. You’re wondering if the non-biometric keypad version has the same vulnerability. Unfortunately it does, though with a little more fiddling required.

If there’s a lesson to be learned here it’s that manufacturers can be complacent—sometimes surprisingly so. After my 2016 paperclip opening of GunVault’s GVB 1000, GunVault should have recognized the need to test their remaining product line for security problems. But they didn’t. And they’re by no means the only company selling products with vulnerabilities such as this.

Overall: *
While the safe constructed of good materials, when all you need is a foil gum wrapper to get it open (if you know the trick), it’s hard to recommend it.