Like a fine wine or Elle McPherson, some things just get better with age. Others, however, age with the gracefulness of Steven Seagal. With the assistance of Browning and FNH, the Winchester Model 70 has matured and grown into an excellent weapon platform for the nostalgic sportsman who doesn’t want to sacrifice functionality . . .

On rare occasions, being a resident of the Southeastern United States allows me to come into contact with purveyors of fine firearms (read: fellow hoplophiles). On one encounter I met a gentleman who owned an older 1927 Winchester Model 70 and figured it would be a hell of a thing to compare a Model 70 made in New Haven, Connecticut in the 1920s to a current production rifle (made in Columbia, South Carolina). I’m no engineer, so I decided to forego delving into the technical aspects of the rifles and instead focus on comparing their fit, finish, and feel.

Both the original and current Model 70s gets A+’s across the board. The crown on the older rifle is not as sharp but I doubt that has to do with inferior craftsmanship and more to do with decades of wear and tear. Hell, this gun was 60-some years old when I was still in diapers. The walnut stock on the classic Featherweight is a little nicer than the wood stock on new rifles, but in all fairness, the original rifle had an aftermarket mani-pedi done by a local smith about 30 years ago. Did I mention the local ‘smith also regularly did restoration work for the Smithsonian? If modern-production Winnies came with that kind of attention to detail, they’d be triple their current MSRP. The original Model 70 has, of course fired (tens of?) thousands of rounds through it, so the action has had a 70-year trigger and action job done to an already hand-polished rifle. (Newer Winchester rifles feature Winchester’s M.O.A. Trigger System, which boasts zero creep, zero overtravel and zero take-up.) It’s so smooth, the bolt may as well be resting in a teflon chamber dripping with Astroglide. The new Model 70 is stronger but lighter by virtue of CNC-machined superior steel. That translates into more recoil, but the Winchester Featherweight isn’t a target gun, it’s a big game hunting rifle.

Enough beating around the bush, though. It’s time to get to what many oldtimers or bolt-gun enthusiasts are wanting to hear.

“What the hell is controlled round push feed (CRPFS)?”

It’s an amalgamation of a controlled round feed system (CRFS) and a push round feed system (PRFS). A CRFS gun’s claw extractor grabs the rim of the cartridge and “controls” it the entire way from the moment it leaves the magazine until it’s in the chamber of the rifle. Whereas a PRFS gun’s extractor doesn’t grab the round’s rim until the bolt is fully closed on a chambered round. The pros and cons of each system can get mind-numbingly technical. All you really need to know is that you can’t easily single load or short stroke a CRFS gun. “How the hell can the rifle be both?”

Technically it can’t. The CRPFS is basically the Post-1964 Winchester Model 70 action with the lower portion of its bolt face ground flat. This allows the extractor to slide over the cartridge rim without having to skip over it. In theory, you have the advantages of a secure CRFS extractor while being able to single-load like a PRFS gun.

“Why should I give a damn?”

If you’re the average Joe Schmoe hunter, you shouldn’t. It basically doesn’t affect accuracy or the gun’s performance. If you’re a purist or a benchrest shooter, it matters because the original Winchester Model 70 action is a Mauser action complete with CRFS. 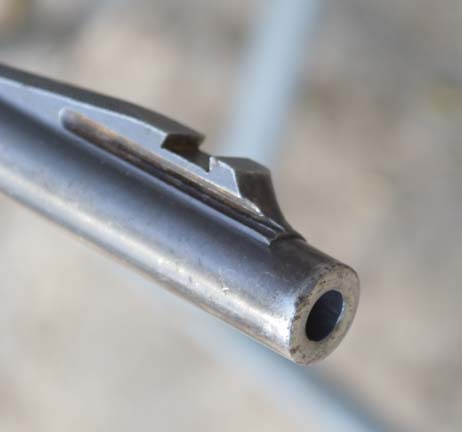 Some people may argue that the weapon’s inability to single-load rounds was the reason it wasn’t adopted for use in official military service. Nevertheless, this reviewer could find no mention among government documents verifying the veracity of that rumor. Sorry guys, I love ya, but I’m not going to submit a FOIA request when I’m already on enough NSA watch lists for posting on this site. My guess would be that the enormous stacks of Springfield ‘03 rifles the military had on hand would have made deploying a whole new weapon system a tough sell to the penny pinchers in D.C.

The old Model 70 earned the title, “The Rifleman’s Rifle” back in its heyday but does it still deserve the moniker? Absolutely.

I took this hard-hitting lightweight bolt-action hunting rifle to my local range and tested the accuracy of both a cold bore and hot barrel (after 50 rounds). The gun’s point of impact shifted by such a small degree I would be hard-pressed to blame it on anything other than user error. 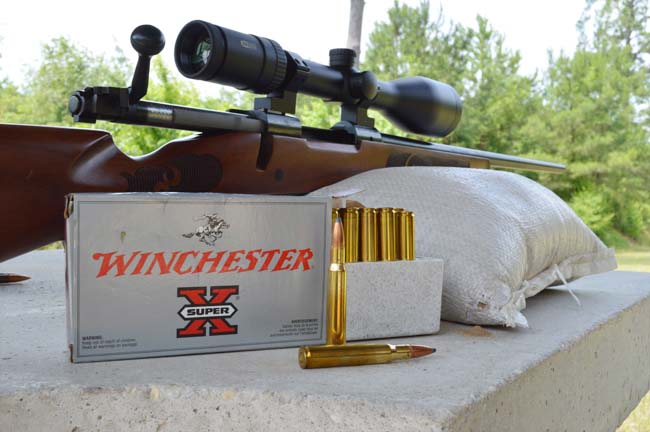 Some may argue that the .30-06 cartridge is too much power for such a lightweight rifle. Those people have never had to lug gear five miles to a tree-stand. The recoil from the Winchester Model 70 Featherweight can be punishing, but the rifle is designed for a hunter to hike with it all day and shoot sparingly. Not to say that the gun won’t keep ticking after countless (internal) magazine dumps. It will. In fact your shoulder will quit long before the time-tested Mauser action of the Model 70 will give out.

The Model 70 meets and exceeds expectations as a hunting rifle. Sporting a pencil-profile light 22-inch barrel, the Model 70’s shot groups barely grew as the barrel’s temperature increased. And boy did that barrel get hot. After 25 rounds the barrel was too hot to handle without gloves. Even with surplus ammo the Model 70 was still an effective lead-delivery system. This might not be a huge deal to the average hunter who zeroes his rifle once a year right before deer season and leaves the gun/optic to gather dust until the following one. But for plinking it’s good to know that your shots are landing where they are supposed to. After blasting away merrily thoroughly testing the firearm I had the bright idea of seeing how the light rifle felt during some off-hand shooting. I was impressed; the gun isn’t balanced like a fine over/under shotgun, but it points easily. I was able to blast bowling pins and plink my Practical Pinger with boring regularity. (Thanks Salute Products!)

The Winchester Model 70 is the quintessential deer rifle for the hunter with too much heavy gear. The Featherweight setup won’t do anything to soak up recoil, but you’ll be praising the weight of this bolt-action rifle when you carry that 10-pointer back to your truck.

Drilled and Tapped for Scope: Yes

The Model 70 rocks a classic sporter rifle stock with attractive finish, clean, cut checkering, and beautifully jeweled bolt. The only thing that would have made this any better looking would have bit a deep blue hand-rubbed finish. But that’s a personal preference.

The Model 70 offers a nice balance of functionality and aesthetics. The bolt knob and forearm feature aggressive yet handsome checkering. If the Model 70 sported an adjustable comb and LOP it would be flawless.

It’s a bolt gun and didn’t experience a single failure in the 300-odd rounds I put through her during the evaluation. I didn’t even manage to short-stroke the rifle while trying to “rapid fire” while plinking. Absolutely perfect.

Mostly every conceivable accessory that exists for more popular bolt guns like the Remington 700 is available for the Model 70. There are a few exception such as the Accuracy International AICS stock. That said, McMillan makes functionally identical furniture that will work with the Model 70. Basically the only limit is your wallet.

I was completely taken aback by the Model 70’s performance and handling. I had tried similar offerings from Remington, but they felt cheap and their actions weren’t nearly as smooth. If you’re looking for an easy-carrying, hard-hitting hunting rifle, you’d be hard-pressed to find one as handy as the Model 70.