At some point, you just get lucky. My future father in law letting me borrow his Savage Model 12 LRP in .243 WIN is one of those points. He bought the gun last year for long range target shooting with some varmint hunting mixed in for good measure. Unfortunately, his work schedule has been pretty insane for the last few months and he actually hasn’t had a chance to do much more than warm up the barrel and get it roughly sighted in.

Listening to him recount the sad story of his ownership a few weeks ago, I (jokingly) offered to take it off his hands for a few weeks. To my surprise he replied, “Really? You’d do that for me? I just want to know what factory ammo works well with it, and make sure it’s properly sighted in.”

Then he handed me about a hundred rounds of 58 gr. and 80 gr. Hornady V-Max and sent me on my way. Maybe I should buy a lottery ticket. Not only is this one of Savage’s premium long range rifles, my FIL has also topped it with a Leupold Mark 4 ER/T 8.5–25 x 50 mm scope. I briefly considered reviewing the scope too, but realized that I probably shouldn’t push my luck by moving it over to my AR for testing. Not to mention the fact that putting $1900 scopes through their paces is more Nick Leghorn’s specialty.

Suffice it to say that having a first focal plane scope with some of the clearest glass I’ve ever seen is a mighty nice perk. Oh, did I also mention that it’s chambered in my absolute favorite cartridge, .243 Win? Right. Luck, stars aligning, etc. 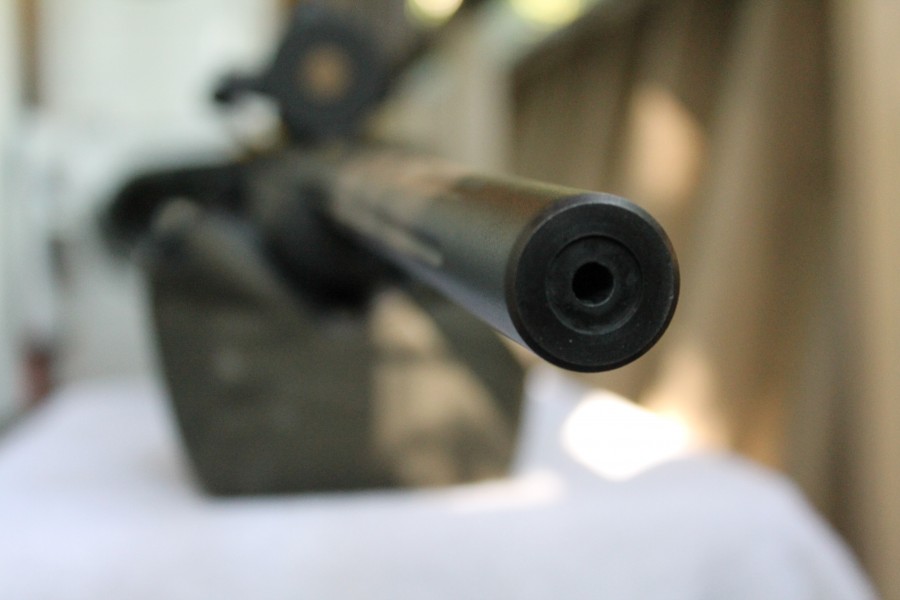 On the surface, this is your typical long distance varmint rig. She comes equipped with a heavy fluted barrel, all black everything, a comfortable fiberglass stock, and of course, the Savage AccuTrigger.

This is my first time spending any significant time behind an AccuTrigger and I was definitely pleased. When it works, it works great. More on that “when” thing later, though. First, let’s talk comfort. The HS Precision stock the Model 12 wears is mega comfortable. It’s nicely textured with all the right places to put your hands and sandbags. As I’ve mentioned in countless reviews, my hands are small so what most shooters consider average size controls run a little large when I’m using a gun.

But I didn’t have that problem with the Savage at all. In fact, I spent about two and a half hours during this test behind the controls with no issues. When you are stalking a field of groundhogs or calling coyotes, you need to be able to sit with your rig for extended periods. The Savage fits the bill nicely.

That said, here’s my one gripe about the stock. As I have found with just about every single modern rifle, the stock comb is cut too low for use with a 50mm objective riflescope.

Note to manufacturers: when you ship a gun without iron sights, it’s probably going to get a scope, OK? For a company that prides itself on accuracy, you’d think gunmakers would pay attention to proper cheek weld. Luckily my FIL feels the same way and has an aftermarket Blackhawk cheek riser attached. Problem solved.

One last note about comfort. As tested, this gun tops the scales at about 14 pounds. That much weight does wonders for soaking up the recoil of the very zippy .243 Win rounds.

Whereas I can do about forty rounds with my little Ruger Mark II before I throw in the towel, I had no problem slinging hundreds of rounds downrange with the Savage. Bigger really is sometimes better. Accuracy is, in a word, superb. Since my FIL wanted me to report back on what the Savage ate best, I took the opportunity to run a bunch of different ammo. I tested six types from different manufacturers, price ranges, and bullet weights.

I use the average group radius method for measuring consistency with all my tests. For those wanting to know more on the method, I may make a request to our resident math nerd. All tests were done with a clean, room temperature barrel at 100 yards at my local indoor range.

None of these are slouches, but the V-Max Moly and Black Hills really floored me. Take a look at the targets to see why. Keep in mind that I was using paper with quarter inch grids.

The real joy, however, was seeing how it shot hot. And I mean really hot. I’m used to getting three shots down the barrel of my Ruger before I have to let it completely cool. Otherwise, I’ll start throwing shots all over the paper. The Savage on the other hand doesn’t seem to care one bit. As a test of this, I fouled the barrel with five rounds and then put ten rounds of the copper jacketed 58 gr. V-Max down range. That big fluted bull barrel was too hot to touch with bare hands when I was done.

My average group radius for those ten shots measured .540 inches. Reference my table above and you’ll see the exact same measurement for the cold bore test.

Next I left the barrel fouled (and very hot) then put five rounds of 58 gr. Hornady V-Max Moly downrange. My average group radius for that test was .399 inches vs. .406 inches for the cold bore test. The numbers don’t lie. That big nasty barrel makes all the difference when it comes to repeatable shots downrange. As equipped, this Savage has a factory trigger measured in ounces. As all AccuTriggers are, this one is adjustable for pull weight. My RCBS scale only goes down to 8 oz, so the lower threshold is a best guess, but I would peg it at somewhere in the neighborhood of 5 oz with an upper limit of 10 oz.

The break is oh-so-very crisp with no over-travel. Funny thing is, with a trigger that light, the little AccuTrigger safety acts almost like a two stage trigger. In fact, the first few rounds flew wild as I mashed my way through the safety zone and kept right on chugging.

Time for the bad news folks – this particular AccuTrigger was a dud. As I mentioned earlier, this is not my first time behind the AccuTrigger. My good friend Jon has a .270 that I’ve run on past occasions with no issue. Savage has a fine product on their hands, but this particular trigger just is not one of them.

When it works, this is the finest damn stock trigger I’ve ever used. The issue is that the “times it works” are fewer than “times it doesn’t.” Unfortunately I am not a gunsmith, so I can’t diagnose the cause of the issue. But I can tell you about the effect. At the lightest setting, the trigger will function properly every other time while cold. While hot, that number goes to one in four.

This presents two problems. The first is that the AccuTrigger safety bar will not disengage. As you start squeezing, you’ll find the whole unit is locked down. The second is that the safety bar will work, but before you get to the trigger there will be a loud click and the trigger can’t be depressed. At first, I thought that I had a dud round only to find that some piece of the mechanism had tripped.

With the trigger set to the heaviest pull weight (10 oz), the second problem goes away, but the first persists. However, it only does it with 100% repeatability when you vigorously cycle the bolt. When the bolt is slowly cycled, the problems disappears. As nothing more than a gun enthusiast, my guess is at best uneducated, but YouTube user cmac860 has a perfect video showing the same problem I ran up against.

If this gun belonged to me, it would be in a box headed back to Savage for some fixing. End of story. Accuracy: * * * * *
I was astounded with how accurate the LRP was with factory ammo. I consider the Black Hills ammo to be as close to handloads as factory can get and they made a ragged hole save for that one flier. I have no doubts that a handloader could have this rifle drilling ragged holes at 100 yards and beyond.

Ergonomics * * *
I’m grading harshly here because of the stock comb issue. Savage has plenty of rifles with stocks cut for optics use. This one shouldn’t be any different. That aside, the LRP is a joy to shoot for extended periods of time with an aftermarket cheek riser. Eleven pounds of gun and 3 pounds of scope do wonders for taming recoil.

Reliability * *
I should not have to downgrade a bolt action rifle on reliability, but here we are. This gun needs to go back to Savage for some AccuTrigger TLC. Until then, two stars for the LRP, and that is only because I did not experience a FTF or FTE.