Back in the day, I ran economic development for Texas. Convincing firearms manufacturers to move or expand in The Lone Star State was one of the favorite parts of my job. I didn’t think H&K would ever be one of my targets. But then, lo’ and behold, there I was, sitting in the Governor’s office with the CEO of H&K, telling me how H&K was going to start making guns for the U.S. civilian market . . .

Why now? I asked. We never thought about it, he answered. Germans don’t carry guns. Then someone in the company pointed out that U.S. civilians accounted for about 25 percent of all of H&K’s sales. Ears were perked. Eventually. He assumed it must be a rare thing, maybe it’s people in the countryside carrying pistols on ranches? The Governor and I answered by showing the exec our carry guns. He was shocked.

Sadly, H&K chose not to expand in Texas. Several years later they chose a manufacturing site near their sales office in Georgia. But the shift to the civilian market was immediate, and real.  Enter the H&K VP9, their striker-fired everyday carry-sized compact pistol. Thanks in large part to the VP9, the American market now accounts for forty percent of H&K’s sales. H&K’s smaller VP9SK model (above) is the latest addition to the family, designed to capitalize on big brother’s success. HK bills the SK as their sub-compact. While there’s no real definition of what gun sizes mean, this certainly stretches the definition.

If you want to bracket it, the VP9SK is in-between the size of a Glock 26 and a Glock 19, and just barely smaller than the G19. I guess if an M16A2 is a carbine, the VP9SK is a sub-compact pistol. Good luck ankle carrying this one. The junior pistol is all of about two shots of Kuemmerling less weight than its senior. I don’t see the cost of a shorter barrel and the corresponding shorter sight radius, as well as the grip length reduction, worth the very small change in the overall footprint of the gun. The VP9 is a very easy gun to carry already, both inside-the-waistband and outside-the-waistband. The SK’s shortened handle does print less, but it’s nothing a little forward cant in an IWB holster wouldn’t solve.

All of the controls — for both normal humans and shamefully afflicted southpaws — are ambidextrous, placed within easy reach. With the SK’s flush fit, 10-round magazine installed, my pinky tucks underneath the handgun’s handle. Since my palm is slightly longer than the handle, I had to loosen up my grip to get my palm away from the magazine to allow it to drop freely. This isn’t much of a problem; I didn’t have to shift my grip on the gun itself. It is, however, something I had to train for.

The H&K VP9SK ships with a second, longer magazine. As you’d expect, the pinkie extension made a cozy home for my last finger. In two-handed fire, the extra purchase doesn’t make a huge difference, but it’s a definite plus for single-handed work.

On a “subcompact” something’s got to give. But not everything. The SK’s a good size with excellent texture and an excellent grip angle. The finger grooves — more like swells — helped push my hand up higher on the gun, exactly the opposite of what most finger grooves do.

The SK’s shortened grip still has the same great feel as the original VP9. It includes different back straps and different palm swells. As I do on most pistols, I chose the largest size of each, thickening the grip a good bit. For most pistols (including the SK), the choices position my trigger finger in a better place for a smooth, straight back pull. With the VP9SK, the palm swell’s increased size had an added benefit. The VP9SK’s slide release is fairly light/easy to release. There was nothing I could do to keep my thumb from migrating to the frame in long strings. So I never got the slide to lock back on an empty magazine when holding the gun two-handed. With the thicker palm swells, my non-firing thumb sat slightly farther away from the frame. When my firing thumb laid on top of it, I finally had enough room to keep my thumb off the slide release. Mostly. 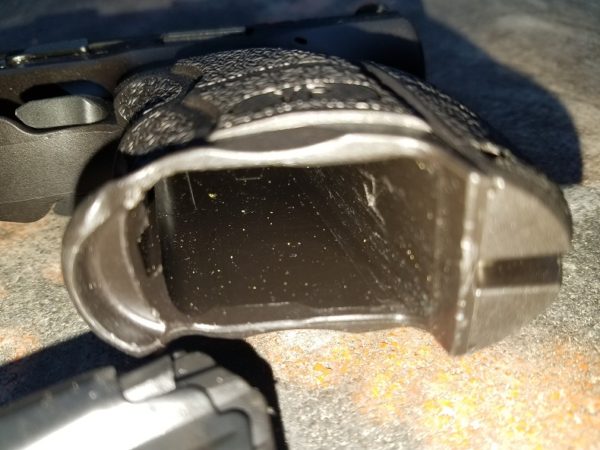 The VP9SK uses the same “European style” paddle magazine release as the VP9. Two small wings extend on either side of the trigger guard where it meets the frame. To release the magazine, push either side down. It’s very different than the traditional thumb button mag release, but at least as effective.

The first time I saw this system I thought it would be a challenge. It’s not. Pulling my firing hand’s middle finger off the handle to depress the release is super simple. It’s even easier if I’m bringing the gun up in front of my face — where it should be during the magazine change. I found the paddle intuitive, requiring less of a shift in my grip than a button style release.

The challenge: going back to a standard magazine release after this review. Whenever I wanted to drop the magazine of my G19 review gun (watch this space), I found myself hitting the trigger guard. Bottom line: shooters should stick with one style release or the other. They both work well on their own, but switching back and forth does not. The SK’s sights “glow in the dark” — like that super rad poster on your ceiling back when you were in middle school. After range day, I put the SK in its case. When I pulled it out an hour later in a dark room, the sights were still plenty visible. Even so, I worry about them “failing” after sitting in a holster all day.

With a light held in an ice pick grip at my temple — how I actually like to use a light — the flashlight’s ambient light illuminates the sights enough to see both the sights and my target just fine. Even so, I’d much prefer the tritium sights on the LE version. The $100 price increase for the LE model, which also includes three magazine instead of two, is well worth the price of admission.

HK smoothed out most of the SK’s edges. For a carry gun, that’s generally a good thing. If you’re trying to rack the gun one-handed — to either fix a malfunction or load a new magazine — not so much.

I was hoping the removable “charging assist inserts” on the back of the slide would be sharp enough to use for a one-handed reload, but the front of the wings are beveled away, leading to another ramp to the rear. Every everyday carry gun should have a ledge rear sight that can be caught on a pocket, belt or shoe sole. The VP9SK also sports a cocked striker indicator. Once the pistol’s placed back into battery (after charging), a red dot appears in the rear of the slide. Technically, the SK also has a loaded chamber indicator. Clock the red markings on the side of the chamber. You’ll need sharp eyes to tell the difference. (Hint: bottom pic is loaded.) The H&K website boasts that its trigger is “unmatched in production striker fired pistols.” H&K, Walther shooters would like to have a word with you. A PPQ-beater the SK’s trigger is not. But it’s quite good; fairly short with a perfectly positive reset. After a couple of small starts and stops,the SK’s trigger breaks at just over five pounds.

Note the SK’s MIL-STD-1913 rail. Ahem, I meant GLOCK: note the MIL-STD-1913 rail. Speaking of Gaston, the SK weighs six ounces less than a Glock 19. But it sure doesn’t shoot like it. Given its size, the VP9SK is a low-recoil pistol with little muzzle rise.

For this review, I put 500 rounds through the SK. Most of those were IMI’s 115gr die cut rounds (no lack of joy in the irony there). I also fired Cap Arms 115gr FMJ, Cap Arms 147gr FMJ, Federal Premium HST 124gr +P round and Remington HTP 9mm HP round. I had one reliability issue. On round 158, using the IMI 115gr round and the factory magazine, I had one failure to completely return to battery.

A quality trigger, good frame geometry and a quality polygonal barrel helped the smallish pistol achieve better-than-average accuracy. Well, with some rounds. The 147gr Cap Arms FMJ round was the best shooter, at 2.5″ five round groups averaged over 20 rounds total.

[This is a particularly easy-shooting round that tends to score well in a range of pistols. So of course Cap Arms is no longer making it.  I’ll be searching for another subsonic 9mm round that tests well for the future.]

IMI’s 115gr die cut round averaged just barely over that, at 2.8″. The outliers were the Federal HST 124gr round and the Remington 115gr HTP round, both of which averaged at a full 3.5″. All groups were shot off bags at 25 yards. 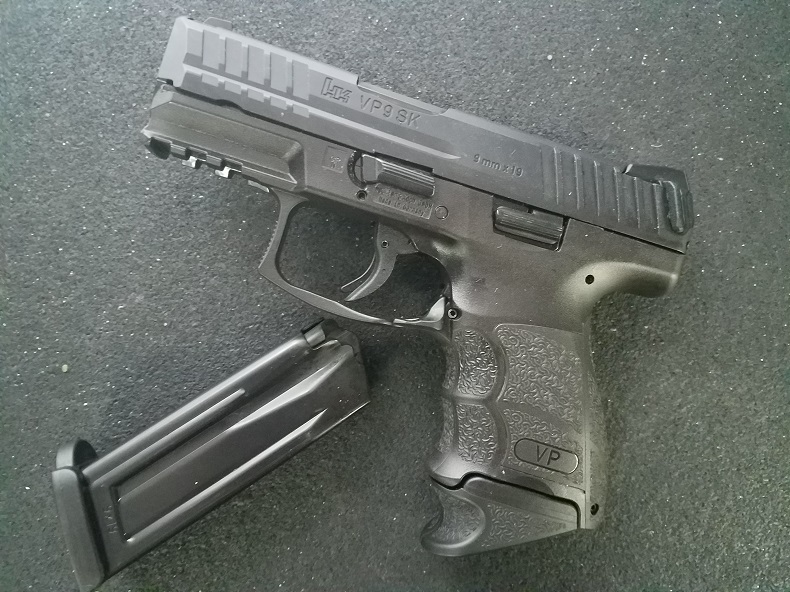 Shooting the VP9SK reminded me why I like the VP9: it draws and shoots well. The SK naturally points to the target. It shoots fast. And the sights fall back down in recoil quickly and predictably. If you don’t have a VP9, and are looking for a very slightly smaller version of that same pistol, this is the gun for you.

That said, I think the VP9 is a great size as it is. The SK version, although it shoots very well, just doesn’t reduce the size enough to make up for the loss of real estate of the grip, sight radius, and barrel length.

Style and Appearance * * *
The simple utilitarian look of multiple geometric shapes with little or nothing to tie them together.  But German.

Customization * * * *
You can hang a light on it. Multiple back straps and palm swells are offered, as well as sight options. I expect it to follow the big brother and eventually offer threaded barrels and multiple colors.

Accuracy * * * *
Sub 3″ accuracy at 25 yards is ok for a full sized gun, but earns this “subcompact” an additional star.

Overall * * * *
The VP9 has been a solid performer since day one, and the sub-compactish version is no different. Easy to carry, quick to point, fast to recoil and more accurate than other pistols of its size. Points off for good, but not stellar accuracy, mediocre sights, and not much change from the “standard” version.