After spending some quality time with Henry’s Frontier Model Long Barrel 24″, a fine .22-caliber lever action rifle that helped me regain a bit of my wishful childhood, I was left wanting little more from a lever action rimfire target and small game shooter. Then I opened the Small Game Carbine . . . 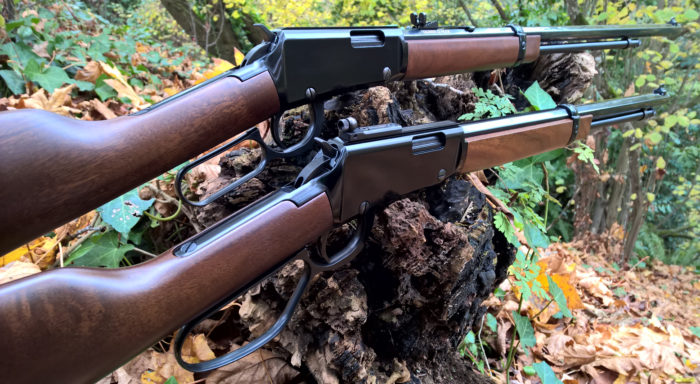 The .22 Magnum Henry Repeating Arms Small Game Carbine (above, bottom) is quite literally the cooler, tougher brother of the sleek-sister Frontier Model Long Barrel 24″ (above, top), and for good reason.

The two rimfire rifles were cut from the same Frontier Model cloth, but with a shorter barrel, larger lever loop, Skinner sight, and more powerful caliber (though it’s also available in .22 LR), the Small Game Carbine is a serious step-up for small game hunters. 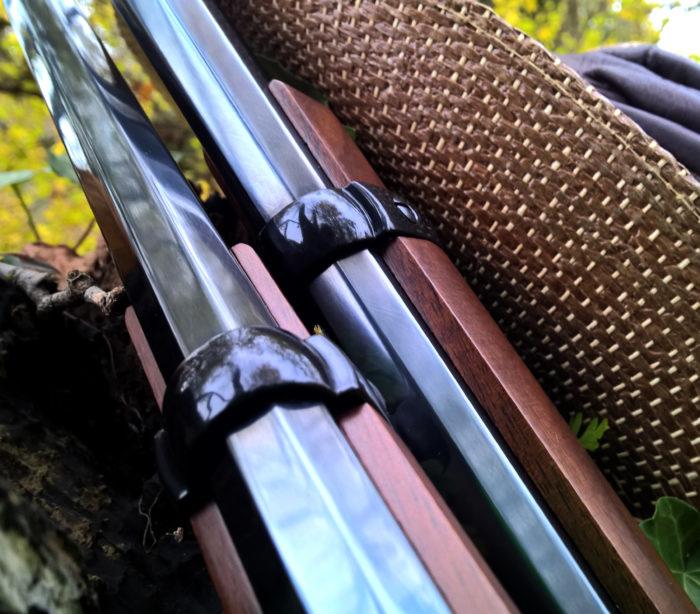 At first glance, the most obvious change is the length of the 16.25-inch blued steel octagon barrel. What the shorter barrel gives up in the way of sight radius it rightfully earns back with quicker swing and more compact profile. The reduced length is also the primary cause of its 5.75-pound weight, a 1.75-pound reduction from the 24″ LR Frontier model. 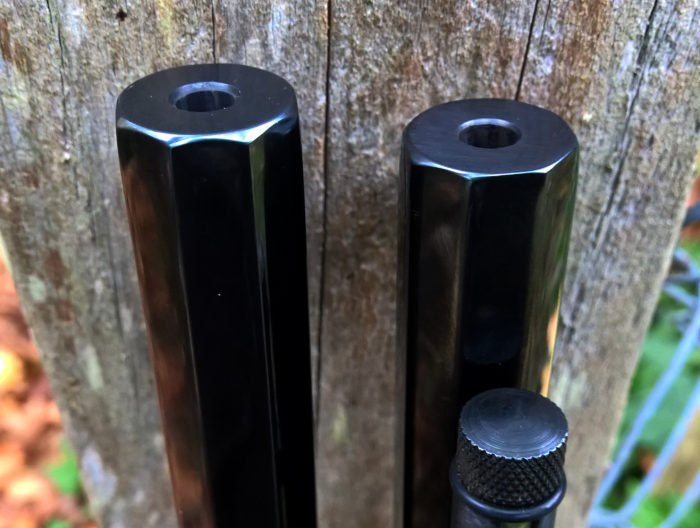 Like its sibling, the Small Game Carbine sports a nice flat crown and 45-degree chamfer that is somewhat consistent across models (above, right). Upon further inspection of the barrel, shooters will notice what is arguably the most exciting upgraded feature of the Henry Small Game Carbine rifle – a bump up to .22 Magnum (aka .22 WMR). However, the magazine tube is shorter to match the carbine-length barrel and the cartridges longer, so capacity of the dovetail-set tube is limited to nine rounds. The large lever loop is most likely the second most noticeable feature, and the only “embellishment / extra” listed for the Small Game Carbine. In fact, only two “embellishment / extra” features are available throughout the entire Frontier Model line of rifles. “Suppressor-ready” being the other feature; found on the Frontier Model Long Barrel Threaded Barrel 24″ rifle.

Designed to accommodate gloved hands and make shooting bigger-bored rifles more comfortable, the large loop isn’t exactly necessary for this caliber. However, it’s a welcome addition for those planning to draw this carbine from a sheath – or anyone that prefers a little extra finger room. Mechanically, the lever takes charge of a high-quality black-finished aluminum receiver that plays host to a “Slickest Gun in the West” action. And with a silky-smooth feel and distinct, resonating feedback, the Small Game Carbine’s action lives up to its name. 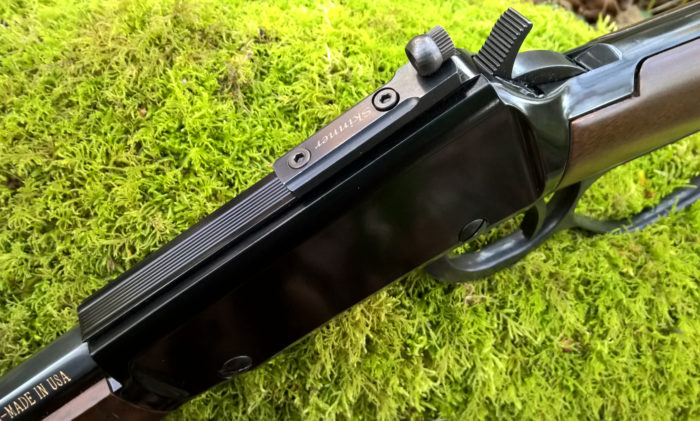 Now, this isn’t the most precisely-made rifle in the country, and on paper it’s a lower-end model, but I was impressed with how well Henry buttoned-up the Small Game Carbine rifle’s receiver. The folks making these rifles clearly take pride in their work. Atop the rear of the receiver sits a solid steel Skinner sight. Equipping the Small Game Carbine with this style of rear sight is ideal for small game hunting because it allows the hunter more visibility around the bead. And given critters’ propensity for perpetual, stop-and-go movements, a Skinner sight can aid with quick adjustments and follow-up shots.

Fully adjustable, the sight pivots off of the forward top screw for windage adjustment. A small set screw on the side of the sight releases the peep which, when rotated, allows for changes in elevation. Skinner peep sights offer a range of interchangeable apertures to suit each shooter’s needs. The Small Game Carbine came with a “Standard” model screw-in aperture (0.096″)(above, left). Removing the aperture insert returns it to a wide-open “Ghost Ring” (0.200″)(above, right).

A top view of the two Frontier Model rifles (above) shows the difference in rear sighting systems. The Small Game Carbine (above, bottom) has a drilled and tapped receiver, while the Long Barrel 24″ (above, top) has a dovetail cut in the barrel and accompanying set screw. 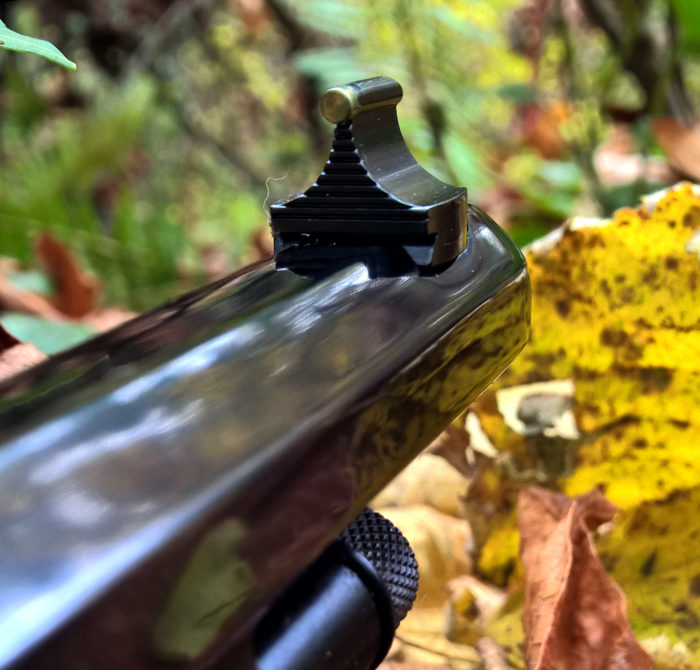 Henry kept the bright brass adjustable front bead consistent across all Frontier Model rifles. It looks just as good atop the Small Game Carbine, as any. If your preference is glass, the 3/8″ dovetail grooves paralleling the top of the receiver play impeccable host to a mounting bracket such as the BKL Technologies BKL-261 scope mount, which was used in conjunction with a Vortex Diamondback 2-7×35 Diamondback scope for accuracy testing. True to the Frontier Model line of rifles, the Henry lever gun features a 1/4-cock safety. It can be enabled with either a round chambered or an empty chamber by simply pulling the hammer back about 1/16-inch to 1/8-inch until it clicks. When engaged (above, right) the trigger will be unable to release the hammer. 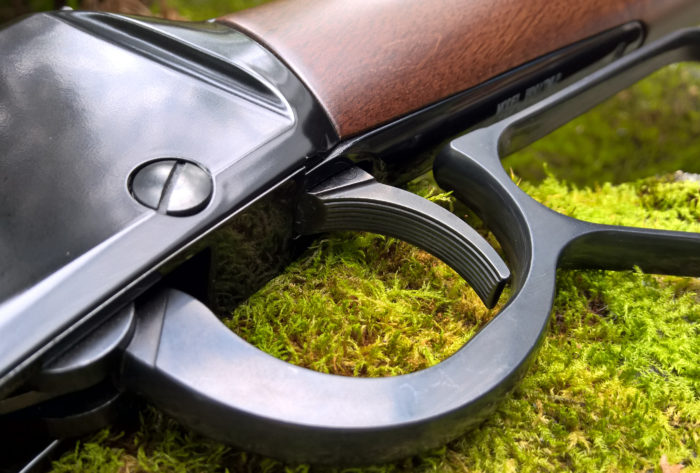 The Small Game Carbine’s trigger appears to be the same as the Long Barrel 24-inch rifle; classic grooved curved-blade trigger sits fourteen inches from the end of the stock. It’s both comfortable and controllable.

However, the trigger’s sequence is an improvement over that of the Long Barrel 24-inch I reviewed. The Small Game Carbine’s trigger has zero take-up, just about 1/16-inch of smooth creep, and an abrupt and crisp break at 3.2-pounds. The Carbine’s American walnut furniture is once again above its pay grade. Very well-finished and extremely smooth to the touch, the guys at Henry put together a nice matching set of dark pieces for this rifle which display a pleasing grain. 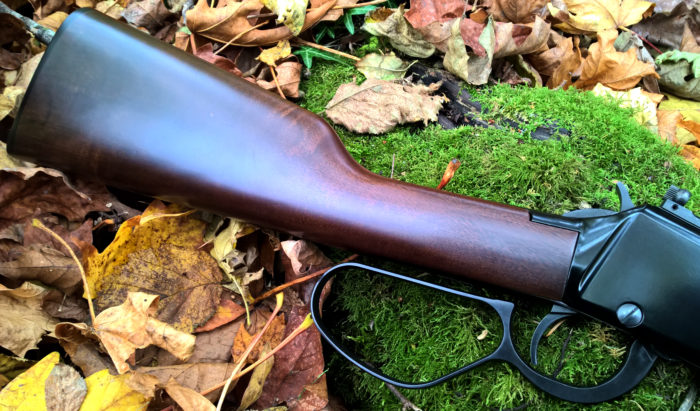 As previously experienced, the buttstock and end plate were seemingly finished as one piece and are seamless to the touch. The end plate’s polymer composition detracts from the overall quality feel of the rifle, being as it is the only plastic part to be found. On one unfortunate instance the rifle, up in a vertical wall rack, tipped over and contacted another rifle about a foot away. It was seemingly a light contact, but proved to be enough to put a nice ding (above) in the forestock — one that surprised me, given how well the rest of stock has held up during testing. At the range I set up for standard accuracy testing and some good-old-fashioned plinking. I found the Caldwell Stinger to be the perfect rest for the rifle, allowing consistent, unobstructed cycling of rounds without breaking my sight picture. 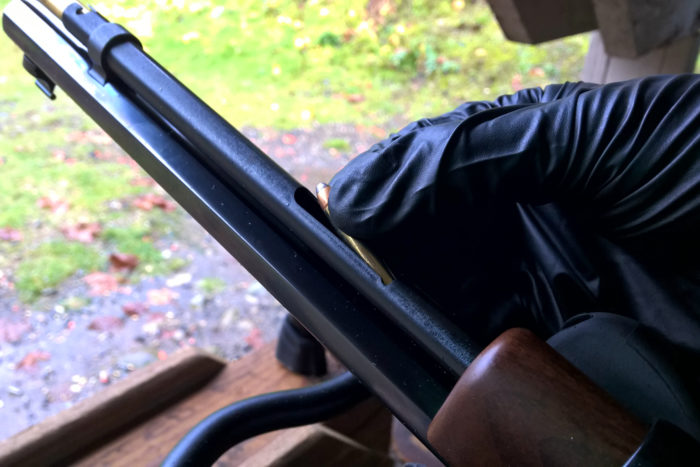 Rounds are loaded into the Carbine one a time through the loading port, located in front of the forestock on the underside of the magazine tube.

Once the spring-loaded magazine tube has been removed, simply line up the shape of the cartridge to the shape of the port and drop them in. If the round you’re attempting to load isn’t the same shape as the port, don’t load it!

Given I was practically attempting to dodge rain drops, the Henry Small Game Carbine fared well on paper. At 50 yards CCI’s 40-grain MAXI-MAG HP managed 0.78″ groups while Armscor’s 40-grain JHP measured in at just under an inch, 0.99″.

I was rooting for the Hornady V-MAX but, unfortunately, even with consistently-great 3-shot groups, I just couldn’t put tougher a respectable 5-shot group with it. Shooting a gun on the bench is what it is; there’s a purpose. But a lever gun is mean to run free, swinging from target to target with report on arrival. And I’ll tell you, the Small Game Carbine is just as fun to shoot as most MSRs. It’s extremely maneuverable, reliable, very accurate, and has a manageable recoil that will put a smile on any shooter’s face. 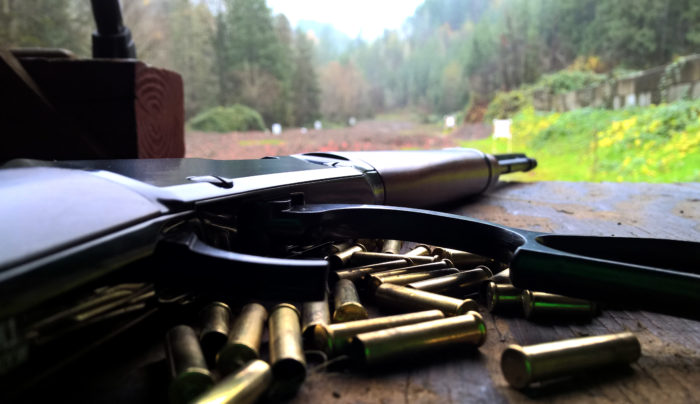 The Henry Repeating Arms Small Game Carbine in .22 WMR is a fantastic lever action gun. The $125 price increase over its 24″ Long Barrel relative doesn’t quite feel right to me, but the shorter barrel, larger lever loop, Skinner rear peep sight, and .22 WMR caliber sure do feel great.

Additionally, with a very smooth action, reliably accurate octagon barrel, and American walnut furniture, this Frontier Days lever action rifle is a classic gun to consider for your collection, cabin, or caballero accoutrement.

Quality: * * * * *
From the American walnut stock and foregrip, Skinner rear peep sight, and large lever loop, to the “Slickest in the West” action, Henry Repeating Arms is committed to delivering a high-quality product.

Reliability: * * * * *
Henry’s Small Game Carbine cycled, fired, and ejected all 40-gran and 30-grain .22 WMR loads we tested from a variety of manufacturers.

Accuracy: * * * * *
This .22-caliber carbine’s 16.25″ blued-steel octagon barrel has no trouble touching rounds on paper. I wouldn’t hesitate to take the Small Game Carbine out on a small game hunt.

Overall: * * * * *
I don’t consider .22 WMR to be a “plinking” or target practice load. It’s a small game hunting load. Henry Repeating Arms’ lever action Small Game Carbine does the caliber justice with a host of top-notch features and a nice octagon barrel that can surely take any game within its Skinner peep sight.