My first everyday carry pistol was a Colt Government .380. By the time I was old enough to carry it, I’d forgotten where it came from. So I took it apart and discovered it was a modified U.S. Government-issued firearm. That made it a collector’s piece, which turned out to be a blessing. Because collector value is really about all the Colt had going for it . . .

The pistol required a strict diet of FMJs. Hitting anywhere on a silhouette at 25 yards was pure luck. So I traded it to a dealer for a brand new Ruger Blackhawk in .357 Magnum. South Texas hog and javelina mommas still tell their babies bedtime stories about that wheel gun, just to keep them in line.

Such was my experience with the original Colt Government .380ACP, Mustang and Pocket Lite lines. They carried well and were quick to deploy. Everything that happened after that was iffy, at best. I was soured on the guns. Kimber took the original Colt .380 form factor and beefed it up a bit, creating their Micro 9 series. At the top end of the model line: the Kimber Micro 9 Raptor, a companion to their 1911 Raptor model.

Kimber’s Micro 9, like the Colt Mustangs and Pocket Lites that came before it, look a lot like a mini-1911. But they aren’t. There’s no grip safety.There’s  no barrel bushing. And there are other changes visible inside the frame and trigger. Kimber’s Raptor guns — both this one and the 1911 versions — are heavily adorned with textures somewhat resembling scales. Or maybe feathers, depending on your particular version of nerd. When I say “heavily adorned”, I mean Kimber committed to the theme. There are scales all along the top of the slide, the back strap, the front strap, the rear of the slide on either side, and both Zebrawood grips are fully covered. Beyond just tying the whole pistol together and providing some aesthetic value, the textures provide a great grip. Everywhere you put your hands on the gun, the gun grabs you right back.

I got to shoot both the Kimber Micro 9 Bel Air and this gun. They’re the same gun, but world’s apart; largely because of the texturing of the gun. (Ok, and this one isn’t Bel Air Blue). On a 9mm pistol this small, you need whatever help you can get keeping the gun still in your hand in fast fire. The scales/feathers do their job well.

To recap: scales on a snake: slick. Feathers on a bird: slick. Scales/feathers on the Kimber Micro-9 Raptor: grippy as heyel y’all. The ambidextrous thumb safety should be fairly familiar to 1911 shooters. On the Raptor version, it’s fairly small, but serrated and easy to hit.

I never had any problem flipping the safety off during the draw. It was pretty stiff when I first started shooting it. After 100 ups and downs, it smoothed right out. Putting the safety back on, however, was a bit harder. I had to either dramatically shift my grip to use my firing hand thumb, or, more easily, use my support hand. Given the Raptor’s lack of a  grip safety, folks familiar with the 1911 are left in a bit of a conundrum. Hammer down, safety off? Or hammer back, safety on?

If you move the hammer back carefully, you’ll find the hammer has a slight “half cock” position where the hammer is removed from the back of the firing pin. In that position, and with the safety off, the pistol won’t fire until the hammer is then moved fully back and the trigger is pulled.

Lots of people chose to carry similar firearms in the half-cock position, ignoring the safety and just relying on cocking the hammer when they draw. 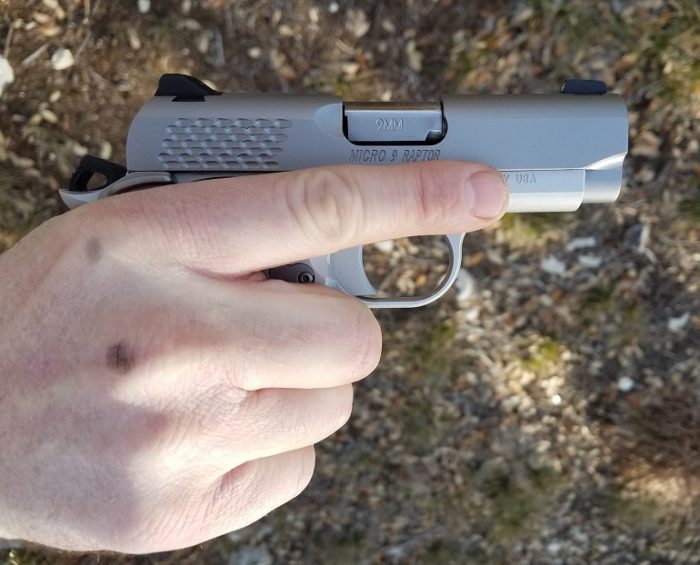 Of course, the other option is to keep the hammer all the way back, put the safety on, and rely on a good holster to keep the gun from going off until you want it to. I opt for the latter.

The trigger on the Micro 9 Raptor is one of the few things on this pistol that I’d rate as just OK. True to its published specs, this trigger measured just a tad over 7lbs in pull weight.

Although it looks much like a 1911’s go pedal, it’s not. There’s a wee bit of play up and down as the trigger pushes back, and I can feel a bit of squish at the break. It’s world’s better than most striker fired pistols, but it’s not up the same quality as the recently reviewed Kimber Camp Guard 10mm 1911. Far too many companies skimp on the sights on a small pistol. On this model, Kimber doesn’t.

The Raptor’s drift adjustable three dot night sights are tritium tube filled, with a serrated ramp rear. They pop in any light. The only disappointment: the rear sight has no ledge that would allow the shooter to rack the slide one-handed. I consider that a must-have for a self-defense focused gun.

Unlike some of the other Kimber Micro 9s, the Raptor comes with a single extended 7 round magazine. At least this T&E sample did.

Kimber’s website says the Raptor ships with a single six round magazine. Having shot the six round magazine on the Micro 9 Bell Air, I can say that the longer extended magazine is a vast improvement. It allowed for consistent 7+1 loading and gave me enough purchase on the gun to keep the muzzle down in fast fire. The extended magazine also fixed one of the problems both RF and I had with the Bell Air: it was easy to fail to fully seat the flush fitting six round mag. This magazine rams into the slightly beveled magazine well every single time. It would be a challenge to short-seat the ammunition supply, and it ejects equally well.

Given my previous experience with this general form factor from Colt, I wasn’t expecting spectacular reliability. I was mistaken.

There were no malfunctions of any kind with this pistol, using a wide variety of commercial ammunition. I shot bullets weighing from 90 to 147grains. I shot flat nosed frangible rounds, FMJs in several weights, and the whole gambit of hollow points. The Raptor never failed to load, fire or eject. I never had a magazine get stuck inserting or ejecting. I never had an issue with the safety or hammer. The Raptor ran flawlessly.

As usual, I lubed the gun prior to starting the review, and then never cleaned, lubed, or disassembled the gun during the entire firing processes. I shot 500 round through the gun in a week’s time. When it came to how the gun was intended to be used, fast draw and mag-dump fire, the Micro Raptor performed surprisingly well. All those pretty textures did their job, helping to lock the pistol into my hand.

The aluminum framed pistol is not particularly light for its diminutive size, but soaks up recoil like one would expect from a larger gun. I had no issue pouring rounds out of the Micro Raptor. It didn’t matter what round I was using, the gun stayed still in my hand and the rounds stayed on target.

The little 9 really impressed me here. After shooting the Micro 9 Bel Air — which I would only recommend as a Christmas tree ornament — I expected the Micro Raptor to be more of the same. That is to look pretty, but shoot poorly in fast fire.

Nothing could have been farther from the truth. This little gun absolutely shines in the up-close and personal department, when speed to the trigger and speed to the trigger again matters most. By the time I was done shooting the Kimber Micro 9 Raptor, I was looking at my EDC Kahr PM9 with a sour scorn. Accuracy on the almost pocket pistol sized 9mm was good, not exceptional.

The best performer was the Remington High Terminal Performance 147gr HP round, printing a consistent five round group of 3” for 4 groups at 25 yards off bags. The worst performer: the IMI 115gr Die Cut round at 5 ½”.

That’s still not bad. In general, the gun preferred the heavier grained bullets, which all printed smaller groups than the 115gr pills. No 147gr rounds scored worse than 4”, and no 115gr round scored better than 4”. Some guns are funny like that. If my old Government .380ACP had run anything like this gun I would still be carrying it today. Kimber’s heavier caliber version is a vast improvement in every single way. If you are looking for an easy to conceal, low weight high performance EDC, with controls similar to the 1911 you are used to, the Kimber Micro 9 Raptor is a great choice.

RATINGS (our of five stars)

Style and Appearance * * * *
The soft satin finish is even throughout the gun, and there are no obvious tool marks. The themed textures are a nice touch, and tie the gun together.

Customization * *
This is already a themed gun. You could change the grips and the sights, but that’s about it.

Accuracy * * * *
Get the right round and this gun performs very well. Much better than the “minute of bad guy” expectations I had for it. If this gun was an inch shorter it would have earned 5 stars.

Overall * * * *
The trigger is meh, and the groups are good, but not amazing. That’s all that’s keeping this excellent gun from the 5 star category. It’s relatively inexpensive for a pistol with so much aesthetic appeal, reliability and performance.