According to B&T’s website, “We are producing weapons, accessories and suppressors for police, military, special units, and some qualified private shooters.” Here in the U.S., most of B&T’s Swiss-made guns hover around the $2,000 mark. So whatever qualifications B&T had in mind, add the word “financially.” That’s a lot of money for a non-competition oriented pistol. But not for a reliable short-barreled pistol caliber carbine waiting to happen (thank you ATF and SB Tactical brace). Right? 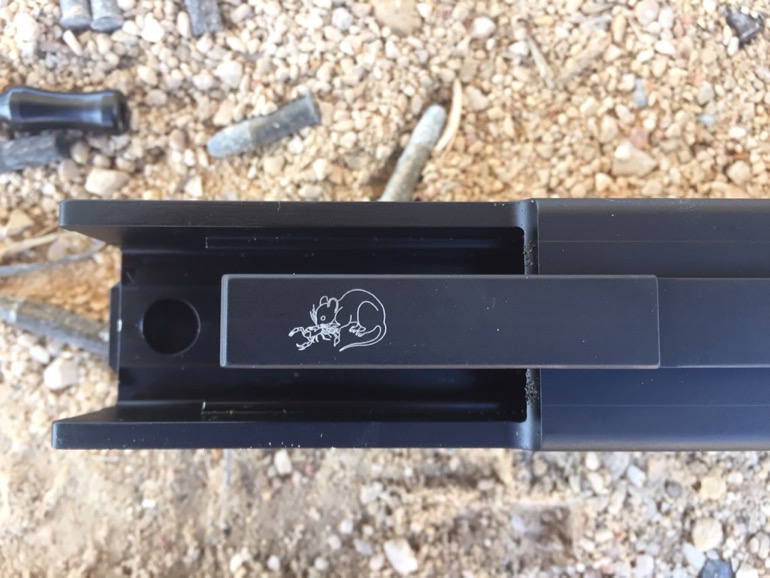 Part of the price pays for a laser engraved image of a mouse eating a scorpion hidden inside the upper receiver.

That’s because the GHM’s named after the grasshopper mouse, a rodent that’s developed a taste for scorpions. Get this: the scorpion’s venom acts like a pain killer to the four-legged GHM. Click here for a demo video.

Clearly, B&T is taking a stab at CZ’s excellent Scorpion EVO. The Swiss have a sense of humor? Who knew? Every component feels like it’s been custom fit. The finish is tough and even. There are no machine marks or evidence of casting or molding. Guys in lab coats probably assembled parts that existed since the dawn of time in a surgically sterile laboratory. Or something. The comfortable polymer grip has a convenient storage compartment inside — a feature I’d like to see on more firearms. Like all direct blowback guns, the B&T GHM’s bolt is large and heavy. The extractor is huge and powerful. 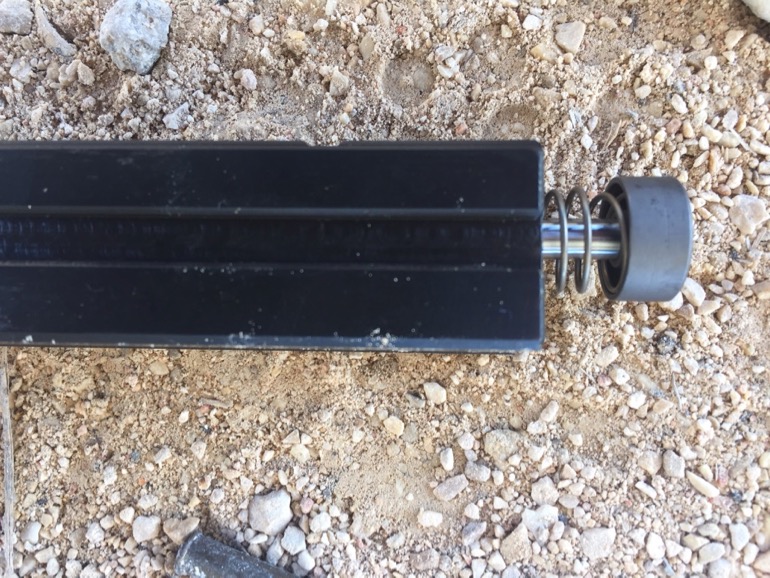 B&T’s built a recoil absorbing buffer spring into the rear of the bolt. The ambidextrous safety is perfectly positioned for AR lovers and Playskool-easy to switch on and off. The B&T GMH’s elevation adjustable front sight is of the flip up polymer variety — the only evidence that a part was molded. The rear peep sight is adjustable for windage. You can flip between a small peep for precision or a large peep for high speed and low drag. The B&T GHM’s upper receiver is one continuous piece. This design allows for a sturdy forend that free floats the barrel. While not strictly necessary on a weapon like this, the design helps with both accuracy and cooling. You can easily move the B&T GHM’s charging handle from the left or right of the bolt. Nice. All of the controls are ambidextrous. My finger indexes perfectly between the mag release and bolt release. Both are easily activated and rock solid. Silencer? You just met her! You have a lot of flexibility in that regard. The B&T GHM’s barrel features a tri-lug adapter, threaded 1/2×28. The GHM’s trigger is better than other weapons in its class. Fans of the pistol caliber not-a-carbine pistol genre know that’s a low bar, but one they’d happily jump.

The pistol’s trigger pull clocks in at about seven pounds. Take up is smooth before a welcome separation (i.e., a clean break). The reset is fairly short. It’s like a smoothed out “Mil-spec” AR trigger.

It’s not a target trigger by any means. But this isn’t a target gun.

One of the first things I noticed when picking up the B&T GHM: the go pedal looks like an AR15 trigger. The B&T rep says some AR15 triggers will work in the B&T GHM9 but might require fitting. Yeah, good luck with that. SBR’s the GMH9 is a snap. The rear of the GMH9 has a side folding stock mount, and a convenient loop for attaching a sling. The mag’s feed lips are as sharp as a ZZ Top guitar solo. The only way to avoid blood loss: load the mags by inserting rounds straight down the mag, like you would load an AR mag. Don’t ask me how I know. To disassemble the B&T GMH9, remove the three captive take down pins. The pins are as tight as [metaphor deleted], I used the knob on my Gerber Para-frame to prise them loose. When you remove the rear pin, the rear polymer bulkhead slides out of the upper receiver — and sends the dual recoil springs airborne. Unless you perform the operation with continental drift speed. You can extricate the trigger pack by removing the front takedown pin, but this isn’t needed. With the rear bulkhead removed and the spring retrieved from across the room, you can slide the bolt out of the upper receiver. Reverse the disassembly process to reassemble. 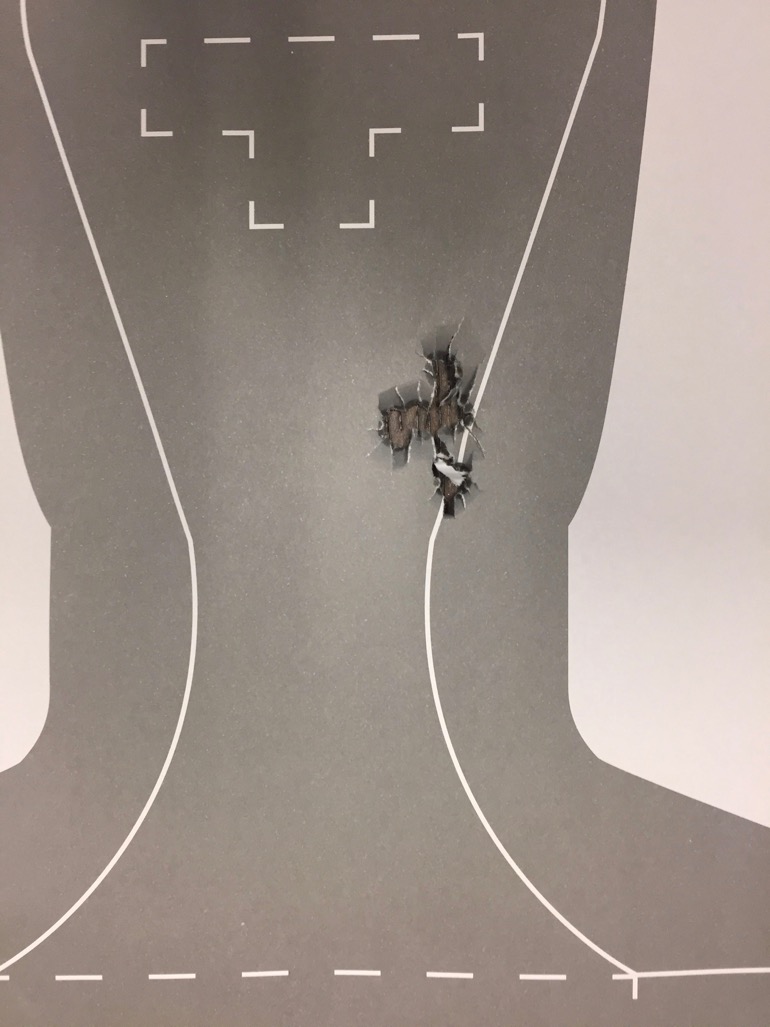 As for accuracy — without using a stock or brace — the B&T GHM9’s a stunning performer. I perforated the above target shooting Precision Delta Pro ammo at 15 yards off sandbags with a 12x Nikon scope attached. The first batch of imported GHM9s gagged on hollow points or flat nose FMJ, as seen in Jeremy’s awfully snarky video above. Once B&T realized that Americans have access to such ballistic exotica they modified the feed ramps, which are actually a separate bolt-on piece, to unlock the hollow point achievement.

As befits an upmarket upstart, B&T will replace ye olde feed ramps with the upgraded version free of charge. Magtech ammo delivered the best results, with five rounds touching. Either there is such a thing as divine intervention or the B&T GHM9 is one hell of an accurate gun. My money’s on the latter.

I ran hundreds of rounds through the GHM9 — much of it with a suppressor — and never cleaned or lubed it once. Nor did I lube it before sending rounds downrange (professional shooter, closed course). Dry, wet, dirty or sandy (yeah I went there), it just doesn’t care. The B&T GHM9 pistol is an extremely high quality firearm in a generally throwaway genre. Does it qualify for your shopping list? That depends on your budget — and your timeline. As a certain Swiss watchmaker might say, you never really own the GHM9, you just look after it for the next generation.

Style and Finish * * * *
Looks that put the MO5 to shame and like a fine wine, it has a perfect finish.

Customization * * * *
You can replace the trigger, add a stock, attach anything to the rails. The tri-lug and threaded barrel is a welcome feature.

Reliability * * * * *
The previous gen balked at hollow points. Gen2 eats anything and everything without deviation, hesitation, or reservation.

Accuracy * * * * *
A five shot one hole gun with the right ammo. Even with the cheapest steel-cased Russian ammo, bullets go where you aim them.

Overall * * * * *
You get what you pay for: looks, durability, reliability, accuracy, and ergonomics. The king of the crop.