The firearm for this Glock 43 review was provided by the Kentucky Gun Company.

The GLOCK 42 handgun was something between a huge disappointment and cruel joke on expectant gun guys and gals. A .380 single-stack? Been there, done that, bought the Colt Mustang clone (and sold it for a larger-caliber everyday concealed carry gun).

Now that Gaston’s gang has unloaded freight containers of G42s — which they wouldn’t have sold had they started with a proper 9mm single-stack pocket pistol — they’re finally ready to sell train loads of subcompact 9mm GLOCK 43s. Should diehard Glock jocks and pocket-carrying newbies hold a grudge or buy a 43? Let’s start with a simple comparison.

The Glock 42 and 43 are nearasdammit identical twins. To accommodate those larger, higher-pressure rounds, the polymer-frame G43 is slightly longer, wider and five ounces heavier than its .380 ACP predecessor. Ergonomically, it’s a distinction without a difference. Hold each gun in one hand (gangster style) and you’d be hard-pressed to tell them apart. They’re both single-stack everyday semiautomatic carry pistols perfectly designed for stealth and comfort.

Which is not to say they’re perfectly designed. Glock’s utilitarian aesthetic fails the timelessness test; it’s now about as chic as a Volvo 240D. But shrinky-dinking a standard Glock to near soap bar size certainly increases the cuteness quotient — from none to some. Still, there’s not much, visually speaking, to get exited about. Except the spare magazine! The G43 ships with both a flush-fit and an extended 6-round magazine. The flush-mount mag offers ultimate concealability. The extended mag may play peekaboo in small-pocketed pants, but it gives deep-pocketed owners (in more ways than one) welcome pinky purchase, increasing the 43’s shootability/accuracy by a measurable margin. If only they could fit one more round in the handle … nope. Six round capacity is your lot, no matter how you get a grip. A large magazine release makes quick work of removing the magazine. I suspect larger-fisted 43 buyers will go with the extended magazine or go home relatively empty-handed. Or hold the Glock 43 like the Three Stooges held a cup of tea (pinkies akimbo). Yes, there is that: The Glock 43 isn’t for our bear-pawed ballistic brethren — unless they like to practice close-up magic with a little gun. In fact, accuracy observations below are void where prohibited by manual dimensions. The Glock 43’s biggest advantage over the 42 (other than stopping power): The tiny nine is an ammunition omnivore.

There’s no getting around it: The G42 was a picky eater. While the .380 pocket pistol shoots average pressure rounds of various weights all day long, the 42 chokes on loads that fall on the high and low ends of the pressure spectrum. We forgave it this ballistic trespass with the understanding that any armed self-defender who doesn’t test his carry cartridges for reliability, doesn’t get what he deserves. Or maybe he does.

As you’d expect for a gun that’s smaller than a pack of Wet Wipes, the Glock 43 is a snappy SOB, no matter what you feed it. Is this a problem? As RF likes to point out, accuracy is a function of distance. If you’re looking for a self-defense gun that shoots minute-of-bad guy at anything from zero to seven yards, the Glock 43 is your new BFF.

With its very respectable 5.2″ sight radius, you might even want to aim before pulling the trigger. Which is not to say Jerry Miculek couldn’t use a Glock 43 to shoot the eye out of a newt at 50 paces. Once you get to grips with the 43, literally, slow-firing the gun reveals a firearm capable of 10-ring accuracy at bad breath-and-better distances. The 43’s Glock-standard U-shaped sights — love ’em or hate ’em — seem extra-large on such a small gun, and that’s no small advantage. TTAG’s JWT reckons all self-defense guns should have standard night sights and that makes a lot of sense. But again, the 43’s best deployed as a point-shooting point blank self-defense gun.

The G43’s trigger is no better or worse than any other Glock go-pedal. We’re talking about a 5.5 lbs. pull with a brick wall to bust through and a reset click that’s as hard to miss as Bruce Jenner in a bright blue dress.

That’s supposed to be a selling point (the trigger, not Bruce’s dress). If you can shoot one Glock safe action trigger you can shoot them all. The longer, harder trigger pull on snub-nosed revolvers and some small semis (e.g., Ruger LC9) is probably a better bet for newbies who lack trigger discipline (i.e. all of them). But then there’s carry.

The G43’s diminutive size, as a 9mm pistol, is its main selling point. It’s the Glock you can holster like a wallet. Not that you should. All guns need to live in a holster that covers the trigger. Here’s one we prepared earlier: A G43 seducing a SHTF Gear inside the waistband rig. When carried in an IWB holster, the Glock 43 is the very soul of discretion  Slap in the flush-bottomed magazine, rack the gun (being extra-careful not to cover the ejection port), holster-up and tuck your shirt over the gun. Unless a sharp-eyed paranoid OCD gun guy spots the clips (not magazines) you’re as stealthy as a cloaked Klingon warship. Outside-the-waistband types are equally well served. Pop the Glock in the slot, untuck your shirt and Bob’s your uncle.

Bonus! The G43 is small and light enough for pocket carry. If you’ve pocket carried a Smith & Wesson hammerless snubbie 642, the Glock 43 is an easy choice for EDC. If you haven’t, pocket-carrying the Glock 43 is well worth the price of admission. Nothing is as discreet and convenient as pocket carry.

As always, you’ve got to practice extraction. But it’s better to have a Glock 43 and not need it, than to not have a full-size double-stack gun because it was too much of a hassle to carry it. 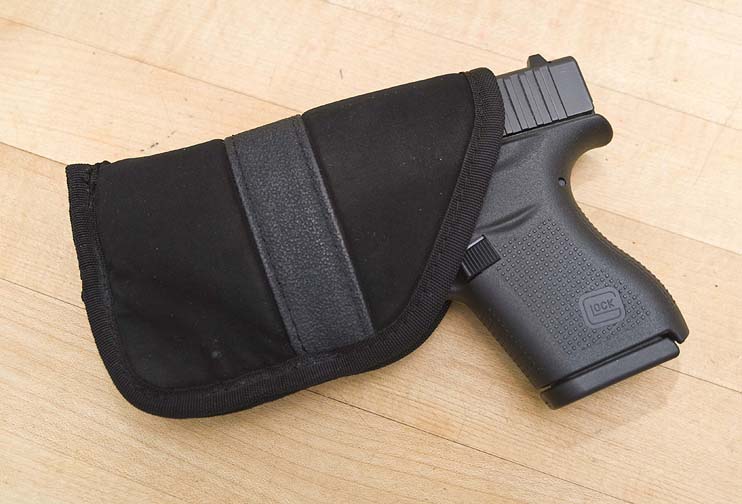 So what’s not to love? It’s not so much a matter of “Do you take this Glock to have and to hold” as the fact that there are lots of other compact single-stack 9mm fish in the sea, most with lower MSRPs. Some with laser sight options.

Think Kahr CM9, Ruger LC9, Springfield XD-S and Smith & Wesson M&P Shield (which offers greater ammo capacity). Not to mention the option of a frame-mounted safety (which the Glock 43 won’t ever possess). Or the siren song of some sexy little snub-nosed revolvers.

At the end of the proverbial day, the Glock 43’s greatest advantage is that it’s a Glock. It’s not some glamorous wish-list gun. Unlike the finicky 42, the G43 eats all ammo, delivering the “it goes bang every time” reliability that’s the brand’s hallmark. Which creates the confidence that is Glock pistol’s advertised attribute. With the added appeal of easy cleaning (clear the gun first) and a predictable (if not prize-winning) Glock trigger.

All in a pocket-friendly package. Who can argue with that? Not me. The Glock 43 is my new carry gun.

Reliability: * * * * *
Perfection, to coin a phrase. Unlike its little brother, nothing made the 43 balk.

Ergonomics (carry): * * * * *
The G43 feels natural in the hand, with a sure grip (with a built-in beaver tail design), particularly while using the pinky extension-equipped mag. Large-pawed shooters who aren’t using the G43 for a back-up gun (probably) need not apply.

Ergonomics (shooting): * * * * *
Comfortable enough to shoot at the range. You know, for fun. More than accurate enough for its intended use.

Customize This: * * *
As a new heater, mods are scarce. That said, there are more holster options sooner than there were for the 42. And given the the number of Glock fans, lights, sights, aftermarket triggers and lasers will be along soon.

Overall: * * * * *
There are less expensive options and a magazine capacity of six rounds isn’t a lot. But the G43 is just the thing for shooters looking for a small, reliable, comfortable, acceptably-powerful everyday carry gun.