Over the last year, I’ve been helping law enforcement agencies with Tactical Combat Casualty Care instruction, patrols, fugitive recovery and warrant service. One of the departments I work with insists I carry a .45ACP full-size GLOCK 21. So my new duty weapon is the GLOCK 21SF . . . A couple of years ago I shot a GLOCK 20 for the first time.  I found that large framed GLOCKs fit my hand far more securely and comfortably than my first choice for GLOCK-flavored concealed carry (the G19). When it comes to getting a grip on the gun, the G21SF (for Short Framed) is darn near perfect.

I know people complain about the GLOCK “bar of soap” feel. I’m not getting that here. And I like the finger grooves. (GASP!)

In fact, I have no desire to change the pistol’s grip in any way. I don’t need some new texture. I don’t need to get rid of finger grooves. I don’t need to undercut. Either single-handed or two-handed, this GLOCK 21SF is right at home in my size large hands. Mind you, the G21SF doesn’t seem to work for people with smaller hands. At all. I asked a few different people to shoot the G21S. Every women (and one man of smaller stature) complained that the G21SF’s grip felt too big in their hands, with a resulting loss of . . . wait for it . . . confidence. Prior to the Gen 5, stock GLOCK sights were ripe for replacement. And for good reason. They’re small and work best in bright light — when you have a minute to find them. They’re also straight up plastic, highly vulnerable to marring and deforming.

If your goal is a body mass mag dump at 15 yards, the G21SF’s U-shaped sights work just fine. If precision or low-light shooting is the order of the day, consider one of the many replacements available on the market.

The GLOCK 21SF’s trigger is even more notorious. Luckily, I’m not serving and protecting in New York City, where The Boys In Blue must attempt to cope with a 12-lbs. trigger pull. The stock G21SF pull registers right at the advertised 5 1/2lbs, with a lot of stack and a good amount of squish near the break. During reloads, I missed the G21s minimal slide lock/release over and over again. It’s difficult to use even when not under stress. For the G21SF, releasing the slide by pulling back on the slide and letting it go is the only practical solution.

Unlike my G19s, I couldn’t “limp-wrist” the G21SF to jam. Holding the gun in my right hand fairly loosely and firing it across my body sideways, the gun cycled every time. I did the same drill on my back, which almost always causes my G19s to short cycle. Not with the G21SF. If I was holding the gun in a remotely safe manner, it cycled just fine. I had a little trouble with this gun’s reliability. But only with two new GLOCK-brand GLOCK magazines, and only for the first few strings of fire. After that, the gun ran like a champ.  Those same two magazines had trouble in another gun, but the one magazine supplied with the pistol had no issues at all.

After the first few magazines, I had no issues to load, fire, or eject. The magazine never failed to seat and it never failed to drop. I put 500 rounds through the GLOCK 21SF for this review. I have at least twice that through the gun now. Running completely stock, the G21SF performed flawlessly, fed a wide variety of ammunition brands, types and weights. 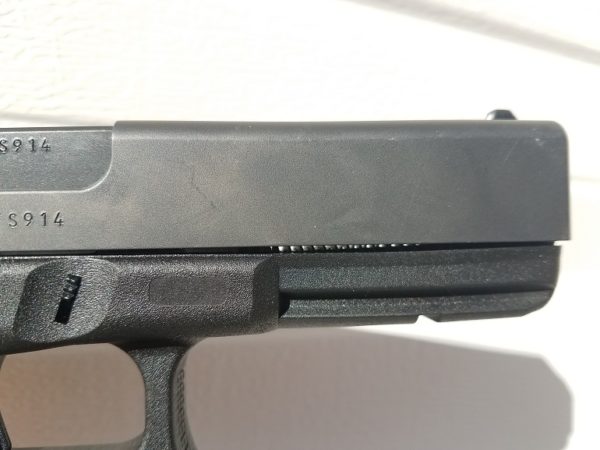 This brand new gun rattles a bit, though not as bad as an old Colt 1911 or a new Ruger SR1911. There’s also a good amount of space between the slide and the frame. As far as function, that doesn’t concern me much. But it’s a great place for dirt, snow and mud to find its way into the recoil spring and the action.

For a fairly lightweight .45, the G21 doesn’t have a problem with recoil. The recoil impulse is fairly mild and easily controllable. The slide goes back and forth on the rails with minimal muzzle flip. Keeping the muzzle down in fast fire for controlled pairs or the Mozambique Drill wasn’t a problem. Great but . . . The G21SF let me down in the accuracy department.

Is that ok? Sure, but it’s nothing to brag about. The mediocre accuracy in controlled, braced slow fire partially explains my lack of accuracy in fast fire.

I ran the Bill Wilson 5X5 test over and over with this gun, never scoring anything better than Sharpshooter. My average time was 31 seconds. I can score 10 full seconds faster with my Beretta 92FS, sometimes even better. I score in the mid 20s with my stock Colt Government 1911.

That poor score isn’t because I shoot too slow with the G21SF. It’s because I shoot too fast to remain accurate. I really struggled to stop this gun and keep it stopped when it came time to pull the trigger. I ended up with a lot of rounds just outside the target circle.

It’s not the grip angle. Yes, when I draw and present the gun, that was a big change I had to get used to. But I’ve been shooting GLOCKs heavily for a little over a year now. I do my daily dry-fire with a G19 and I put at about 350 rounds a week at the range through some GLOCK. I’m starting to get it.

The challenge: odd grip angle and more of a less-than-ideal trigger pull, combined with a fairly light weight front end. The combination makes it too easy to move the gun in fast fire. Here’s a pic (above) of my best full magazine: 13 rounds in 13 seconds standing at 25 yards. Note this is my best attempt. You can see that the gun isn’t over any of the bullet holes and that they are well spread out in the target circle. Several are outside of it entirely. One round a second isn’t necessarily slow fire, but it’s not burning up the clock either.

Combine my difficulty keeping the gun still through the trigger pull with the mediocre basic precision of the gun, and I end up with a gun I’m not ready to count on in combat. Yet. But I’ll get there. The GLOCK 21SF is the duty pistol more or less forced upon me. I could do a lot worse. I have a lot of work to do before I’m really comfortable with the gun, but the basics are there for a reliable duty pistol, or a suitable gun for personal defense.

Style and Appearance * * *
The finish on the G21SF’s slide is even throughout, with no obvious tool marks or unevenness. It largely resembles a diving board from the top. The frame is a just blackish plastic in multiple geometric shapes. It works, but it’s not pretty.

Customization * * *
No changing the back straps on this one and there isn’t nearly the aftermarket support for it enjoyed by owners of the G17, 19 and 34.

Reliability * * * * 9/10ths
There were some magazine related issues at first, but cleared up quickly. The gun ran flawlessly after the quick break in.

Accuracy * * *
3″ groups were the norm. On a pistol this size, that’s exactly average.

Overall * * *
The GLOCK 21SF is a relatively inexpensive and reliable pistol with reasonable accuracy (when coupled with consistent training.) It’s also a known quantity, simple and easy to use. It defines the phrase “good enough for government work.”