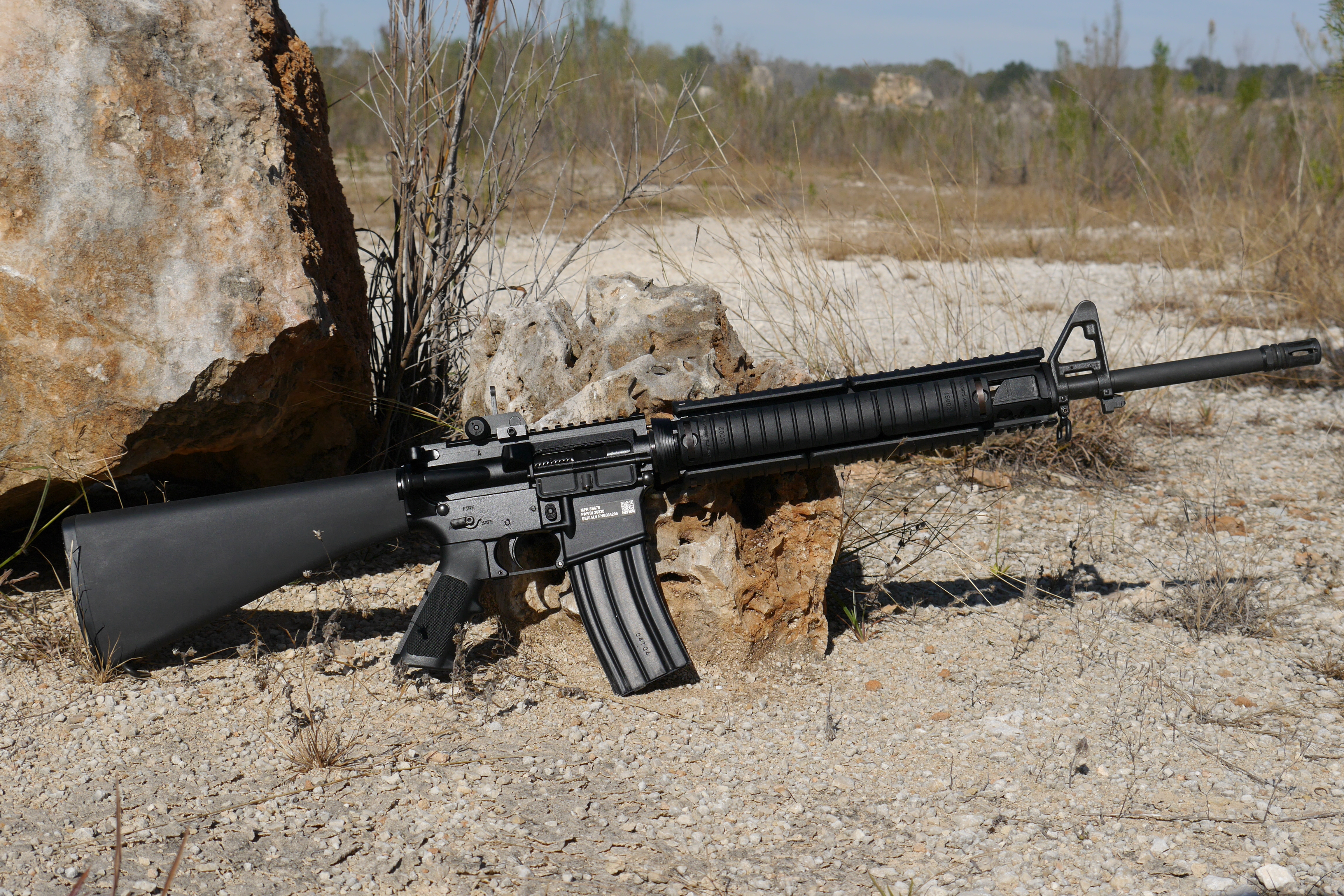 The AR-15 platform is one of the most versatile and easily customized firearm designs ever created. From tiny pistols to massive beer can launchers, they can be configured to do just about anything. That said, there’s a significant portion of the gun owning population who are trying to get their guns to look exactly alike — mimicking the M16 platform used by the U.S. military. Now, thanks to FN America, there’s nothing to mimic. They can have the real deal.

FN manufactures the M16 rifle for the U.S. military, and has since 1988. I have personally walked through their manufacturing facility in South Carolina, watched the components pouring off the assembly line, and been present at the baptism of a few of these cordite fueled machines. You can see some pictures of my tour through their facility here. It’s pretty cool.

While FN has been manufacturing firearms for the military for decades, the concept of producing firearms for the civilian market is still relatively new. their SCAR platform has been available for some time along with the P90S and Five-seveN handgun, but only in the last couple years have they expanded their offering with the FNS-9 handgun and ever-expanding line of AR-15 platform rifles.

When their first FN 15 rolled off the assembly line, my very first question was “why don’t you just make a semi-auto version of the M16?” At the time FN said they wanted a clear line of delineation between “military” and “civilian” firearms. From the look of this FN 15 Military Collector M16 when it arrived at my FFL, that line hasn’t just been blurred — it has completely disappeared. This is the latest rifle in FN’s Military Collector series. I’ve reviewed the M249S which was the first firearm released in that line, and Jon reviewed the M4 variant that was also just released earlier this week. They all follow the same philosophy of giving customers a firearm that is identical in every (legally) possible way to the military version. With the M249S that meant re-designing the upper receiver and bolt assembly, but the changes were somewhat simpler with the M16. The barrel on this M16 is the exact same 20 inch button broached chrome lined barrel that is used on the M16 being issued to our troops. FN has an in-house barrel shop that they use to manufacture all of their barrels from solid blocks of metal. Barrels for guns like the SCAR are cold hammer forged for increased reliability and durability, but the military demands button broached rifling instead for a quicker and cheaper product. They could absolutely pop a better barrel on for the civilian market but that would kind of defeat the whole premise of the product.

While the M4 version has a welded flash hider on the muzzle, the M16 version has a long enough barrel that the flash hider can simply be screwed on as normal. That’s handy if you imagine you’ll want to add a silencer or other muzzle device to your rifle down the road. The front sight on the FN 15 M16 is a fixed post with integrated gas block, just as it has been for well over half a century. What’s new in the last few decades is that the clamshell polymer handguard from the XM15E1 series has been replaced by an equally easy to remove quad rail system that is held in position by the spring loaded delta ring near the receiver. That’s one of the upgrades that came with the M16A4, and the exact same Knight’s Armament M5 RAS rail system covered by the same familiar Knight’s Armament rail covers is present on the Military Collector M16.

The added rail space is definitely appreciated but buyers should be aware that this is another instance where FN’s insistence on staying true to the “as-issued” M16 platform can be a hindrance. The M5 RAS here attaches directly to the barrel, so any added weight or pressure on the rails translates directly into movement of the barrel. That can cause some inaccuracy out on the range. Moving back to the receiver set, the receiver here is pretty much identical to the M16 issued to the military. There’s a UID sticker on the side of the receiver for inventory control, and the ambidextrous safety is the same feeling as that issued on the current M16. The trigger is (as expected for a “milspec” offering) fairly terrible with a heavy pull. And the rear sight is the same range-adjusting iron sight as you’ll find on the military version.

The difference is on the inside. The receivers look similar on the outside, but on the inside they sport a “high shelf” design which doesn’t allow fully automatic fire control components to be inserted. The safety selector only clicks two positions, not three. And the UID on the inventory control sticker is a link to FN’s website instead of having the manufacturer data (present on the military version). Out on the range, the rifle feels… just like any other AR-15. There really isn’t any difference from a similarly sized Daniel Defense or SIG SAUER offering when it comes to maneuverability and felt recoil. The 20 inch barrel makes for a nice soft recoiling firearm, and the A4 stock is nice and solid.

For accuracy testing, I slapped a SIG SAUER Tango6 4-24x scope on top and loaded up a variety of flavors of ammunition to test out. After a quick zero I shot a series of five round groups with each load, noting that at no time during my testing did I have a single malfunction of any kind. This was the best target of the day, accomplished with some help from Eagle Eye Ammunition. That looks like about a 1/2 MoA four round group with a flier pushing it to a hair over a full 1 MoA. I can say with confidence that the flier to the right was 100% a function of the crappy trigger and my inability to manage it properly — the gun is capable of 1/2 MoA all day long with a better trigger and the right ammo.

The loser of the day was definitely IMI’s 77 grain OTM loads. The 1:7 twist rifling on the barrel should have been good enough to stabilize the load, but for some reason the five round group ended up about almost exactly 2 MoA. There’s no doubt that this is something people have wanted. Heck, our own Jon Wayne Taylor, who had carried his own M4 for years in the sandbox, was impressed with the the M4 version FN 15. Former military members will appreciate the authenticity and familiarity, and collectors will appreciate having a piece of kit that came from the same manufacturer and functions just like the original item. Not only does it look good and have a great pedigree, this rifle actually performs well — it definitely exceeds my 1 MoA for $1k requirement.

I’m very happy that FN has finally started producing these for civilian consumption. In a market where every manufacturer big and small is producing an AR-15 variant you need a way to differentiate yourself from the rest of the pack. FN’s FN 15 Military Collector M16 has that in spades with the ties to the military M16, and the fact that it performs better than many similarly priced commercial rifles is the icing on the top. I think it’s a great product, definitely worth the $1,749 MSRP.

Style and Authenticity * * * * *
FN took some creative license with the M249S, throwing together parts from different versions to make something that looked good. Here they stayed true to their M16 design and it really shows.

Customization * * * *
There’s tons of rail space, and the gun is compatible with all the usual AR-15 parts. But why would you alter it? That defeats the purpose.

Reliability * * * * *
It fired everything without issue. No problems loading, firing, or ejecting any round put through.

Overall * * * *
There’s no doubt that it’s worth the money if you’re looking for the most accurate recreation of a military M16 you can own as a civilian. If you’re looking at it purely from a functionality perspective there are some things I would like to change, like having a free floating handguard and better trigger. But even with those issues it’s a solid shooter.