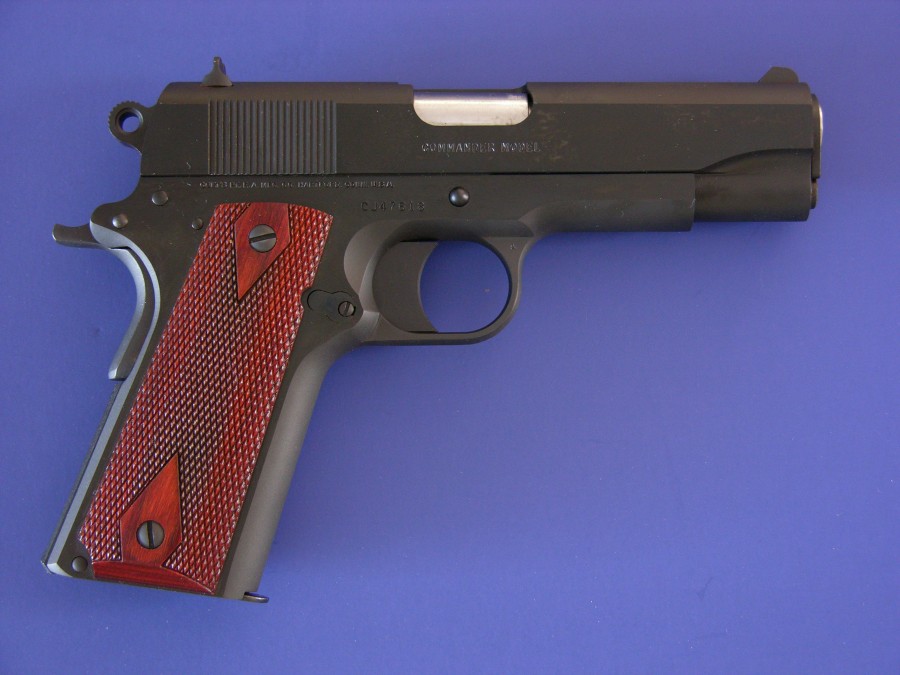 Why do governments always have to screw things up? Take the US Army’s attitude towards our service pistol used successfully through two world wars, for example. After WWII, some desk-pogue decided that the 1911 in .45 ACP had to go; it wasn’t “continental” enough, I guess. The first time the US Army tried to get rid of the 1911 Government model in .45 ACP was in 1949. Back then, US Government requirements were issued stating that the new pistol had to be chambered in 9mm parabellum (Latin is even neater than French) and couldn’t exceed seven inches in length or weigh more than 25 ounces. Colt’s entry — a shortened 1911 with an aluminum frame (called Coltalloy) wasn’t adopted (neither was the Smith and Wesson M39). So in 1950, Colt started producing their version for the retail market, calling it the Commander. Colt wisely brought it out in .45 ACP as well as 9mm and also in the red-headed stepchild, .38 Super. In 1970, Colt began making the Commander with a steel frame, calling it the “Colt Combat Commander” and it’s still produced today. . .

Perhaps it’s like superposition, existing only in the mind of the observer, but some people (like me) believe that to be a real 1911 (small, medium, or large) it must say COLT’S on it. Today’s version is built on the Series 80 platform, utilizing a firing pin block that (in theory, at least) prevents an accidental discharge if the pistol is dropped on its muzzle from a height of six feet onto a concrete surface. Lord knows we need that. The safety makes it harder to get a really nice, safe 3.5- to 4-pound trigger pull, at least according to most gunsmiths who specialize in such things. And most of us don’t drop our pistols. My sample did not say “Combat” on the slide; just Commander, but the workmanship was first rate. Metal-to-metal fittings were tight and smooth working. Machine marks were noticeably absent. Blue finishes were as you would expect from Colt: Deep and excellent. The pistol had the “Standard” grip safety (according to Colt), but some Geezers like me refer to it as a Rat-Tail grip safety. It’s thin but covers the round, trademark Commander hammer nicely to prevent “bite.” The thumb safety is the standard job; the one everybody wants to replace right away. Maybe that’s the idea. 1911s are the most customized pistols ever made. The thumb and grip safeties are usually the first things that go. The trigger is the long, solid aluminum model (in black); which I dislike. I much prefer the short, white aluminum jobs, whether adjustable or not. The Commander also features an undercut trigger guard. That, in combination with the upswept beavertail safety and Colt G10 grips, contribute to overall improved ergonomics. The all-steel frame and slide upped the weight to 33 ounces, making the Colt less pleasant to carry, but nicer to shoot. The now de rigueur three-dot sights were easy to see and perfectly regulated for 230-grain loads right out of the box. The ejection port is slightly lowered, but not flared. The Dual Spring Recoil System reduces felt recoil while extending recoil spring life. The recoil spring assembly is the tried-and-true (so-called) GI system. This is the one John M. Browning invented and nobody has improved upon; instead they are now making take-down and reassembly more difficult with the “sounds good” — but less reliable — full-length guide rod. I put about 300 rounds of ammo of various description through the Commander, using bullets weighing from 200 to 230 grains; from +P hollow points to standard pressure full metal jacketed. The Colt Commander ate them all without a burp or hiccup. Feeding and ejection were 100 percent and then some. No empties hit me in the head, landed on my hat, or tried to burn out my eyes; something I really appreciate in any 1911 design. The Commander version just “hangs” better than the Government model; to me, at least. Most disagree (the story of my life). At any rate, it was really easy to place shots in the proper locations, even when trying to do so fast. It’s little wonder the Marines have come full circle from the Beretta Wonder-nine. Their newest CQC pistol is a full-size COLT 1911 in .45 ACP; and it’s just hard to argue with that kind of endorsement. THE GOOD: Easy to shoot and completely reliable. Good for self defense, some carry gun scenarios and at the range. Great-looking handgun, too.

THE BAD: Two things detracted from the Commander being all it could be. The first was the thumb safety. It was very (that’s very) hard to engage (two thumbs helped), and even harder to disengage. The other is the price. Even if it is a genuine Colt, the price is too high. FOUR STARS; and that’s just being mean.

THE UGLY: Nothing comes to mind. Despite the tight thumb safety, I can recommend the new Colt Combat Commander without reservation. After all, it said “COLT” right on it.

From Colt: The Colt Competition Pistol, Lightweight Commander, SAA, and Others…