Earlier this year Wilson Combat announced they were putting their gunmaking know-how up against about a million garage GLOCKsmiths. Enter the “Wilson Combat GLOCK Custom Pistol Enhancements.” RF and I are fans of, and owners of, a few different Wilson Combat pistols. I’ve found their 1911s to be consistently high quality and great shooting guns. RF carries their new EDC X9. So TTAG reached out to Wilson Combat, GLOCK 19 in hand, and asked them to have a go. Although the GLOCK upgrades aren’t named after him, Wilson leaned heavily on their shooter, instructor and regular contributor Larry Vickers. The retired Master Sergeant and former member of the Special Forces Operational Detachment-Delta has been a driving force behind pistol shooting and pistol smithing for decades. 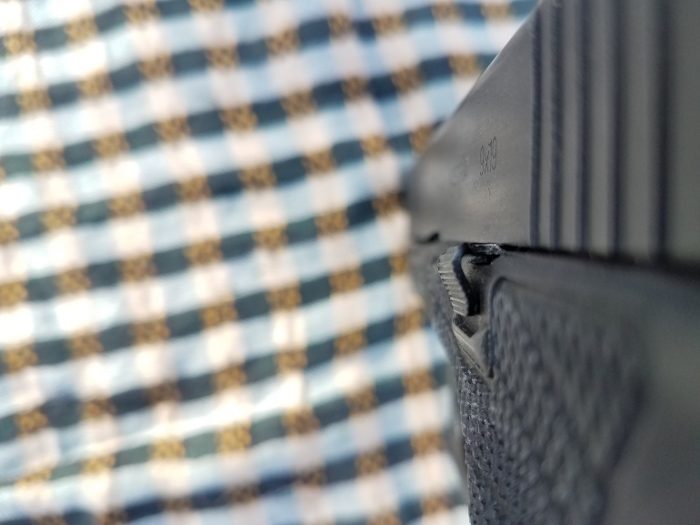 I have the Vickers slide stop on one of my G19s. I can now use the slide stop as a slide release, dramatically decreasing my reload times. (Getting the pills back in the dispenser is particularly important on the plastic fantastic; GLOCKs don’t make as good of a club as my S&W 29.) The WIlson Combat-installed Snag Free Front Sight and Elite Battlesights are a massive improvement over the original GLOCK “sights”. The new tritium sights stand out well against targets both dark and light, providing a small view of the target on either side. Beyond the obvious custom front serrations, the barrel swap is one of the most obvious changes. The Wilsonized GLOCK barrel is flush cut and reverse crowned.  It gives the nose of the pistol a neat, blunt appearance while removing a pain point for Inside-the-Waistband carriers (like me). That goes double for all of you appendix carry devotees. The WC GLOCK’s barrel is all flutes, all the time. The barrel and the chamber have both been fluted. The latter classes up the whole pistol.

Wilson’s smiths serrated the top of the GLOCK’s slide longitudinally. The chamber flutes flow between the small lines of the top slide cuts, adding some texture to the gun’s otherwise blocky appearance. I doubt they add much (if anything) in terms of performance, but the mod really sets the GLOCK apart. You don’t need no stinking badges? Then you don’t want this particular gun. Wilson’s mark is on the right and left of the slide, the top of the frame in front of the rear sight, and on the chamber itself.

Of course, you don’t have to Wilson badge your Wilson Combat GLOCK. You could save yourself some dough by not doing so. But come on: if you’re shelling out the cash for a Wilson Combat Glock, you want the plebes to know it.

The frame itself has relatively few upgrades — all of them valuable.

Most obvious: the Wilson Combat Starburst stipple pattern. It extends forward of the frame and the stock texture covers both the front and the back straps of the grip. It’s an attractive, deep stipple pattern that says “Wilson Combat” to those in the know.

It also gives the shooter one heck of a grip.

This pattern doesn’t quite cut up my hands, but it’s akin to holding sticky sandpaper. Right answer, at least for me. I spend a lot of time shooting with gloves on in the western states winter and sending rounds down range with my hands soaked in Texas summer sweat. For this gun, Wilson left the finger grooves intact. The combination of finger grooves, heavy texturing and the undercut on the trigger guard creates the grippiest G19 I’ve ever held. I can grab the WCG quickly — without catching anywhere in my draw and press to fire single-handed with complete . . . wait for it  . . . confidence.

Of course, the Wilson GLOCK is still just cut-up and molded plastic. There’s no wood here, or G10, or anything with pretty figures, laminates or shine. It’s still a GLOCK. Without the lamented GLOCK trigger. The kit replaces the entire stock firing assembly. The user can take the trigger pull weight down to three pounds. Our T&E sample breaks at 4.5 pounds. It is without a doubt far smoother than the stock GLOCK unit, with less grit and uptake and a shorter reset.

I plan on taking it as low as it can go, and count on good trigger discipline and an outstanding KMFJ holster to keep the trigger in place until I’m ready to “release the round.” The Wilson-modded GLOCK frame includes the Vickers Grip Plug/Takedown Tool. The fact that either this tool — or the factory GLOCK tool — exists at all surprises me. I’m one of the few people I know who bothers to clean his GLOCK pistols. But if you need/want to detail strip your GLOCK in the field, this puts the key in the palm of your hand. More importantly, the grip plug works as a good backstop and angle point for a fast and less than perfect magazine insertion.  I’m all for unobtrusive ways to get the gun going faster, especially when I’m stressed and stupid. This is a effective, inexpensive improvement.

This pattern has become pretty standard in the Cerakote world; it gives the new gun some old soldier gravitas. As far as the finish type itself, I have two other pistols with Wilson’s Armor Tuff coating. It’s been durable over time, with minimal (if any) wear shown from carrying the pistols (albeit in leather holsters). The breathed-upon GLOCK 19 is measurably more accurate than my stock G19.

To be clear, I wasn’t able to shoot this particular G19 before Wilson Combat got its hands on it. So maybe, just maybe, this gun was a particularly sweet shooter prior to being Wilsonized.

I can, however, compare it directly to other G19s that I have, at least one of which is bone stock. I can also compare it to the accuracy of several other GLOCKs I rock.

In terms of accuracy, this one bests them all.

The best scorer: Wilson Combat 124gr+P HP. It shot a consistent average of 1.5″ five round groups at 25 yards off bags. The worst scoring round: the Remington 115gr JHP at 2.6″ — more in line with what I usually see with my stock G19. 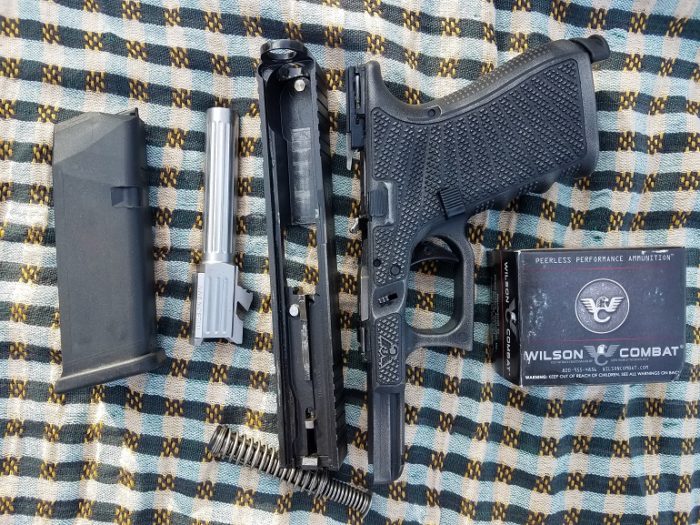 In slow fire off the bench, the modded GLOCK’s barrel, trigger and sights likely made the difference. In fast fire, I saw an improvement, but a much smaller one.

My core challenge with the G19 remains the same, regardless of whether it’s factory stock, my no-GLOCK-parts GLOCK, or the Wilson version: I drive the muzzle down too much. I shoot low, and pull the trigger before the gun comes to a full stop, especially when transitioning targets.

That’s the Indian, not the arrow.

The customizations come without any apparent tradeoffs in reliability. I’ve put at least 2,000 rounds through this gun without a single hiccup or issue of any kind, using ammunition from multiple manufacturers, in all common weights as well as several projectile types, feeding it from GLOCK and Magpul mags.

Wilson’s heavily modified GLOCK lived up to the stock gun’s reliable reputation — which is more than I can say for some of my factory GLOCKs. OK, so what’s all that cost? Here’s the bill of sale (not including the GLOCK 19):

All that for a total of $1,646. Of course, this particular pistol came equipped with just about everything Wilson Combat can do for GLOCK customization. Take out the bling and the price comes down to about a third of that amount.

I own a few GLOCK pistols, including a GLOCK 19 I made without a single GLOCK part. I like this version more than those. It shoots smaller groups, reloads faster and stays in my hand better than any other GLOCK I own. And it says Wilson Combat on it.

Overall * * * * *
If this were a pure gun review, I’d give it four stars. The group size doesn’t make the grade. But judging the customization in of itself, it’s five stars all the way. The tied-in textures and attention to detail are a huge class upgrade, and the new guts increase the gun’s performance.  If the Glock 19 is a Toyota Camry, the Wilson Combat version is a Lexus GS.