Emerging from bankruptcy restructuring, Colt announced lower pricing on many of its products and has released a few new ones. On the handgun front, The Colt Competition Pistol and Lightweight Commander just made it to market, and we had the chance to put a few rounds through them at SHOT Show Range Day plus snap a few pics of Colt pistols both new and established . . . It looked like the USMC Special Forces’ new pistol, Colt’s Close Quarters Battle Pistol M45A1, was popular on Range Day. I was never a fan of the tan color scheme until I saw it with a shooting-induced, scorched muzzle. Onto the new stuff, for 2016 Colt is introducing a competition-grade, buy-it-on-the-way-to-a-match 1911 called, appropriately enough, The Colt Competition Pistol. It features a dual spring recoil system in both .45 ACP and 9mm, an undercut trigger guard and upswept beavertail, and a National Match barrel. The rear sight is a Novak’s unit, and the front is a blue fiber optic. I shot it in 9mm and found it very easy and pleasurable to shoot. With the dual recoil spring — and you can actually feel the progressive nature of the springs while shooting — and 9×19 chambering it’s a total pussycat on recoil. Accurate, too. However, if they’re going to call it a competition pistol I can’t help but feel they should raise the $899 MSRP — which is low for a Colt 1911 — and add a few more features like a flared magazine well, a target-style rear sight, larger controls, maybe more slide serrations, etc. 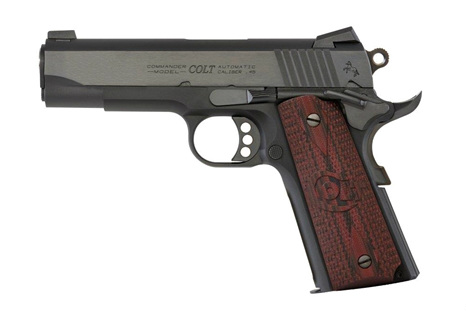 Also new for 2016 and also available in either .45 ACP or 9×19 is the Lightweight Commander. For $949 MSRP you receive a commander-sized, aluminum-framed 1911 with the aforementioned Dual Spring Recoil System and Colt G10 grips. If I may go off on a tangent briefly, it bothers me that the previous pistol is officially “The Colt Competition Pistol” but this one is the “Lightweight Commander.” Why isn’t it “The Colt Lightweight Commander?” With a press release just chock-freakin-full of ™ and ®, the branding inconsistency hurts my OCD. It’s the small things that keep you out of Chapter 11. Not helping me stay out of Chapter 11 myself are good looking, classic guns like Colt’s Single Action Army with color case hardened finish. I believe the following is a custom shop creation.