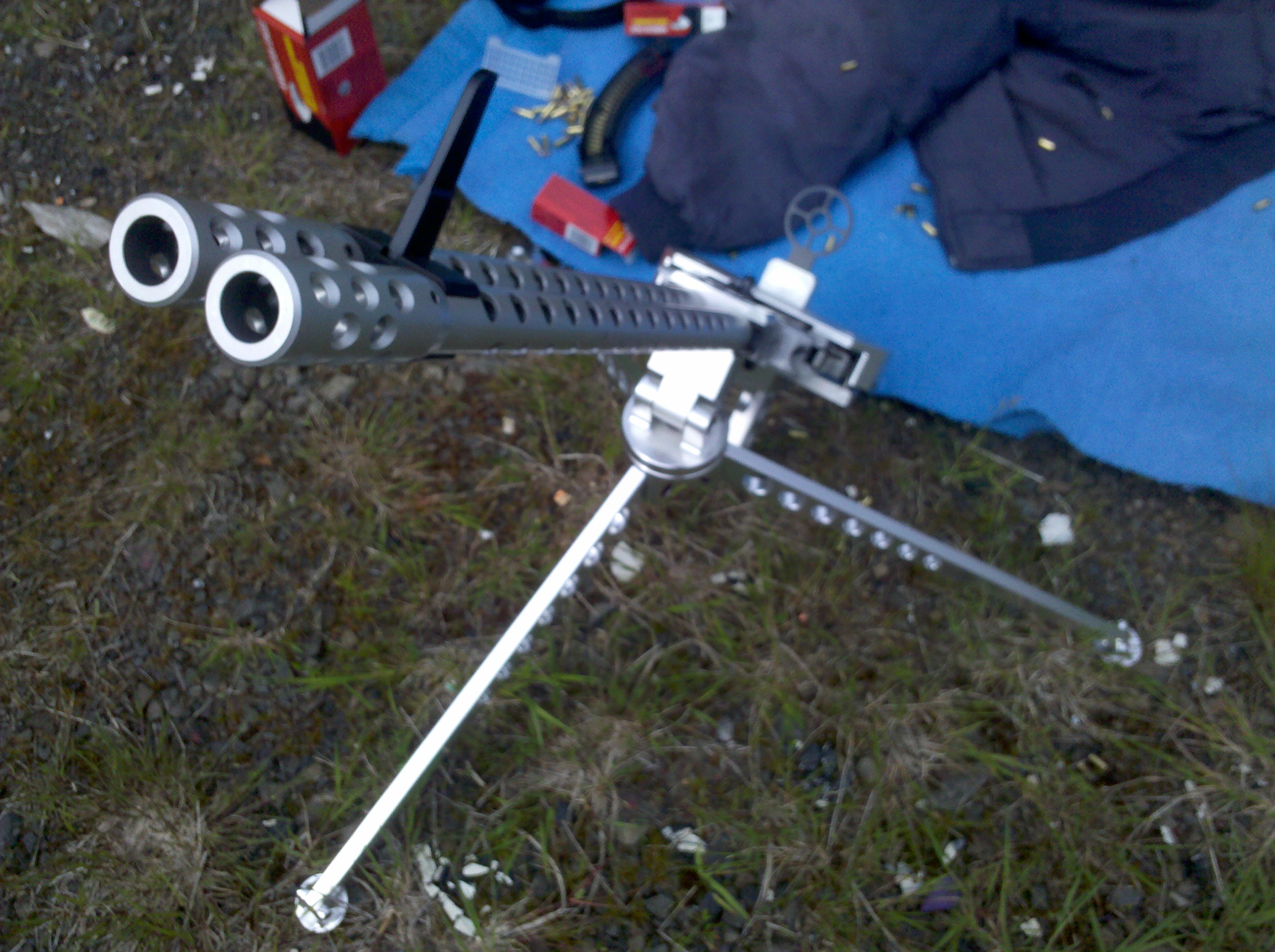 I like to shoot. A lot. Sometimes I like to shoot very quickly, but full-auto? Meh. I live in a state which prohibits machine guns, and I don’t have literally tens of thousands of dollars to blow on one anyway. For me as for most shooters, Class III full-auto is not and never will be a reality . . .

I’m not exactly alone in this situation. Onerous federal and state laws, Byzantine licensing procedures, and the insanely high price of a transferable machine gun place this dream well out of reach for 99.995% of us. Even if a selective-fire MP5K were only a credit card swipe and an NICS background check, how many of us could afford enough ammo to justify the expense? Not me.

Don’t get me wrong: I’m not exactly hung up on this, and I don’t sit awake at nights fuming that the National Firearms Act took away my ability to throw lead downrange even faster than I can right now.

But it sure looks like it would be fun to do every now and then, and as any bump-firing YouTube superstar will tell you, fully legal bullet-spraying ballistic bliss can be yours for a few seconds at a time even without an NFA stamp. As long as you don’t really care what, if anything, you hit.

Our family spent the weekend at the Washington coast, and out of the blue I met a very generous fellow with a taste for manually-cranked rapid fire. Instead of flying a kite or digging for razor clams, here’s where I found myself this Saturday.  Oh yeah. My new friend is the bemused proprietor of a Cabelas Double 10/.22 ‘Gatling Gun.’ As you can tell already, it’s not a true Gatling Gun; it’s two Ruger 10/.22 barreled actions strapped side-by-side in a machined aluminum fixture with ventilated barrel shrouds, twin crank-operated trigger cams and quadrant sights. It’s all pintle-mounted on a miniature tripod, and it looks like the most badass double barrel paintball gun you’ve ever seen.

In action, the triggers of the two Rugers are pulled by the alternating lobes of a crank you turn with your right hand. A left-hand pistol grip features a trigger-like lever that pulls the cam into contact with the triggers for firing. In practice the ‘trigger’ took a lot of effort to hold back, so we eventually jerry-rigged it with a zip-tie.

The 10/.22 magazines (we had some steel-lipped 25’ers, but the bigger the better) stick out the left and right sides of the fixture., and while they look very sci-fi they don’t insert easily or seat firmly. The left barrel ejects downward, and this is a good thing for operator safety but it’s a bitch to cycle the bolt for loading and unloading. The right barrel ejects upward; it’s easy to charge but throws the sizzling-hot .22 brass *directly* into your face as you sit or lay down behind the tripod. This shows the cute little .22 tattoo you get when you shift your elbow onto a just-fired shell. It looks worse now, but it should fade in a few days.

Here’s a dilemma: a prone shooting position allows for slightly better ‘aimed’ fire, but subjects to to a painful shower of extremely hot brass. A seated firing position protects you somewhat from brass burns, but requires you to walk your rounds onto the target with an even greater sense of randomness. Some sort of shell deflector would have been a great idea, and the next time we take it out we’re going to bring a patio bug screen to sit behind.

Whether deliberately aimed or simply sprayed towards the target, this whole setup is wickedly (and blissfully) inaccurate. The quadrant sights seem better suited for leading imaginary ME-109s from the tailgun of your imaginary Flying Fortress than actually hitting a real target. The words “suppressive” and “rimfire” are seldom uttered in tandem, but that’s pretty much what you get here.

The cranking action causes a lot of wandering at the muzzle, and the tripod is sturdy but it doesn’t dampen or stabilize the gun’s traverse. Single aimed shots are all but impossible because the crank mechanism gives no tactile hint of when the next shot is about to fire. It was a challenge to hit within five feet of our target, a spoiled bottle of Ranch dressing, with the first few shots.

When an ordinary gun won’t hit large, nearby targets with a first or second (or fifth) shot, this usually ruins your whole shooting experience and brands that gun as a worthless POS forever. With the dual Ruger rig, however (in the immortal words of Al Pacino) you’re just gettin’ started!

If your first shots don’t land on or near the target, just slew the muzzles around and keep cranking while you walk your shots home. The standard full-auto technique of short, controlled bursts doesn’t apply here, since you’ll lose your combat zero if you stop cranking and you’ll have to walk your shots in all over again.

At a moderate cranking speed, the twin 25-round magazines are good for about six seconds of sustained fire. This works out to a cyclic rate of fire of about 500 rounds a minute. The effective sustained firing rate is less than 100 rounds a minute, because the unsupported magazine wells make mag swaps slow and balky. If you’ve got some reliable 50-round magazines, good on you: you’ll get twelve seconds of fun and an effective sustained firing rate of maybe 150 or 200 rpm.

Talk of all these bullets flying around brings me to an important consideration: this dual Ruger rig is a rangemaster’s nightmare. With aimed fire essentially impossible, you’ll need a very deep and broad field of fire (or very high backstops all around you) before you even think about loading the magazines and turning the crank.  And that ain’t all:

So let’s take stock of things so far: this rig is hard to load, painful to shoot, dangerous, expensive, and you can’t hit shit with it without spraying a whole box of shells downrange. In a word (or two), it’s effing brilliant.

It may be a one-trick pony, but this little pony gives you a hell of a fun ride. A whole day later, I still get an ear-to-ear grin every time I think about the utter joyous folly of spraying box after box of .22s from those twin vented barrels.

You can’t hunt with it, you can barely hit a trash can at 15 yards without missing a dozen times first, and you can’t defend yourself with it except from the fattest, slowest-moving, thinnest-skinned and most poorly armed attackers imaginable. With enough pre-loaded 25-round magazines, you could possibly use it to hold off a wave of crazed giant possums shuffling towards you with hate in their beady little eyes, but then again maybe you couldn’t.

There is absolutely no practical reason for this gun to exist other than pure stupid fun, but for that single purpose it’s absolute magic and I feel incredibly lucky to have spent a few hours shooting it like I stole it. We put about 500 rounds through it in an hour or so of intermittent bullet-spraying, and I can honestly say I’ve never had so much fun with fifteen bucks worth of ammo.

But after the novelty of spasm-firing like Aliens’ Vasquez and Drake wears off, this rig would probably sit in the gun safe a long time between outings.  I’m sure it wouldn’t be worth my money to own one of these, but the shooting world is a brighter and sillier place for their existence.

As much fun as it’s been, this review is really only a teaser for the BIG review coming up sometime this summer: a converted Browning M1919 belt-fed machine gun with a Gatling crank handle. If the dual Ruger gatling gun is playful and silly, this bad boy is deadly serious. I can’t wait to try it out, but we need to secure several hundred rounds of linked .308. Accuracy *
I had no idea I could fire so many 10/.22s so many times at such short range and miss so often.  Minute of Trash Can is the best I could get at 15 yards.

Style **
You’ll like it better if you’ve always wanted a paintball AA gun of your very own.  Paint it black for five stars of pint-sized awesomeness.

Ergonomics (zero stars)
Add one star if you have a picnic table to mount it on, and bring a zip-tie for the ‘trigger’ lever.

Reliability **
The machined-aluminum fixtures are very well made, but perfect Ruger reliability is compromised by clumsy trigger cams and poor magazine seating.

Safety *
This usually isn’t a review category at TTAG, but informed shooters should know to treat this gun with extra caution and attention. Since it doesn’t operate or handle like an ordinary gun, relying on your regular gun-handling training might not be enough.

Customize This *
This is already the ne plus ultra of customized rimfires, and you really can’t customize it any further.