Two years ago Brownells launched the first of their Retro Rifles line, a series of ARs that are faithful copies of old school Eugene Stoner designs. While not technically part of the Retro Rifles collection due to some modern deviations from the originals, Brownells new BRN-180 upper and lower receivers pay homage to a unique rifle design with an interesting history. A very short note from the historical record:

Prior to its adoption by the U.S. military in 1964, ArmaLite sold the rights to the AR-15 design to Colt. Whoops. In an attempt to get a toehold back into that gravy train, ArmaLite decided to develop a competing rifle but had to do so without violating any of the AR-15’s patents. What they came up with was the short stroke gas piston-operated AR-18, eventually sold in semi-automatic flavor to the civilian market as the AR-180.

Unfortunately for ArmaLite, the AR-15/M16 ship had sailed and the AR-18 was too late to the party to receive any real consideration for military use. Likewise, though mostly for different reasons, the AR-180 never saw commercial success. At least, until now. Though it’s a too early to be sure, I think the time is right and the BRN-180 designs are right and I believe Brownells has a huge hit on its hands here.

The BRN-180 and BRN-180S uppers stand apart from AR-15 uppers in a few significant ways. Instead of a direct gas impingement system, the BRN-180 is driven by a short stroke gas piston. Ammunition combustion gas from the bore is bled off into a gas block in a similar fashion, but that gas then acts on a piston located right there at the gas block. This piston kicks rearward, impacting the bolt carrier and setting it in motion.

Excess gas is bled off at the gas block rather than traveling into the upper receiver and out through the ejection port via the carrier. No hot, dirty gases in the bolt carrier and inside the receiver lead to cleaner, cooler operation. Forgoing the oddly-located charging handle at the extreme rear of the upper, the BRN-180 features a fixed charging handle mounted to the bolt carrier. This handle reciprocates with the carrier, of course, and serves triple duty. Obviously it functions as a charging handle — pull rearwards to cycle the bolt to the rear — but it also acts as a forward assist and as a brass deflector.

All three of these decidedly not-AR-15-like features are faithful in function and, in particular in the case of the charging handle and dust cover, basic aesthetic design to that of the AR-18 on which the BRN-180 is based. Deviating from the original AR-18 design is a modern, free-float, aluminum handguard with M-LOK slots and top Picatinny rail.

With the guide rods removed from the upper (or, really, just pulled rearward about a half inch), a simple downwards pull on the locking collar at bottom rear of the handguard unlocks the handguard from the receiver and allows it to be pulled straight off the barrel. This very cool feature is a carry-over from the original AR-180 design. This review features a BRN-180S upper, which differs slightly from the BRN-180 uppers. The gas piston on the BRN-180S is easily adjusted between two settings: unsuppressed and suppressed, with a U or an S peeking through a hole in the handguard so you know where you stand.

A 90-degree turn on the front adjustment knob does the trick, allowing more or less gas through the block and ensuring that the extra backpressure from adding a suppressor doesn’t drive the piston too hard.

On the rifle-length BRN-180 uppers (available in 16-inch and 18.5-inch), gas adjustment is a bit more involved. These uppers ship with two piston cups; unsuppressed and suppressed.

Swapping between modes involves removing the handguard, pulling back on the piston by hand to compress the spring, then lifting the cup up and out. Reverse the procedure to install the new cup. Simple, but certainly not as convenient as rotating a knob. At the muzzle is a replica of the AR-180’s three-prong flash hider. This design, with its solid bottom half, provides muzzle rise compensation and prevents muzzle blast from kicking up dust. I’d assume the flash hider reduces muzzle flash to some degree, too.

To remove the flash hider, you’ll want to turn the jam nut clockwise as though you’re tightening it onto the gun while preventing the flash hider itself from rotating (or go ahead and turn it counterclockwise at the same time). Underneath the retro flash hider are standard 1/2×28 muzzle threads and a nice barrel shoulder. The BRN-180 and BRN-180S are ready for the addition of a silencer or other muzzle device. Seen above is a YHM Turbo-K, reviewed on the BRN-180S here. Wrapping up the many unique and cool features on the BRN-180 uppers is a rubber bumper on the left side. This nice little touch prevents your folding stock or arm brace from marring the upper’s finish. It can be removed if it isn’t to your liking. Unlike the original AR-180, the BRN-180 upper receivers are compatible with standard AR-15 lower receivers. Though the BRN units don’t require a receiver extension, buffer weight, or recoil spring extending out of the lower, those parts won’t get in the way. Since a complete upper isn’t a firearm, you can order it from Brownells for delivery right to your door and slap it on a lower you already own. Just don’t forget the NFA stuff if you get a shorty upper. Standard AR-15 parts fit the BRN-180 lowers. Except, of course, for the unnecessary receiver extension and its associated parts. 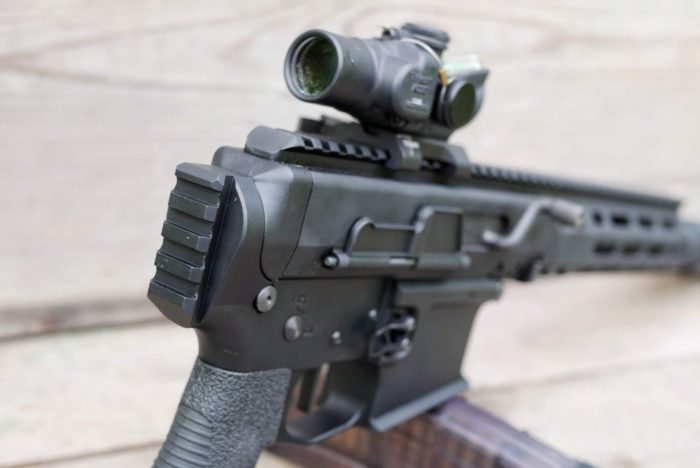 Instead, gracing the rear of the lowers is an integral M1913 Picatinny rail. This allows for the use of folding stocks like the Black Collar Arms Stock Option or the SIG SAUER stocks, or folding pistol braces such as the SB Tactical FS1913, FS1913A, upcoming Triangle Brace, and others. Two modern, thoughtful touches I appreciated when assembling the BRN-180M stripped lower both revolved around set screws. One set screw (shoulder screw, more precisely) retains the bolt catch, hugely simplifying installation over trying to hold the bolt catch in place against its spring with one hand while holding a roll pin in place with another hand and hammering it in with your third hand.

Additionally, as there’s no end plate to retain the takedown pin’s spring and detent, those parts are inserted up through the bottom of the BRN-180 (in the area that’s covered by the pistol grip) and are held in place with a small set screw. Though I found it unnecessary, a polymer-tipped tensioning screw is there to remove any slack between upper and lower receivers ensuring a rattle- and wobble-free fit. I completed my BRN-180M lower receiver by installing an Elftmann Tactical ELF-SE trigger with straight trigger bow, an Elftmann Ambidextrous Speed Safety (or as I like to call it, the ELF ASS), an ODIN Works XMR 3 Extended Magazine Release, and an ERGO SWIFT Grip. All of the other parts kit-type parts were scavenged from an ERGO Grips Enhanced Lower Parts Kit. Machining, fit, and finish on the BRN-180M are absolutely fantastic. It’s a beautiful lower receiver in every way and it assembled flawlessly. 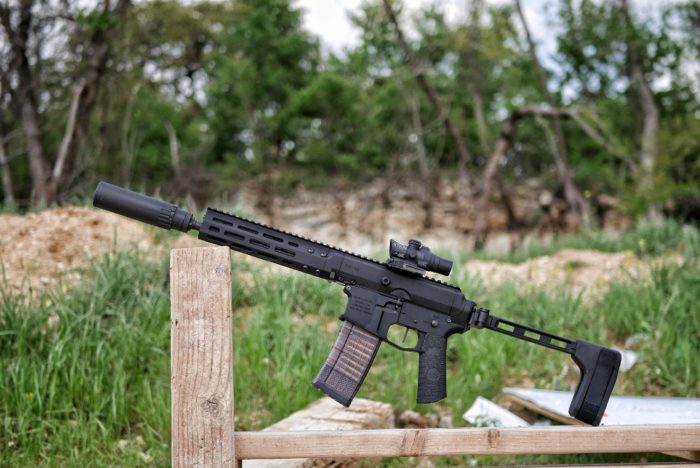 If you like really nice AR-15s you’re going to like the BRN-180. A lot. It shoots and feels like a thoroughbred but in reality it’s a workhorse.

In the course of a few weeks we’ve put nearly a thousand rounds through the BRN-180S upper on the BRN-180M lower, and this thing’s a beast. Unsuppressed, suppressed, with the pistol brace folded to the side, with it or a shoulder stock extended (yes, a shoulder stock makes it an SBR with the short upper), out in the woods in near-freezing temperatures and out in oil country in the Texas heat and dust, it was always in its element.

This little guy from Brownells keeps on chugging and does so with a huge smile on its face. It absolutely loves sending rounds downrange and it’s one of the smoother, nicer-feeling short stroke piston guns I’ve shot. The BRN-180 is also compact and pretty darn lightweight. In fact, with the stock or brace folded the BRN-180S is extremely compact. A traditional AR-15 simply can’t compete with this. 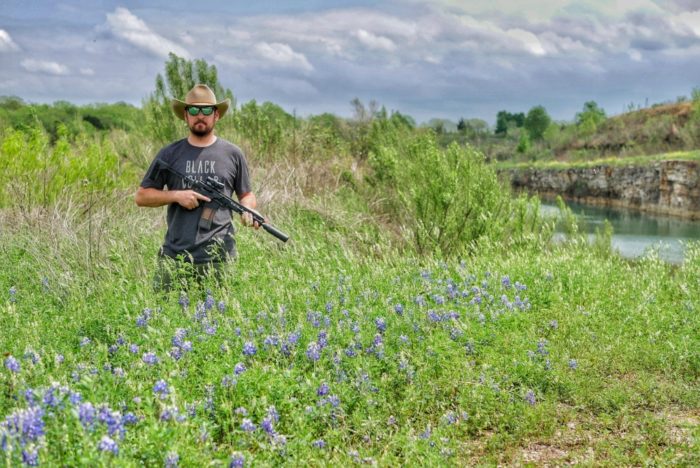 When suppressed, the BRN-180S beats any direct gas impingement AR-15 hands down. Not only did it seem quieter to me at the shooter’s ear than a standard AR thanks to the lack of high-pressure gas venting out through the ejection port, it sends no gas into the shooter’s face, either.

In part this, too, is because of the short-stroke piston system, but it’s also due to the lack of a rear-mounted charging handle. With the rear of the upper receiver sealed off, there are no gaps through which those eye-watering ammo combustion gases can jet into your face.

In short, the BRN-180 makes a fantastic suppressor host. While gas piston guns generally don’t enjoy a reputation for impressive accuracy, the Brownells BRN-180 . . . well it isn’t impressive. But it doesn’t disappoint, either. This 10.5-inch .223 Wylde is up for delivering 1 MOA to 3 MOA, 5-shot groups at 100 yards depending on ammo. 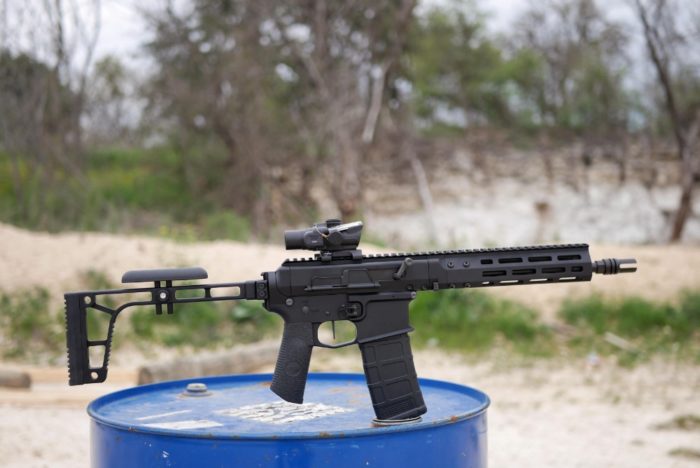 Out on a west Texas hog hunt, this BRN-180S and BRN-180M combo dispatched a coyote at 40-ish yards and scared the heck out of a couple other coyotes at 650-ish yards. They were waiting for a cow to give birth so they could eat the calf, but a couple of 5.56 rounds whizzing by got them to turn tail. Even if the cow herself didn’t appear to notice the suppressed rounds, the coyotes sure did. Living in a racquetball racket bag, this setup, suppressed with a YHM Turbo K, has been by my side for weeks as my primary Coronazombie defense gun. After carrying it all around Texas and shooting it in varying weather suppressed, unsuppressed, and with all sorts of different ammo, I’ve come to trust the BRN-180. I’m happy with my choice of trigger and other components, and for Brownells’ part they’ve put together an absolutely awesome upper.

Compact, reliable, adjustable, accurate . . . I can’t think of a single darn thing I would change on the BRN-180S upper or the BRN-180M lower. Nor with the complete gun as built here. Though experimenting with different charging handle designs would be fun.

Style and Appearance  * * * * *
I think both the upper and the lower look awesome. The right-side charging handle and lack of a receiver extension are unique and good looking, and the quality of the machining and anodizing are great.

Ergonomics  * * * * *
Many of us think there’s no improving on the ergos of an AR, but the BRN-180 proves that isn’t so. It keeps all the good parts, but gets rid of that awkwardly-placed rear charging handle and allows for the use of folding stocks and braces. Very cool.

Customize This  * * * *
Ultimately, the BRN-180S is less customizable than a standard AR-15 upper since much of it is proprietary. This includes the barrel, which cannot be swapped by the end user.