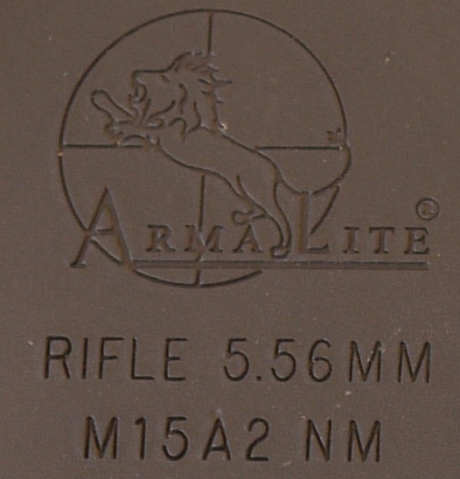 The National Matches at Camp Perry, Ohio are the crown jewel of shooting sports. Since 1903, when President Theodore Roosevelt established the games, thousands of competitors have traveled from the far reaches of the United States to prove themselves worthy of the title “marksman.” In recent years, the National Matches have been opened to a growing number of customized rifles. The toughest division remains the Service Rifle division. ArmaLite produces a version of their M-15 specifically designed for the National Matches Service Rifle division. The company has graciously loaned me one for testing and evaluation for my summer campaign. No holds barred . . .

At first glance, the ArmaLite National Match M-15 A2 looks exactly like my Rock River Arms (RRA) National Match Service Rifle I’ve been using in competitions. No problem there. The entire point of the Service Rifle division: every single rifle competitors’ use must be visually and functionally identical. Every rifle must have the same dimensions, the same sight radius, the same barrel length, the same trigger pull. One of my spotters said it best: “With some of the other divisions, you can customize the rifle and mold it to fit you. With Service Rifle, you fit yourself around the rifle. That thing isn’t going anywhere.” 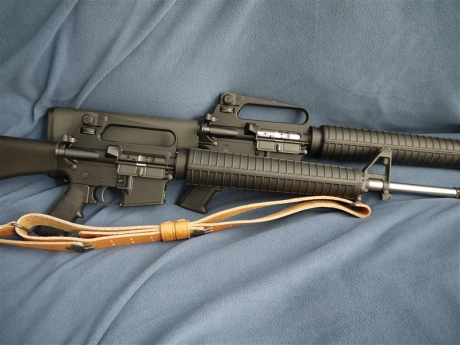 Even though a lot of the specifications for the division are set in stone, competitors can still change a number of features to suit. The most significant of these options: the component materials. The Rock River Arms NM AR bolt carrier group is chrome. The ArmaLite BCG is a standard blued metal. RRA says the chrome increases the rifle’s reliability. But if you’re not cleaning your National Match rifle immediately after every competition you’ve got bigger problems than a dirty bolt to worry about.

The only other major differences between the rifles: the additions ArmaLite’s made to the sights. 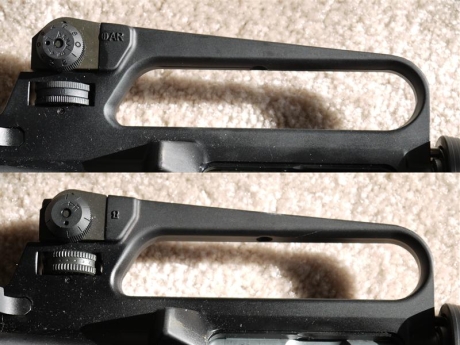 RRA (bottom) left their adjustment knobs plain, black and unmarked. ArmaLite (top) put numbers on their sights for easy reference. I’m a big fan of this feature. Not only does it let the competitor know that the sights remain in the same configuration between matches, but it gives shooters an easy reference when dialing-in changes. I’ve adjusted my sights to account for wind or low impacts on the line a number of times—and promptly forgot what adjustments I made. When moving from 300 to 600 yards, it’s a bit of a PITA to have to count each click when adjusting the RRA’s sights, especially with the .223 Remington round’s trajectory. 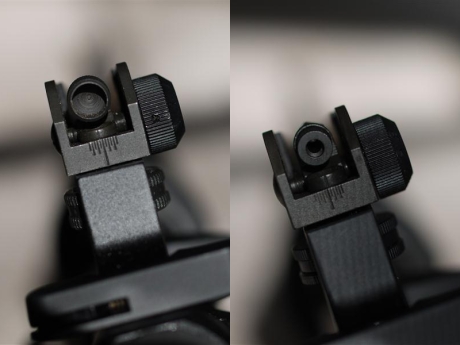 ArmaLite also changed the rifle’s sight’s aperture. On the RRA (left), the aperture is pretty simple: just a small hole with some shrouding to keep the sunlight out. ArmaLite (right) created an interesting shroud to cover it and protect it. Unlike RRA’s aperture, ArmaLite’s plug can even accept small lenses for those with poor eyesight to see better (RRA also has this, but it’s an aftermarket addition). Going one step further, ArmaLite also made their rear aperture hug the adjustment screw a little bit tighter than RRA’s aperture, which has a tendency to wobble around.

The stock is the final difference between these National Match  rifles. While both come with a fixed A2 stock, the texture is different. ArmaLite’s stock is smooth. The RRA’s stock has a matte finish to it. As far as I can tell, the difference doesn’t affect either gun’s accuracy. But it’s early days to pass judgement on this interesting design choice on RRA’s part.

Two rifles, identical in function, dimensions, fit, feel, and even (just about) price. But is one better on the firing line? Stay tuned to find out. And keep it here for blow-by-blow blogging on my ballistic summer of love.

[Special thanks to NOVA Armament, my local gun shop here in Herndon, VA, for doing the transfer.]