A company by the name of Arex is responsible for what is “the first pistol ever to be produced entirely in Slovenia,” and it’s being imported into the U.S. by FIME Group, the company responsible for loaning me this T&E sample. Back in September, we posted a First Look piece on the REX, and I’d still recommend jumping over there for the awesome Arex factory tour video that Polenar Tactical created. Serious machinist eye candy there. Well, CNC machinist, at least. Jumping right to the swan, duck, or elephant in the room — metaphors aren’t my cup of bourbon — the REX offers a few things you won’t find on a SIG P226. What’s a slide stop on a SIG is actually a manual safety on the REX. It’s ambidextrous — mirrored on both sides of the gun. Whether the hammer is cocked or at rest, the safety can be engaged. Additionally, the slide can be racked even with the safety on. When off, the lever nestles up rather flush with the top of the grip, making accidental engagement highly unlikely. Conversely, sweeping it off is natural and requires less of a concerted effort than engaging it. There’s a clean detent and satisfying “click” at both ends of its travel. Ahead of the manual safety is a control lever that appears basically identical to the decocker on many SIG pistols. In this case, the duck really is a duck and that lever really is a decocker. But it has a trick up its sleeve — “wing” if I were more committed to this duck crap — and it doubles as the slide stop. Whether using it to lock the slide back or to release the slide, it feels just like a slide stop should. As a decocker, it feels just like a SIG’s but maybe with a slightly shorter travel.

Of note, when used to release the slide from lock, it comes to a hard stop and will not also decock the REX. In order to put it through its full travel and decock the hammer, you’d have to let back off of it and then depress it again. Nice touch. Eagle-eyed readers (no more swans or ducks, I promise) probably noticed one more difference in the REX zero 1’s controls as compared to its SIG progenitor: an ambidextrous magazine release. Push the button from either side, and the 17-round magazine drops free. Mags appear to be very high quality — I’m guessing they’re Mec-Gar units. For the record, magazines aren’t interchangeable between REX and SIG, due at least to the difference in how the magazine catch engages the body. A handful of P226 variants have front cocking serrations, but the majority are unadorned. It looks like all of the REX versions — this is the “S,” or Standard, which is the only one currently available in the U.S., but Arex also makes a Combat and a Compact (no idea how they’re going to handle the single-letter designation on those ones) — offer a grip surface both front and rear.

The Picatinny accessory rail extends farther than a P226’s, adding one additional slot and ending flush with the muzzle. Slide rails are extended forwards to match. A blade-style loaded chamber indicator adorns the top of the slide. The rim of a chambered round lifts it up just slightly. Not really enough to stand out visually, but it’s readily apparent to the touch.

The REX zero 1’s frame is 7075 aluminum, hard anodized, with a steel locking block. Machining and finish are fantastic. The frontstrap and backstrap are serrated vertically. 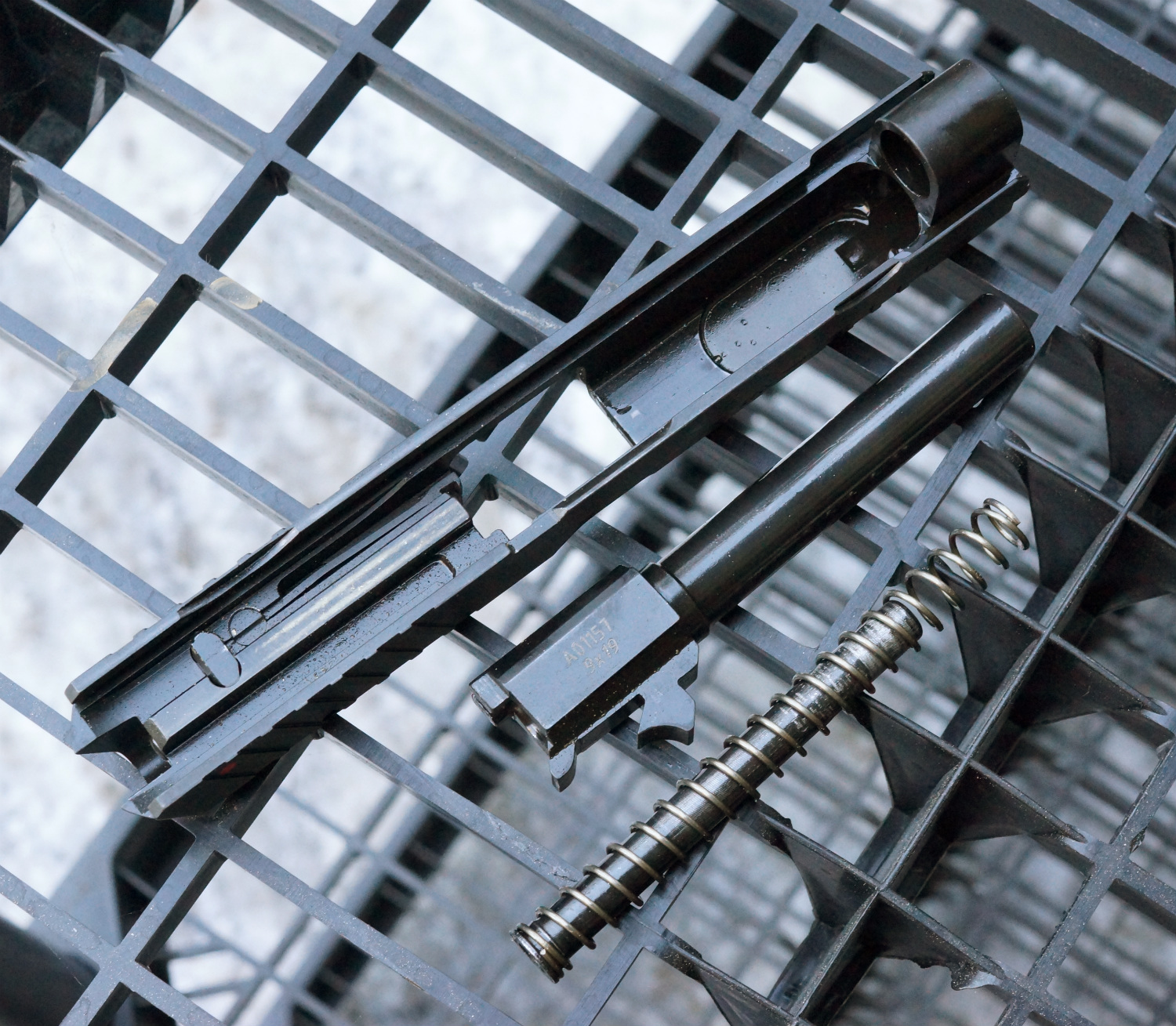 The slide and barrel are made from bar stock — machined and cold hammer forged, respectively — and nitrocarburized. The steel guide rod is hollow, which is kind of cool in a retro way. Again, barrel and slide machining and finish are excellent. 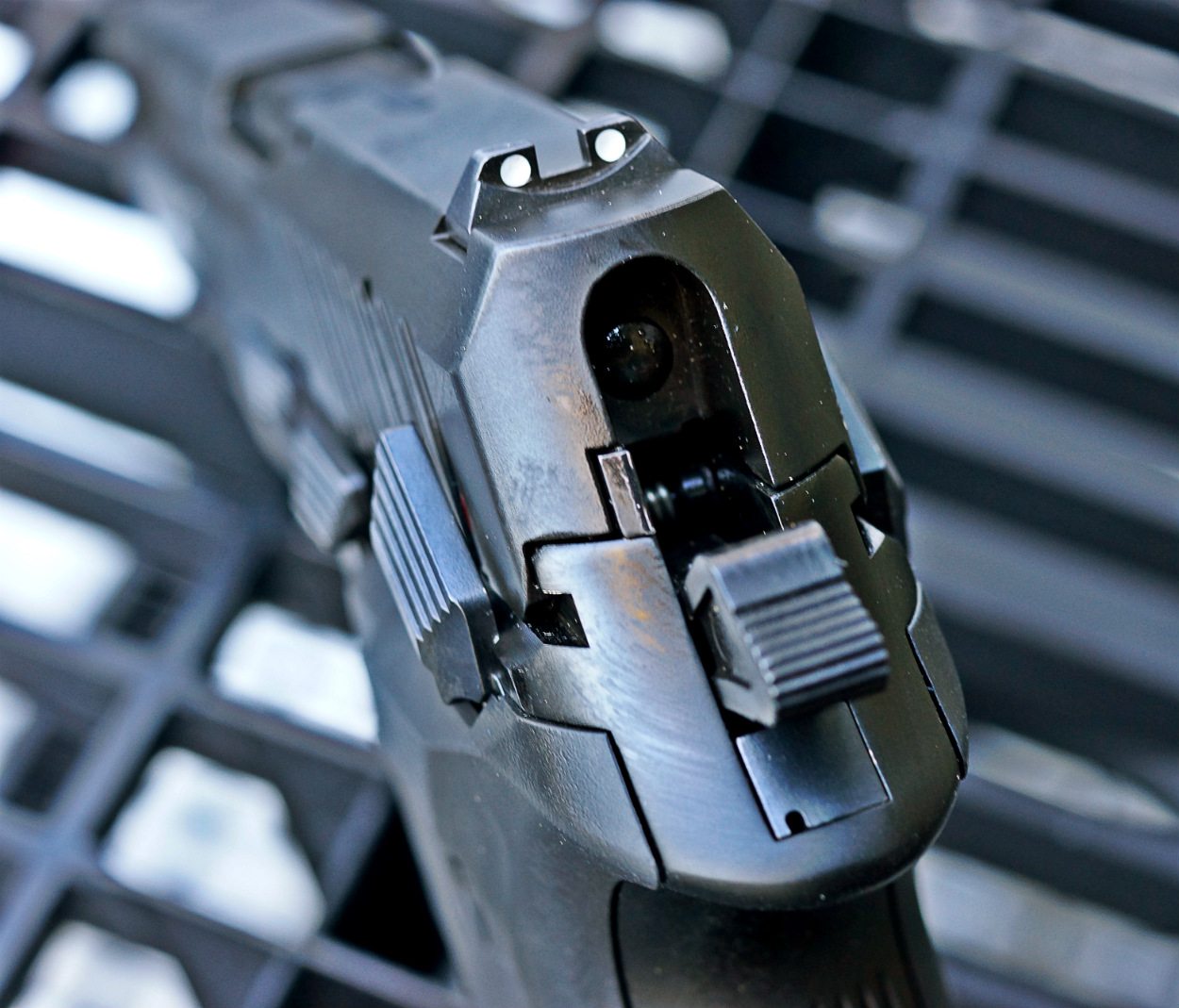 Sights are steel, 3-dot affairs dovetailed into the slide. There was some conflicting info as to whether or not they used standard SIG dovetail cuts, but the final verdict on that is “not.” I like the serrations and recessed dot on the front sight. The sights seem a little short, especially when compared to the amount of gun that stands tall above the web of your hand, but they were fast and easy to acquire and worked well for slow, precise shooting as well. 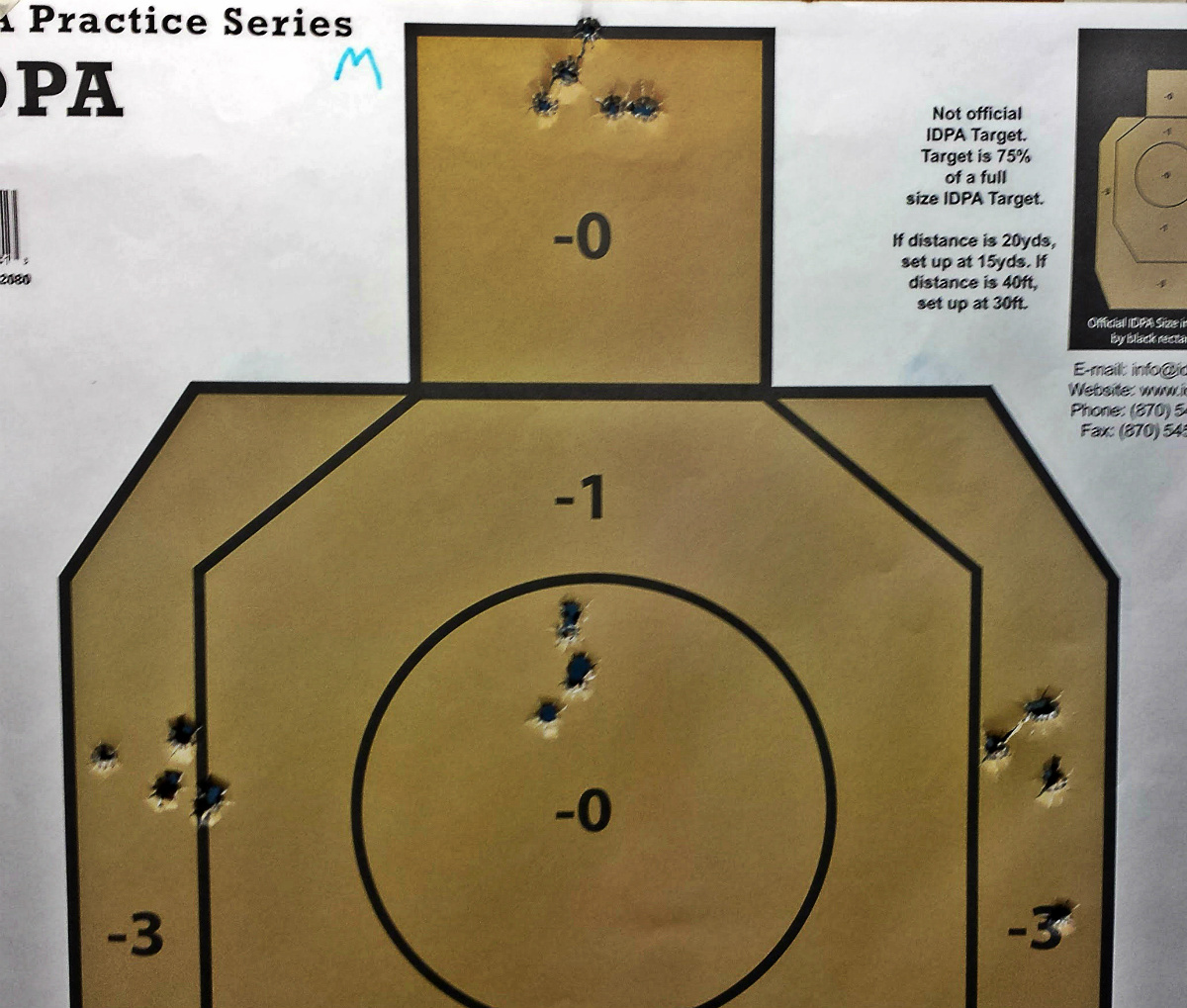 From 92.5 grains to 147 grains, the REX zero 1 S shot everything accurately. Above are 5-shot groups at 15 yards with four brands and three weights of 9×19 ammo. With a nice curve radius and rounded edges, the REX’s trigger shoe is comfortable. I definitely prefer the feel of metal here to plastic. Double action is long and heavy — 11.7 lbs — but fairly smooth. It stacks a bit before the break, which is good but not creep-free. The trigger then comes to a hard stop a few millimeters short of touching the frame.

Single action is short and crisp, weighing in at about 4.5 lbs. If you’re engaging the single action trigger for the first time, there’s slack to take up — maybe a centimeter of it — before it stops against the sear. The break is clean with barely any perceptible creep. After that, a pronounced reset isn’t too far away and only about half of that initial slack has to be repeated. Running the REX in single action was great, and I was able to shoot it rapidly and accurately thanks in a big part to the very nice trigger pull. Here’s a graph showing both the double action and single action on the same scale. Again, all of this awesome information is thanks to the Dvorak TriggerScan system.

As much as I hate to say it — and this won’t be the last time — it’s very much just like a SIG here. As DA/SA triggers go, that makes it better than average. The REX’s trigger is just as smooth, consistent, and crisp as a P226’s.

The short version is, you guessed it: it shoots just like a SIG. Blind taste test shooting the REX and a P226 back-to-back, I’m not sure you could tell which is which. For those not familiar with a P226/P229, the REX shoots smoothly and confidently. The grip is fat and fills up a dude-sized hand. Recoil impulse is soft and controllable, but the muzzle does want to flip a bit more than on most of your popular, striker-fired guns with a low bore axis. Grip angle is natural — a bit more on the upright end of the popular pistol grip angle spectrum — and the shape is pleasingly ergonomic.

This loaner REX came straight out of the box and I put 500 rounds through it without cleaning or lubing. About half of those rounds were shot at an indoor range, and about half out in below-freezing temperatures in the N’Idaho woods. Again, with ammo ranging in bullet weight from 92.5 grains to 147 grains, bullet profiles from FMJ round nose to flat nose to flying ashtray hollow points, from +P pressures to weak, cheap reloads, the REX ate it all. Not one single hiccup or stutter whatsoever, or any indication that it was even close (no weak ejection, no slight hangups on feeding, etc). It may be that the REX is slightly soft-sprung. TTAG reader, Arthur from Michigan, e-mailed to let us know that Wolff springs for the P226 fit the REX properly and that he’s very much enjoying the 16-lb replacement (part number 46016). It still runs plinking ammo just fine, but there’s noticeably less slide impact at its full rearward travel. While that slide impact is not a mistake and Arex says the REX zero 1 is designed to exceed a 30,000-round service life and is fully +P rated, if I owned this pistol I’d probably give a 15- and 16-lb recoil spring some range time. Arthur says it smooths the gun out and softens felt recoil even further, and I believe it. I’d likely stick with the standard one for defensive use, though. My only on-the-range complaint about the REX here is the magazine release. A closer look at the photo above tells part of the story — the mag release button is actually recessed below the level of the grip panel, and curves inwards from there. Obviously this is to prevent accidental activation on what is billed as a duty pistol, but it also hinders purposeful activation. With the girth of the grip on this gun, I really can’t reach far enough with my thumb to get the clean, perpendicular press inwards on the mag release button that’s necessary to clear the grip panel’s interference unless I shift my grip.

The rest of the REX’s controls were definitely to my liking. The slide stop is out of the way of my thumbs so the slide locked back on empty without fail. That said, and again thanks in a large part to the girth of the frame, it’s hard for me to use it as a thumb-activated slide release without slightly shifting my grip. But I tend to slingshot the slide anyway. The safety is where it should be — maybe a touch high — and disengages naturally. When swiping it off before firing, I found I’d just continue to ride that control with my thumb while shooting. It isn’t quite as nice as a 1911’s safety lever for that purpose, but it works.

MSRP on the REX zero 1 S is $599. The P226 series starts at $1,015. In every way it appears to be at least equivalent in quality of materials, machining, and finish. It adds the option of using a manual safety to carry cocked and locked, an ambi mag release, and two additional rounds of capacity. Actually, okay, the cheap feeling, plastic grip panels are a quality let-down compared to the stellar rest of the gun. Full circle back to “the duck test,” and it turns out the REX isn’t a SIG even if it quacks like one. However, if you’re a fan of SIG’s P226/P229 I’m entirely confident you’re going to be a fan of this pistol. It’s highly accurate, runs like a top, seems to eat every type of ammo out there, and cuts the actual duck’s MSRP nearly in half while adding a few more bells and whistles. What’s not to like?

Ergonomics: * * *
As a dude with dude-sized hands, the gun is still fairly thick. It’s comfortable, don’t get me wrong, but the magazine release and slide stop are hard or impossible for me to reach with my thumb without breaking my grip.

Customize This: * *
K-VAR has a handful of holsters available, plus spare mags (just $25). They apparently have some tritium night sights in the works. That’s about the extent of the aftermarket for the REX at this point.

Concealed Carry: * *
It’s actually a fairly lightweight gun for its size, but it’s a duty-size pistol. Likely too tall to conceal easily, and on the thick side as well. More of an OWB, home defense, or otherwise not concealed gun.

Overall: * * * *
I’m not the biggest fan of SIG ergos, aesthetics, or the large amount of gun they put up above the web of your hand, and all of this colors my ultimate opinion of the REX. I can’t give it five stars because I like other modern pistols more and I shoot them better. However, if you’re a fan of the P226/P229 — and a fan of the guns rather than married to the SIG brand itself — you’re going to love this thing. The REX zero 1 S checks all of the SIG boxes, adds a few more of its own (ambi safety, ambi mag release, etc), and does so at just over half the SIG MSRP. 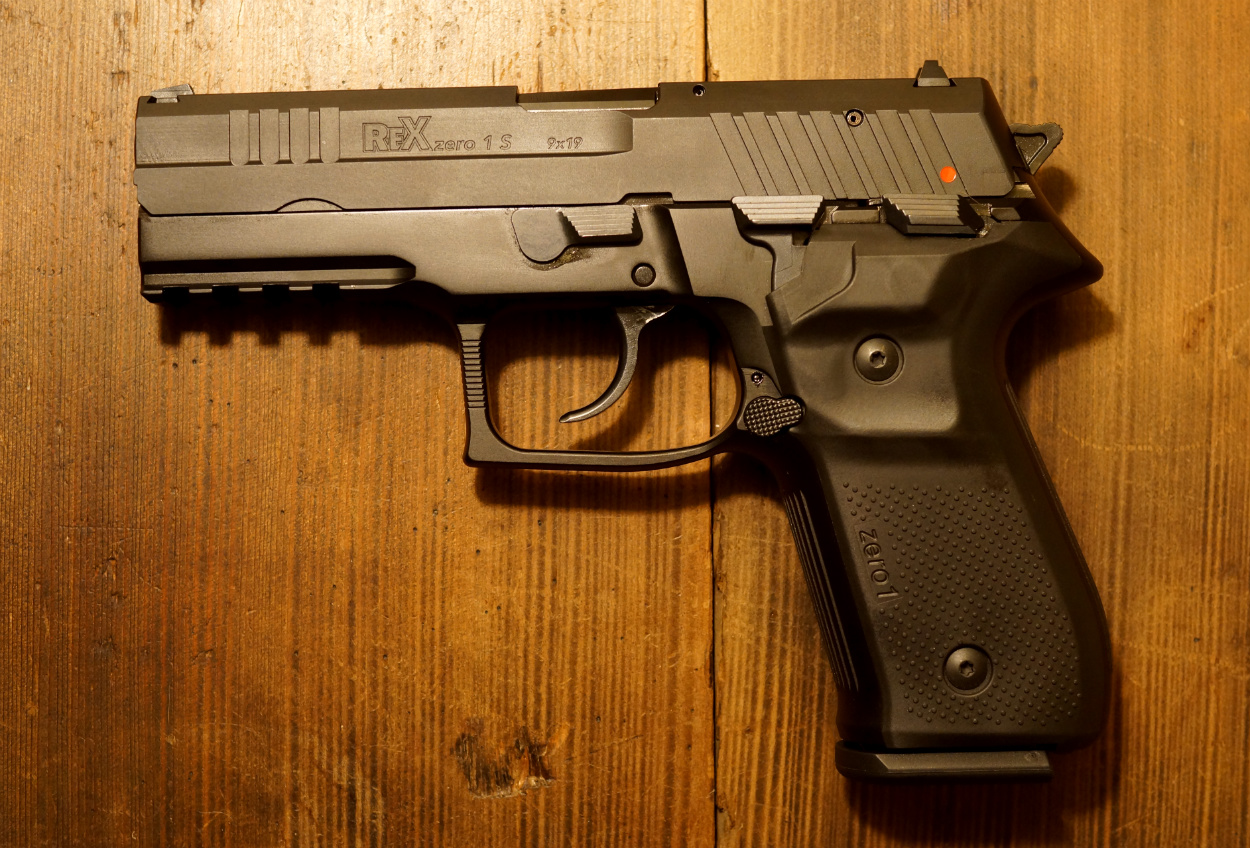