Like RF’s search for a marriageable Sabra, the quest for the perfect holster never seems to end. Because it doesn’t. Even if you’re the proverbial man with one gun (causing wariness amongst the wary) you need different rigs for different situations. And whether you own a single heater or a safe full of ballistic baubles, the go-anywhere gun guy can no more resist the lure of a new carry system than he can his forgo his hourly dose of TTAG. And just when you thought your holster drawer looked fuller than Adam Richman at an all-you-can-eat gourmet buffet, there’s a new option: Sticky Holsters . . .

Regular readers and concealed carry cognoscenti will immediately see that Sticky’s stuff looks mighty familiar. Remora makes similar no-clip, no-slip, slip-in holsters. Our man Finn loves ’em. Ralph is also a big fan (in every sense of the word); he’s ready to rock and roll with Ramora when he’s on his bike or quaffing [non-alcoholic] beers with the boss (who was almost banned from Ralph’s local).

In fact Mike Christoff, Sticky’s owner and the brains behind their designs, is a Remora alum. To hear him tell it, he had a better idea for a tackier (in a good way) holster. When Remora nixed his idea, he struck out on his own. Mike took a slightly different tack (so to speak) with his Sticky designs. He went with a lighter weight, thinner, floppier design. No problem there, per se. In fact, Sticky’s thinner design make them skinnier and lighter than Remora’s products. Where Remora offers two models — one with a soft top and one that’s reinforced (read: stays open) for re-holstering — Sticky’s products are all non-reinforced. More on that in mo’ . . .

I own two Remoras: one for a Kel Tec P3AT fitted with a Crimson Trace Laserguard and one for a Kahr CW9. So I’ve compared carrying both guns in each holster design. The Sticky holsters stay in place more comfortably and effectively over a full day of IWB (Inside-the-WaistBand) carry, even with something as humongous as a full-size 1911. I occasionally catch myself pushing a Remora back down. That just doesn’t happen with a Sticky. You can slip a Sticky in the elastic waistband of a pair of gym shorts or sweatpants; no belt required. Assuming your gun isn’t too Proustian (i.e. heavy) that’s that for your gat. And unlike a federal program’s budget, the gun stays right where you put it. Stickys are light and conform nicely to your gun’s shape. They’re not as comfortable to wear as a pair of old slippers but they’re not far off, either. 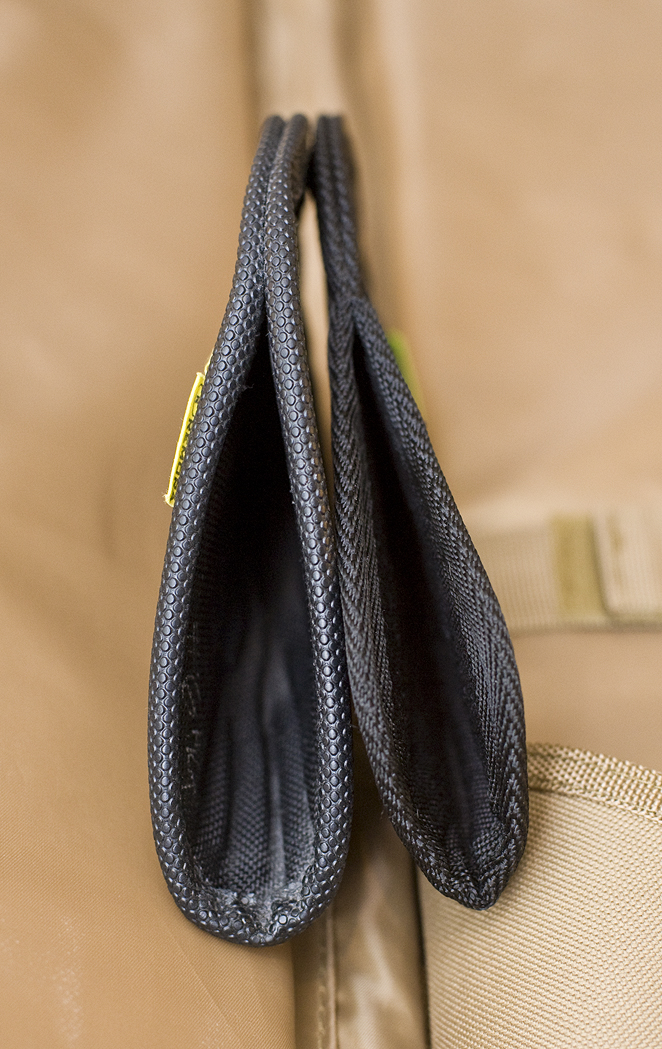 Once you draw your gun out of a Sticky, though, you can’t re-holster it one-handed. In fact, Sticky “strongly recommends” you re-holster using your off hand to remove the holster, slip your gun back into the Sticky and then re-insert the freshly holstered gun back in your pants. This is how they do it (to it):

If you have a free hand, that works just fine. Just don’t laser your digits like the guy in the video. If you like to carry your gun in the 3:00 to 4:00 position, OFWGs and those not practicing yoga will have a tough time removing a Sticky with their off hand. And no matter where you carry, if your other hand is otherwise occupied or incapacitated, you’re SOL — unless you use your pocket, set your gun down or go south of the border. 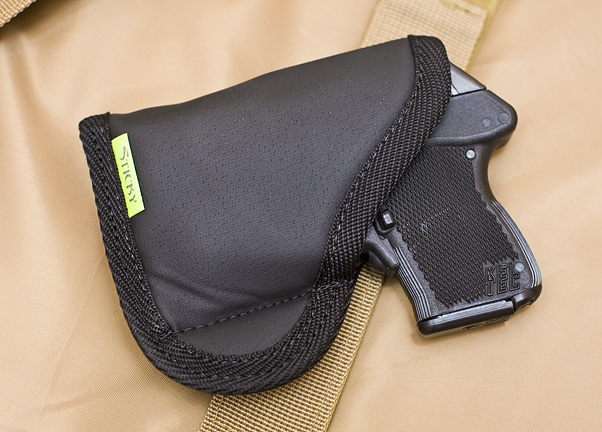 To paraphrase our flight attendant friends, in the unlikely event that you ever have to use your gun in a self-defense situation, once you’ve determined there’s no longer a threat, you’ll want to return your tray tables to their original, upright and locked position and re-holster that baby. You really don’t want to be standing there with a gun (or some other appendage) in your hand when a black-and-white arrives on the scene.

As Edward Lewis told Vivian Ward, you’ll either love the Sticky or you’ll hate it. If you love it, you’ll always love it. If you don’t, you’ll banish it to your sock drawer. So as long as you understand that the Sticky loves your gun right until it hates it, the holster’s a useful addition to our modern lifestyle. Home carry in sweatpants? All day long. Well, hopefully not literally. Some of us do have a life (allegedly).

Comfort: * * * * *
Other than some non-holster thingies (think Versacarry or Clipdraw) the Sticky’s the most comfortable IWB holster design in the history of the world, ever.

Concealability * * * *
As long as you’re wearing something to cover it up, your gun in a Sticky is super-concealable (thin, unobtrusive, stealthy). Think reverse Robin Hood (there’s no Friar tuckable option.)

Ergonomics * * *
For carry and draw, great. You can vary the carry height and cant (within reason) and it stays put. The three-layer design has a nice, slick interior so drawing your gun (even while pressed snugly between your hip bone and your belt) is no prob. Re-holstering is ridiculous.

Overall * * * 1/2
Sticky Holsters are a well-designed, affordable carry option for people who don’t mind dropping their gun—and I mean dropping it—when the heat make the scene.