As a result of RF’s beneficence, I’m now the extremely proud owner of one of the slickest guns I’ve ever seen. The Gemini Customs SP101 is a thing of beauty and a joy to shoot – especially when it’s shooting .38s. And while lots o’ folks would relegate it to a specially padded and dehumidified corner of their safe, that’s just not me. I’ll get a lot more enjoyment out of it by carrying it from time to time so I can, you know, see it. And shoot it at the range. Even though that will inflict the inevitable wear marks and occasional dings that come with using a gun the way it’s designed. But along with the the great gun came a problem . . .

For such a popular and widely sold revolver, there are relatively few decent choices in holsterage. There are plenty of options for the short-barreled 2.25″ SP101 version. But if toting the 3″ or 4.2″ gun strikes your fancy as it does mine, your options are few.

Sure, there’s always the Remora, but I’ve become pretty partial to the comfort of OWB pancake carry. So after a fair amount of furious Google-fueled flapjack foraging and a fair amount of forum scrounging, I ordered one of the few good options out there for my three-incher – the tastily named Simply Rugged Silver Dollar Pancake. As each Simply Rugged holster’s made to order by owner Rob Leahy, don’t expect next day order fulfillment. As their web site spells out quite clearly, SR specifies a three to four week lead time (more for fancy scrollwork or engraving). And sure enough, 22 days after placing my order, my Silver Dollar showed up in my mail box. The holster’s made of sturdy, nicely-formed leather that hugs the SP101 like its mama would. An optional hammer strap is available, but I didn’t opt for one as the relatively deep pocket of the Silver Dollar cradles the revolver snugly. The optional IWB straps I got, though, screw on and snap closed securely. Stitching is tight and even. And my oxblood model came complete with that freshly tanned, new leather smell. Ahhhh.

Strapping it on and loading it up with an actual gun provides more comfort and concealment than expected. While the holster’s made to order for the Ruger, it takes a little nosing to get the gun in, especially when you get down to the cylinder. So while there’s nothing to impede a fast draw, re-holstering won’t be quite as speedy. This may change with time, but given the leather’s moderate stiffness, my guess is that’s the way it is and a little help from my off hand will be required.

When it comes to strapping one on, the Silver Dollar fits snugly – but not too tightly – against the body making for very easy concealitude. In fact, it hugs my rounded form even better than my trusty CW9 in its pancake of choice, the DeSantis Speed Scabbard. The Dollar’s secondary, lower slot makes it perfect for cross-draw carry if you swing that way. I don’t…not that there’s anything wrong with that. 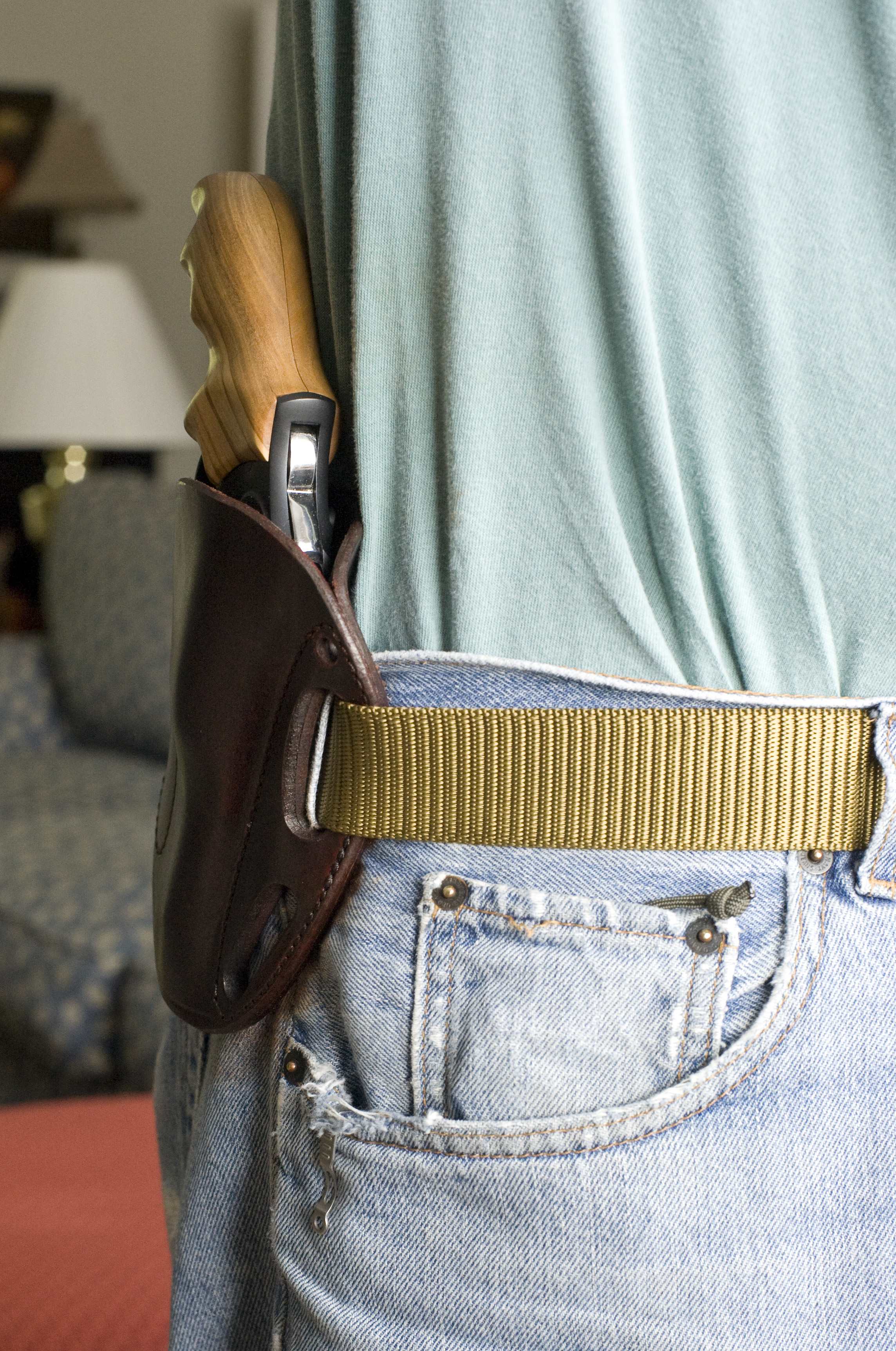 I like to wear mine with a fairly sturdy 5.11 TDU belt because a proper gun belt still languishes on my wish list. Who knows…Father’s Day’s coming up (hint, hint). Anyway, given that the SP101’s not exactly the lightest heater I’ve schlepped on my appointed daily rounds (it’s a good 12 oz. heavier than my CW9), the Silver Dollar makes for extraordinarily comfy carrying. It rides at just the right height (for me, anyway) and doesn’t dig in while sitting either at the computer or behind the wheel. When you want to go for the added stealthiness of IWB carry, the optional straps work nicely. They come with sturdy hardware and accommodate belts up to 1 3/4 inches. I probably won’t make use of mine often as I like the whole OWB thing so much, but it’s nice to have the option.

All was not powdered sugar, blueberries and maple syrup in Silver Dollar Pancakeland, though. As you can see below, after a few hours of carry I had a holster chalk outline on my most comfortable worn-ass jeans. So I emailed Rob to ask how to make sure that all the excess oxblood has been drained from my holster before putting it in contact with clothing again.

I got his answer within a few hours. After expressing his dismay (“That Sucks!”) he advised not trying to wipe it down, as that would likely only make things worse. He suggested applying some neutral shoe polish to seal it for now, but said he’d be sending a new one out ASAP. I appreciated the quick response as well as the shoe polish advice, but I’ll be leaving this one in the holster drawer rather than risking stains on any more of my duds. All in all, though, I’m happy with the purchase. While the dearth of carry options for the non-snubby SP101s is a little annoying, the Silver Dollar is nicely made and makes carry a pleasure. As long as you’re not picky about your clothes.

Fit and Finish: * * * 1/2
It’s a pancake holster, so there’s nothing really groundbreaking here. It’s sturdy, nicely designed, fits my gun and is well-made. Points off for having to use two hands to re-holster and giving my jeans scarlet fever.

Comfort: * * * * *
This is where the Silver Dollar really shines. It makes packing a heavy heater all day a breeze.

Concealability: * * * * *
Another really strong point. Even carrying a decent sized revolver like a longer-barreled SP101, the Dollar hugs your bod nicely making concealment under a shirt a cinch. And the optional IWB straps give you another deep cover option.

Retention:  * * * *
I didn’t opt for the hammer strap add-on, but there’s not much need. The Silver Dollar makes your SP101 feel comfy and right at home. Unless your regular routine includes somersaults and backflips, your gun will stay put.

Overall: * * * *
A good product at a reasonable price. It’s a great way to tote a non-snubby wheelgun (sorry Ralph) all day without needing a chiropractic adjustment. The staining is a definite aggravation, but props to Rob Leahy for handling the problem quickly and courteously. Assuming yours is colorfast, the Silver Dollar’s a nice option for Ruger revolverphiles.