Over the past five months I spent a good bit of time with Riton Optics’ RT-S Mod 3 Gen2 1-4×24/IR Scope, a great optic with notably clear glass and fantastic value. The setup has yet to let me down, but not all the credit is due to the scope, of course.

Without a good mount, optics are subject to any number of incidents that can lead to breaking the scope’s zero, rendering it unreliable. For this reason many folks, including myself, are very picky and keep a brief list of reputable, time-tested scope mount manufacturers to instinctively rely on for a solution.

This time, however, instead of picking-up one of my go-to one-piece mounts, I paired the optic with a 7.5-ounce tactical/hunting mount from the same company, the RT-M 30mm/1in Precision QD Scope Mount by Riton Optics (above). Breaking away from my usual selection of brands would normally be tough except that I had previously examined Riton’s mount, which is machined from 6061-T aluminum with a black anodize finished, and found several of its features intriguing. The first part of the skeletonized mount to catch my eye were the 1-inch scope tube inserts nested inside of each 30mm ring on Riton’s Precision QD mount.

These inserts allow you to use the mount for scopes that have a 1-inch tube. It is an interesting concept and for a QD mount that is designed to be moved from one firearm to another quickly I can imagine several fair use cases. However, in this article we’ll be working with the 30mm rings that are more commonly used in conjunction with 1913 / Picatinny rail-mounted optics.

And thankfully removing the inserts is very easy. Simply separate the base from the top halves of the 30mm rings and lift the 1-inch aluminum inserts out. 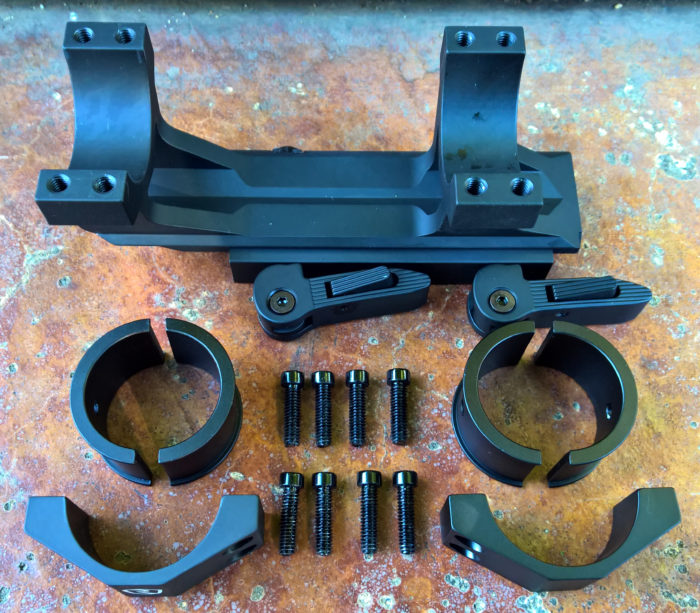 Disassembled, Riton’s RT-M Precision QD mount lays-out in pieces like many one-piece scope mounts. A base, ring halves, and eight good-quality T-25 Torx-head screws to secure your scope within the rings. The second feature to grab my attention was the QD mounting system, consisting of two nice push-button locking levers which depress a 3-inch locking bar that secures the mount to any 1913/Picatinny or Weaver style rail.

The levers themselves are well-finished and smooth-sided with a nice rounded end, allowing you to get your finger between the bar and lever when disengaging the bar from the host rail. The top and bottom of the levers have textured surfaces.

And the pinned-in release buttons have very good spring tension behind them, keeping the levers from backing-off the locking bar due to vibration or accidental engagement. The left side of the mount provides access to the adjustment nuts, which are each held in place by both a vertically-cut channel and two additional hex set screws. The set screws are functional, and give the mount a more technical look, but are redundant since the channel adequately keeps the nuts locked in position.

To adjust the tension of the clamp, release the levers so they are perpendicular to the locking bar, and then push them towards the bar. The nut will protrude from the other side, allowing you to rotate it, thereby adjusting the tension. Essentially, you have six positions to choose from within each full revolution of the nut. The RT-M Precision QD mount’s cross-bolts are one of its finer features. Many companies cut major corners with regard to cross-bolts, leading to stripping.

This mount goes the extra mile with their cross-bolts, using completely square bars that sit in well-matched square channels. Then, hex-head set screws lock the cross-bolt into the channel, while still allowing them to move side to side for tension adjustment. As I often do, I used The Device to mount/cross-deck the Riton RT-S Mod 3 Gen2 1-4x24IR scope. The RT-M being a 30mm tubed optic, the RT-M’s 1-inch tube inserts were removed prior to installation. 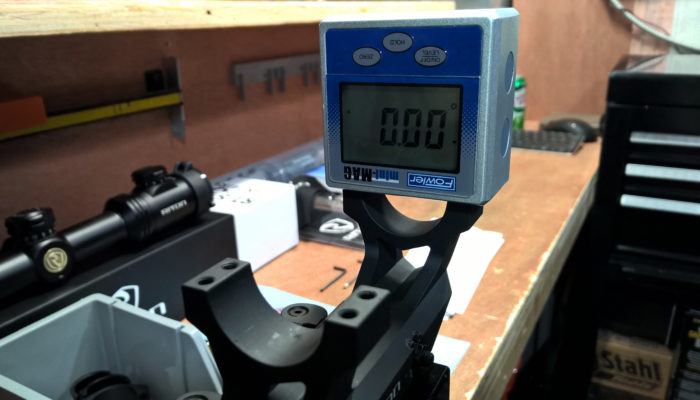 One thing I always check for on mounts is if the top faces of the bottom half of the rings and the base section between the rings (top of base) are level to the host.

I’ve found a consistent correlation between these measurements and overall quality of craftsmanship and once mounted to the leveled Device the RT-S Precision QD mount passed with a perfect score of all zeros. I opted not to lap the rings of Riton’s Precision QD mount because it is a one-piece base with well-machined rings. And after pre-fitting the scope I was fairly certain lapping was not needed. Second, if the rings did need lapping, I wanted to find out the hard way and deal with it. Well, turns out they don’t need lapping.

After calculating eye relief for the to-be host rifle, the scope was leveled in the mount, and a dot of blue Loctite (“242”) was added to each screw before they were tightened in the rings to the recommended 18-inch/pound specification.

With the Riton RT-S Mod 3 scope properly mounted to the RT-M Precision QD mount, they were released from The Device and waited to be mated with the host firearm. 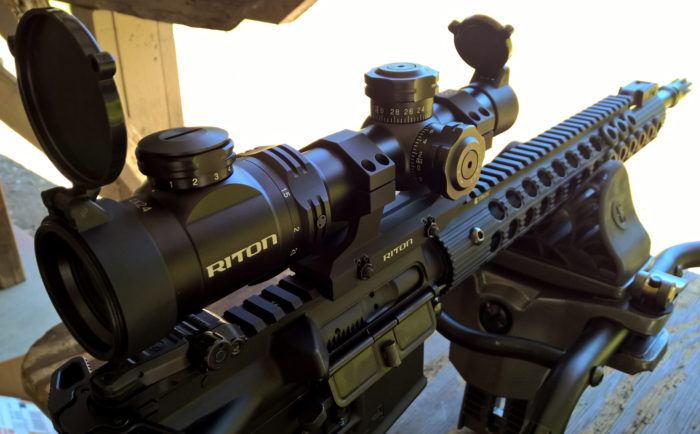 At the range I stuck a 16″ Troy MSR chambered in 5.56 NATO onto a Caldwell Stinger, leveled the top receiver, and easily mounted the Riton RT-S Mod 3 Gen2 1-4x24IR scope to the rifle using the pre-mounted RT-M Precision QD mount.

A quick double-check that the scope was level to the firearm’s top receiver proved the cross-deck was successful. Zeroing the scope and general shooting commenced with enthusiasm. The Riton optic has been extremely enjoyable to shoot; my favorite routine now being alternating shots between picking off bits of clay target on the 50-yard berms and ringing steel plates at 200-yards at 4x magnification. It is just too easy with this set up, even in low light.

And after about a thousand rounds on the mount/optic, two significantly hard impacts to the scope and mount, and a dozen transportations, the scope held zero perfectly and earned a reputation for reliability. That great experience would not have been possible with a mediocre mount; Riton’s Precision QD mount performed its duties very well.

Furthermore, I found that removing and then reinstalling the mount/optic from the rifle had no real measurable effect. As long as the mount was indexed into the correct rail slot, pushed to the front of the slot, and locked into place methodically, it held zero. My experiences with Riton Optic’s products this year have been great and the positive trend continues with their RT-M Precision QD Mount (30mm/1″). Although the mount is manufactured overseas, I found it to be nearly flawless in the field. It is robust, can take a beating, and holds zero if properly removed and re-mounted, which is extremely easy with their locking QD lever system.

The RT-M Precision QD mount’s does feature 1-inch ring inserts to accommodate scopes with 1-inch tubes, however, this feature was not thoroughly tested and to be quite frank if I had a 1-inch tube scope I would be inclined to use a dedicated mount. However, the option to use the mount with either tube size is a unique value-add.

Quality: * * * *
The RT-M Precision QD mount doesn’t have quite the top-notch level of quality we are used to seeing from USA-made mounts, but it is darn close. The components are machined nicely, the parts fit together well, and the unit is finished in a dark, even black anodizing. The hardware and lever components are good-quality.

Durability: * * * *
Riton’s RT-M mount is made for tactical and hunting platforms that will see use in the field. I banged-up the mount and scope a bit and they held zero without issue. The mount is quite rugged.

Repeatability: * * * *
Over the course of several months of shooting, and a few impacts, the mount held the scope in place without fault and zero was retained. Even breaking zero purposefully by removing and reinstalling the scope/mount did not result in a shift in point of impact.

Overall: * * * *
Riton Optic’s RT-M Precision QD Scope Mount, designed for tactical and hunting situations, is a solid mounting system that is easy to install, easy to adjust, and easy to remove. It performs very well and helps hold the optics’ zero, even if the ride gets a little bumpy. The RT-M QD Precision mount is a great mid-priced solution, especially if you need a set up you can remove and reinstall over and over again without losing zero.