There are lights you can put on your rifle and then there are rifle lights. Illumination tools purpose-built for hard use conditions in the worst conditions and in extended use on hard-recoiling guns. The new Colt Microtac M-Scepter 400 is unquestionably a light that qualifies as a hard use, heavy duty weapon light. Most lights shooters put on their AR or other rifle are consumer grade flashlights. They’ll do fine on an Airsoft gun or .22 and crank out some lumens, but they just aren’t built to take hard use, let alone the kind of abuse and round counts you’ll run in a weekend of hard training. Or even many spirited hog hunts. So when Colt decided to get into the weapon light business, lumen output and a cheap price weren’t the goals. They set out to build a battle-proof light that soldiers and heavy-use consumers can rely on to work under the most demanding conditions. That all starts with the Microtac M-Scepter 400‘s LED. Colt uses a variety of CREE emitter…one they won’t ID for competitive reasons. It’s much more robust than those used in pocket flashlights and ensures uber-reliabilty as well as consistency in beam color and performance. In other words, this isn’t one of those ‘as seen on TV’ lights that’s available now for the low, low price of $19.95…if you act now!!

As for physical durability, the Microtac is rated for 35,000 rounds of 5.56 fire in either semi- or full-auto. That’s the kind of bone-jarring use that would reduce a bargain light to a quivering pile of parts. 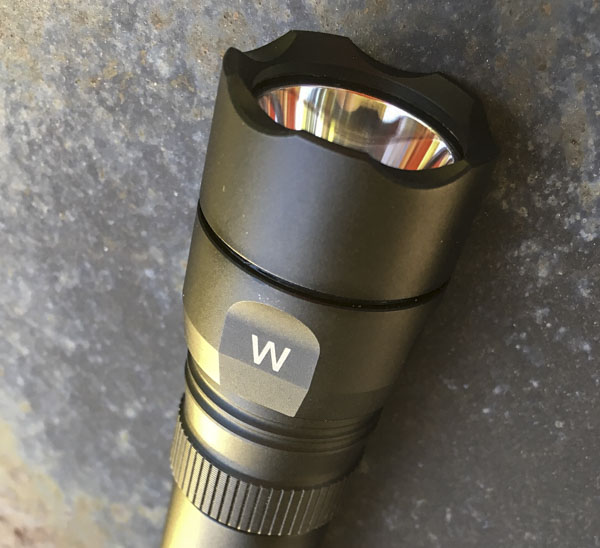 The W stand for white light. Colt will be adding different color and infrared option to the line.

The design is unique, too. It’s a modular, reversible design made of heavy aircraft aluminum that gives you a variety of options in configuring and mounting the Microtac. The M-Scepter is comprised of four main component parts; the beefy Picatinny mount, a body section (basically a battery tube), the tail end switch and the reflector/LED head. These parts mix and match and are reversible. That means if you want to use it in its full-length, two-coppertop configuration on the left side of your rifle, you mount it as seen above. Want something shorter and lighter? No problemo. Just unscrew the middle body section and remove it. That cuts down the length and weight and allows you to run a more compact unit on a single AA battery.

If you like your light on the left site of your AR, just screw the end cap/switch section on the opposite side of the mount and attach the emitter to the other end. It makes for an easy-peasy, flexible plug-and-play design. Those Colt blue dual o-rings at each joint mean the Microtac is ultra-insulated to keep out dust, dirt, sand and water. I turned mine on and dropped it in a pan of water. When I came back about a half hour later, it was still shining and the internals were dry as a bone. The Picatinny mount is extremely solid with two heavy-duty knurled screws to affix the M-Scepter to a section of rail. The solidly built tail end has a simple, rubber-covered on/0ff switch as well as a rubber-covered remote switch input (remote sold separately). Colt’s MSSRT-SWT switch hasn’t hit the market yet, but will sell for $79 when it does. The M-Scepter’s rated to throw its beam for 650 yards thanks to its highly polished reflector. Rather than a mirrored piece of molded plastic, the Microtac’s reflector is machined from a solid bar of aluminum and then “silver”-coated to improve service life and performance.

Which brings us to cost. The M-Scepter sells for $259, not an insignificant amount of cash. And if you’re comparing it to those Airsoft-grade lights you can buy for less than one fifth the price, Colt’s new offering probably won’t look very compelling. 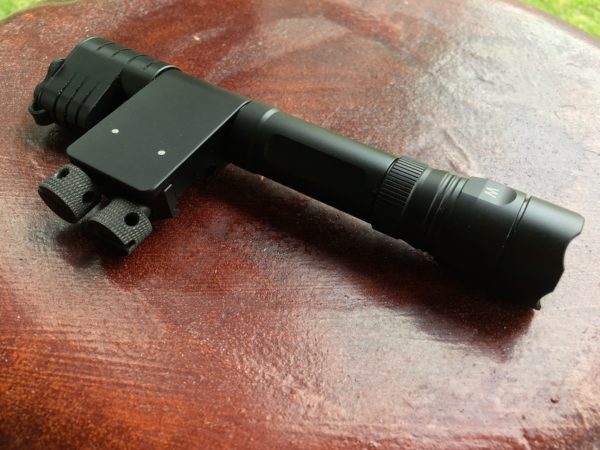 But for a meaningful comparison, you have to look at other weapon lights meant for use in battle conditions. Comparable lights from makers like Surefire or Steiner cost more for fewer lumens without the modularity. Colt’s also opted for AA batteries in the Microtec (and managed to generate a remarkable 400 lumens from them), rather than the more expensive, harder-to-find CR123 batteries (that generate twice the voltage) used by other lights with longer rated run times.

The upside is you’ll be able to find batteries for your rifle light virtually anywhere on the globe, even in a SHTF or TEOTWAWKI situation. And even if you can only manage to scrounge one measly AA, the Microtac can easily be configured to work that way. So on an apples-to-apples basis, the Microtac is extremely competitive.

There are weapon lights out there with a few more features. And there are definitely less expensive options. But the Microtec M-Scepter is purpose-built to a higher standard to serve those who put their lights (and their rifles) through the toughest tests in the worst conditions. The M-Scepter is built like a brick lighthouse and flexibly designed for a variety of mounting positions. It’s definitely worth your consideration when kitting out your favorite rifle.

Ergonomics: * * * * *
The simple on/off rubber switch is right where it should be and as easy as it gets. The multiple mounting options make it work for virtually any rifle and shooter.

Function and Build Quality: * * * *
Tough as year-old beef jerky, the Microtac M-Scepter is built to take a licking and keep on emitting. Some may want more brightness options (and maybe a strobe), but when push comes to shove, simple is usually better. And you can add a remote switch to it if you want.

Value * * * *
When you compare it to similarly built rifle lights the Microtac gives you all the toughness and performance you need at a competitive price.

Overall: * * * *
This isn’t a dual-use light. You won’t be EDC’ing it in your 5.11’s. The Microtac M-Scepter is built as a rifle light and it excels at its one job. No variable brightness, no strobe. It fires an amazing 400 lumens from two common AA’s. It ain’t cheap (in terms of price or build quality). But if you want a rifle light that will take whatever you throw at it and keep on shining, the Colt Microtac fills the bill.