My original “home build/ghost gun” AKM-47 now has over 10,000 rounds through it in just over a year. Not bad for a weekend garage build using scrap metal and spare parts. Even better than not bad is the trigger. The original Tapco trigger — which wasn’t bad at all when it started, now feels great. And that’s great by any standard, not just “great for an AK.”

Smooth as silk, it was breaking at about three pounds. Everyone, even real “Kalashlife” folks were impressed with it. And then, well, all good things must come to an end. At a range session, the trigger failed to reset. A few more rounds out, and then it kind of reset, released, reset, and released…really really fast. Yup, it was running two- and three-round bursts. My super awesome ghost gun had became a felony. Even worse, it was no longer a reliable hunting rifle.

After yanking the old trigger group, I set to looking at my options. That’s how I came across the CMC trigger. I like the CMC trigger for my AR. It has a single stage flat shoe feel, similar to my Elfmann triggers.But my CMC has proven far more reliable. And they make an AK Elite trigger with a similar flat shoe. The CMC AK Elite trigger bills itself as “easy to install.” Easy is a relative term, and a quick ask of AK aficionados confirmed my suspicions after looking at the design. This is actually one of the most difficult triggers to install. In fact, it was far more difficult than the original Tapco trigger. It is also roughly $140 more. Then again, my Tapco trigger is a walking felony now, so maybe you get what you pay for.

Before getting into the build, I was strongly advised that YouTube was my friend when it came to installing this trigger. But while YouTube provided no help at all, the instructions provided with the trigger proved immensely helpful.

Before I explain the hard parts of the instillation, a note about AK and AKM rifles . There’s nothing even remotely close to the same standards of building on an AK pattern rifle as there is an AR. There are probably a hundred different version of the gun out there, and it’s not just the furniture. Receivers have slightly different, but meaningful changes. Some stocks require reinforcement to the receiver, and some don’t.

Home builds, like mine, are the absolute worst, since novice builders make all sorts of minor mistakes, slightly altering the geometry of the gun. That makes a “drop in” anything on an AK often not drop in at all. I say that to make sure you take my difficulties in installing this trigger with a grain of salt.

The first problem I had right off the bat . . . The flat base of the trigger group wouldn’t seat against the floor of my receiver, since one of the rivets on the bottom of my reiciever stuck out just a little too much for the trigger group to sit flush. I can’t really cut the rivets, so five minutes in, my $180 trigger is getting the business from the angle grinder.

Following the directions, the next part, putting the two pieces of the trigger back together, was simple and straightforward. Installing the safety revealed the next complication. The new trigger sat higher in the receiver, so the bottom edge of the safety had to be filed down. Not a big deal…I had to file it to fit the Tapco trigger as well. Once I got it short enough and installed, I brought the hammer back, and there was my big problem. The old safety was cut too wide for the new, narrower hammer of the CMC trigger. The hammer simply passed right by the safety, never engaging it at all.

Instead of going through the ridiculous effort of welding together a new safety, I called up the Dead Goose Society and ordered a new one. I waited a few days and drank some Stolichnaya while I waited, you know, just to keep the mood. With the wait over, the new safety dropped right in. The same filing had to be done on the bottom of the metal, just a couple of passes with a file, then a check until it just barely fit. With that, at least my safety troubles were over.

A problem many people cited online —  but one I had no problem with — was installing the small set screws to keep the trigger group seated and in place in the receiver. Those were easy to reach and went right in. They did, however, slightly raise the base of the assembly, so a little more of the safety had to be shaved again.

The only thing left to do was add the two long bars that further assured the trigger and hammer assembly would be retained in the receiver. Everyone I read online said that it was next to impossible. The instructions said “with a flat head screwdriver…”, and no. Stop right there.

The idea is that you are to weave this small metal rod under and over the rivets inside the receiver, all after everything is installed. I think this would be extremely difficult on most AKs. Fortunately, it was completely impossible. My rivets were set too low into the receiver, and there simply wasn’t enough space for the bars to go under them. I actually don’t think these bars are even needed, but no matter, the original Tapco trigger retaining bar still fit and worked just as well. After a quick function check, the trigger was installed and it was time to get to the range. Just so none of you think that was too much time to spend on an AK, other than the wait for the new safety, the total time of installation was just about 40 minutes. What was the result of all of that? A very good trigger. The final trigger pull weighs right in at the advertised 3.5 lbs, lighter than most traditional AK triggers, and just a tad lighter than original Tapco trigger I installed when I built the rifle.

The flat trigger shoe is the same as I’ve grown to love on my ARs, but I was a bit disappointed in the feel of the pull. It’s hard to describe. There’s no grit at all, but the pull itself kind of slides until a slightly squishy release. To be fair, I’m really nitpicking here. The trigger is far better than “mil spec” — whatever that means for an AK — but that final squish, instead of a sharp release just doesn’t feel quite right.

The reset, however, feels just right. Very easy to feel, or “positive” in the trigger lingo, loud, and then pulls to release much more crisply than the initial pull. For those of you familiar with their AR triggers, I installed a similar CMC AR15 trigger (in about 10 minutes) on one of my AR15s. The release feels the same, but there is more take-up and not quite as crisp of a release on the AK model compared to the AR. The AK trigger design is what it is, and I guess there’s only so good you can make it. 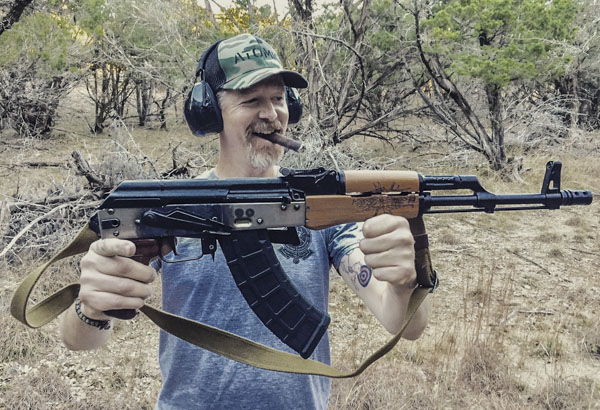 I’ve run 300 rounds through it so far with no malfunctions of any kind and no noticeable wear or shifting on the trigger assembly. The trigger didn’t enhance my accuracy from the previous trigger, at least when the previous Tapco trigger wasn’t running. It did, thankfully, fire only one round when depressed, and reliably reset for the next loaded round. Mission accomplished.

Overall * * * *
The trigger is very good, if comparing it to the Jewell triggers on some of my bolt guns. It’s amazing for an AK. Plus, now my truck gun is no longer illegal (other than in the usual states). Caveat emptor: it was by no means a “drop-in” installation on my rifle, and is much more difficult to install than other AK pattern trigger assemblies.