Slings serve four purposes: they stabilize your rifle when shooting, retain it when you need to  go “hands-on” or transition to your pistol, and help you carry it comfortably. A few months ago, Blue Force Gear sent me the Vickers Combat Application Sling in black and coyote, the same sling with a shoulder pad, and the Vickers 221 Sling in multicam. Missions accomplished? I started with the Vickers 221 sling, mounting it on the PWS MK1 Mod II rifle‘s built-in QD (quick detach) mounts.

Some people like to attach their sling to their rifle’s lower receiver or in a single point configuration (a good idea for sub-guns). To convert the 221, you simply attach the front QD mount to the sling’s rear mounted socket. I prefer to attach my sling to the rifle’s buttstock and hand guard. It prevents entanglement and puts the rifle in an advantageous position for quick and efficient transition to pistol work or hands-on close-quarters combat. 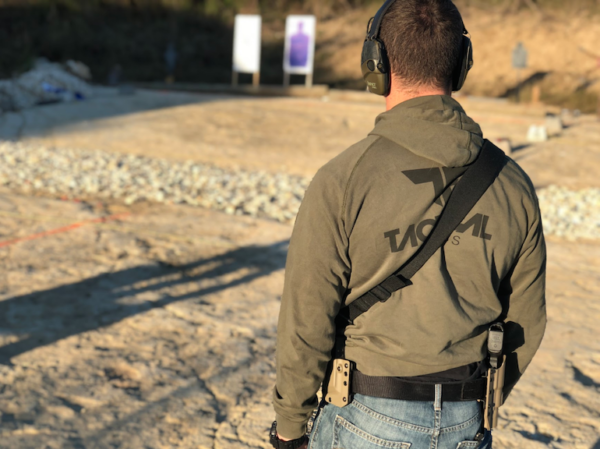 To mount the Vickers Combat Application slings I pulled-out my old school 14.5″ pinned AR15 with its stock metal mounting loops on the butt stock and front sight post. To attach the sling, I removed the strap from its adjustment triglide, strung it through the mount and and looped it back through the loop. On the back end, I had to remove the triglide, pull the strap through and then thread it back through the triglide. (You can easily attach QD mounts to the ends of the sling for rifles that contain QD sockets.) The black version of the Vickers Combat Application sling has a 2″ wide shoulder pad made from tubular webbing with closed cell foam padding.

Initially, I didn’t feel the difference between the padded and unpadded slings. After several hours of shooting and carrying the rifle around the range, the extra shoulder cushion was much appreciated. I could see it being very useful in longer applications.

All three slings are 1.25 inches wide and made from “Invista solution dyed CORDURA® webbing.” All three feature the “Patented Quick Adjuster with Contrasting Pull Tab.”

The pull tab was easy to adjust and moved smoothly. The only feature missing: a loop design tab to make it easier to hook and adjust the sling with a thumb. To test adjustability, I ran a V-Tac barricade drill, constantly switching to support side as well as shooting from odd positions.

All three slings were very easy to adjust, tighten and switch from dominant to support side. The adjustment tab came in extra handy in stabilization when shooting from an odd position, especially through the narrow and horizontal slits of the barricade. On transition drills from pistol to rifle, when the slings were in the tightened position (where they should be when you are shooting), they helped the rifle stay out of the way.

I repeated the drills in single point configuration with the Vickers 221 sling on the full size PWS MK1 MOD 2. As expected the rifle went into a place I’d rather not mention here.

The Blue Force Gear Vickers slings accomplished their four tasks and then some. The Vickers 221 was my favorite due to its QD mounting system, which made it extremely easy to configure and move between platforms.

Reliability * * * * *
No issues with adjustment or mounting.

Comfort * * * * *
The padded option adds comfort over an extended period of time.

Aesthetics * * * * *
The slings come in multiple colors to match your rifle and gear.

Ergonomics * * * *
The adjustment tab allows for easy adjustment but an open loop would have allowed for adjustment with the thumb.

Overall * * * * *
The Vickers 221 sling was my favorite due to its easy mounting and configuring, but all slings preformed as advertised.