Correlation does not equal causation.

Many factors affect who shoots whom, when, where and why. For example, you can correlate the  frequency of Chicago gangland firearms-related homicides with the state of war between rival gangs. Police “sweeps” of gang members also has an impact. As does the weather.

More than a dozen guns came from officers following up on leads from gunshots fired on New Year’s Eve. The chief says already homicides are down because of the recent effort.

Already this year, homicides in Fresno are down 50-percent. No coincidence according to Dyer but rather enforcement related.

As the Brits would say, Chief Dyer is playing silly buggers. Given Fresno’s annual homicide rate — 40 – 50 per year – a fifty percent drop over one month in homicides could mean a drop from four homicides to two. Or two to one. 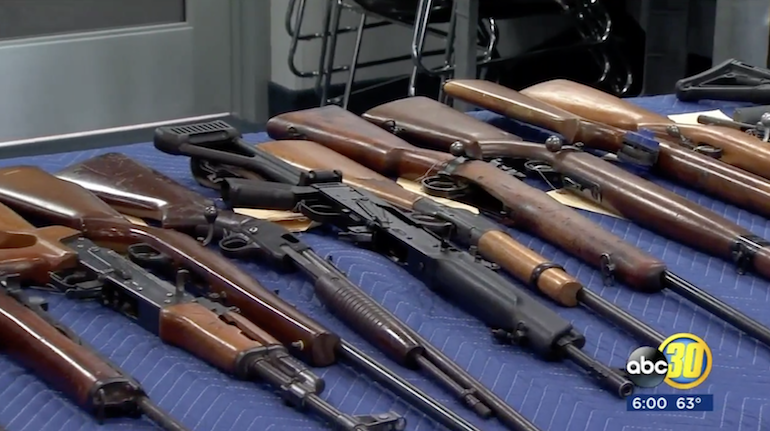 If we’re looking to isolate the “guns on the street variable,” it would be nice to know how many guns are “on the street” and how many the cops confiscated compared to that same one month time period in 2017.

Come to think of it, “homicides” doesn’t necessarily mean firearms-related homicides does it?

Are we sure this story is legit? Are we sure that the guns on display were all confiscated in 2018? Were all of them taken from criminals?

The chief’s media cheerleader is payingy no attention to the reality behind that curtain. They’re happy just watching the Chief pick up his crayons and connect the dubious dots. Like this:

“There’s an enormous amount of shootings that are occurring in our city with the same firearm. Meaning that firearm is either being passed around amongst gang members, which we know occurs, or one individual using a firearm is committing multiple shootings,” Dyer said . . .

Officers are using old-school police tactics and modern day technology to lead them to non-law-abiding gun holders. It’s a commitment Dyer says will be yearlong.

Shootings are down significantly from the same time last year. Officers have also arrested several gang members who are unlawfully in possession of guns.

An “enormous amount” of shootings being . . .? And you’d kinda hope that the Chief’s minions could figure out if there’s a multiple murderer on the loose without having to examine firearms confiscated after celebratory gunfire. I wonder if shooting a fellow gang bangers in Fresno is as easy as shooting holes in Chief Dyer’s “We Got Guns Off the Street!” PR campaign. And guess what? The Chief promises more of the same.

Officers are using old-school police tactics and modern day technology to lead them to non-law-abiding gun holders. It’s a commitment Dyer says will be yearlong.