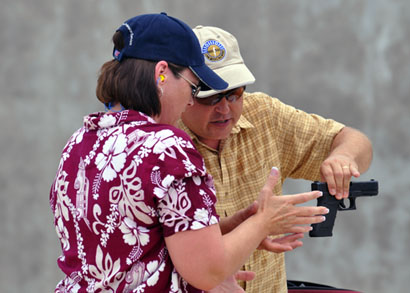 Hopefully, you’ve been keeping up with my First Time CHL series. I’ve really enjoyed writing it and while progress has been maddeningly slow, it has been a fun journey. I want to quickly thank all of our readers. The four articles in the series have had over 200 comments. Wow . . .

One of the most prolific sources of comments in my inbox has been Karl Rehn from KR Training. After my first article went up, Karl and I made contact about attending some training classes. I’m a pretty decent “stand at the line, shoot paper, and burn through ammo” shooter. Unfortunately, that’s where the good shooting ends. I don’t know the first thing about drawing from concealment, shooting on the move, or even picking a good holster. Thankfully, Karl has offered to lend me a hand on all those topics as well as some others.

KR offers classes that run the entire gamut from total noob to experienced shooter. Please take the opportunity to read through his site. It’s filled with informative articles about handgun selection, training tips, and other food for thought topics. In all my dealings over the last few weeks with Karl, it has become incredibly apparent that Karl really and truly cares about the success of his students.

So I’m headed out to Karl’s private outdoor range on Saturday for his Defensive Pistol 1 class. And boy am I really, really, really excited about the whole thing. Expect a full review of my class and time spent with Karl. In the interim, I want to leave you with this little nugget from KR’s state goals and objectives.

We want our CHL students to have the best possible chances of surviving a violent attack. That means more than just “having a gun” and making a “C-” on the CHL written and shooting tests. In the CHL test you get to start with the gun in your hand, standing still, shooting a giant stationary target in good light with generous time limits. Data on real incidents shows that the most likely scenario is that you will start with your gun holstered and concealed, have very little time, dim light, and you may face more than one attacker who will be attempting to cause you serious bodily injury or death. This is why we offer many training courses that go beyond the state-mandated CHL course, including classes that teach non-shooting (but very important self-defense) skills such as awareness, communication, tactics, unarmed defense and more. The CHL course is a first step down the path, not the destination.

Our goal is to teach students what they actually need to know to make a smart handgun selection, to shoot fast and accurate, and to make legally justifiable and tactically correct decisions about what actions to take in a life-threatening situation.

Wish me luck. We’re going to learn some stuff.