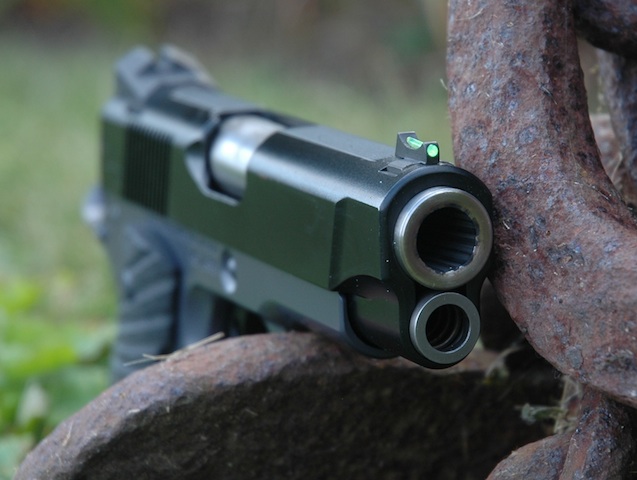 With all the talk of universal background checks (and the never-mentioned gun registration that would be required to enforce it), I decided it was time to make sure I had some firepower that couldn’t be traced back to me. Yes, that’s right, I decided to exploit the gun show loophole to get me a 1911 [not shown]. My first step was to go take out some cash. Clearly you can’t use credit cards for this sort of thing, so cash is really the only way to go. A couple of trips to the ATM later, I had a cool grand in Benjamins stuffed into my pocket, and I headed for the local gun show . . .

I live in Washington State, and the big twice-monthly gun show there is run by the Washington Arms Collectors at the fairgrounds in Puyallup and Monroe, alternately. The first thing you need to do is get INTO the show, which costs you $9. You also need to disarm completely, because loaded/unziptied weapons aren’t allowed in the show at all, nor are loaded magazines. So everyone with a cary gun probably leaves it in the giant, open, unpatrolled parking lots and walks around with wads of cash on them. Because safety.

Anyway, $9 will get you in the show, but to purchase a firearm there, you have to be a member, which is about $35 per calendar year (that is to say, if you become a member in November, you have two months before you have to renew.) In order to be a member, you also have to pass a background check, and you won’t get your badge until it’s complete. I’m cool, though, because I got my membership a couple months ago, so I’m all set.

I walk around the show and quickly find the very model 1911 that I came for at a price only slightly above what would be considered the going retail price. Many people think there are cheap guns at shows, but I haven’t seen them. Mostly it’s about selection, and not having to pay transfer and shipping fees on a gun you’ve never even laid eyes on. So I expected to pay a little more than what you see them for on Gunbroker, which would require shipping and transfer fees (and a background check) to get.

I tell the fine merchant that I would like to purchase the 1911. They ask to see my WAC card (which I give them) and my CPL (which I also provide). Oh, I forgot to mention – if you don’t have a CPL in Washington, there’s a five day wait. Since this is a two day gun show, that five days would turn into two months (because there’s no WAC show next month, for whatever reason). Alternately, I could wait a week and then drive the 530 mile round trip across the state to pick it up, but with the price of gas, I’ll just use my CPL.

“How do I get a CPL?” I hear you ask. Well, that’s pretty simple. Washington is a shall-issue state, so they have to issue you a license unless there’s a reason they shouldn’t. So you go down to your local police station with your photo ID, fill out the application, pay the $52.50 fee, and then wait 30 days for your background check to clear. They’ll even mail your card to you.

Back at the table, though, they have my photo ID, my CPL, and my cash. Now it’s time for a NICS check. I fill out the standard ATF Form 4473 that you have to do at any gun store, which they then transcribe into their computer for an online NICS check. It’s quick and simple and quite probably entirely logged and recorded, because thats how computers work.

Having now paid for the gun, the WAC card, the CPL, and sales tax, and having submitted to three different background checks in the process, I’m done. It’s quite literally that easy to buy a gun at a gun show. It seems unlikely to me at this point, but everybody knows that guns bought at gun shows are untraceable, off the books. I’m comforted by that thought, because now no one will know about my secret, hard-to-find 1911.