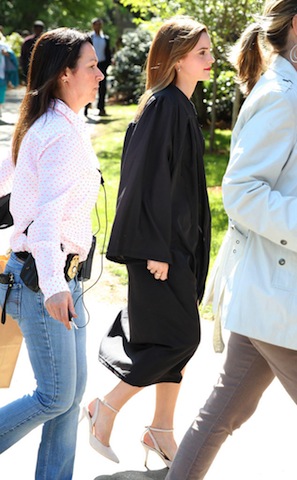 NOTE: This story has been updated.

Brown University is a “gun-free” zone. Unless you’re an active, sworn police officer you’re not allowed to carry a firearm on campus. Which isn’t a problem here, right? ‘Cause the above graduation day picture shows actress Emma Watson (alias Hermione Jean Weasley née Granger) on Brown’s quad with a cop. Only Providence PD and Brown both said the bodyguard isn’t one of theirs. In fact, the blue jean bodyguard is a retired New York Detective. And that makes her a cop who’s breaking the law . . .

RI doesn’t recognize any other state’s concealed carry permit. So there’s only two ways a New York cop can carry in RI. One, if she has a RI concealed weapons permit. Or two, under the terms of the Law Enforcement Officers Safety Act (a.k.a., LEOSA). As a retired NYPD dick, Emma’s bodyguard qualifies for LEOSA. BUT the Act specifically states that out-of-state police may only carry outside their jurisdiction concealed. Says so right here [via the NRA]:

(a) Notwithstanding any other provision of the law of any State or any political subdivision thereof, an individual who is a qualified law enforcement officer and who is carrying the identification required by subsection (d) may carry a concealed firearm that has been shipped or transported in interstate or foreign commerce, subject to subsection (b).

Emphasis added. So even though RI has open carry for Ocean state weapons permit holders, a LEOSA cop doesn’t qualify.

What’s more, a LEOSA cop doesn’t get a free ride on the Gun Free School Zones Act, under which Brown University maintains its blanket ban on non-active law enforcement firearms of any kind. To get around that a LEOSA cop would have to have an RI permit AND get permission from the University.

As for the “meaning” of this law-breaking bodyguard action, downtrend.com sees it this way . . .

One of two things is going on here. Either Brown approved this armed presence and they don’t want to seem like hypocrites or they found out about it later and don’t want to take action against such a famous graduate. Either way, this is elitism at its finest. There’s one rule for regular schlubs and another for rich and important people . . .

A famous person shows up with an armed guard, just for personal protection, and it’s like nothing ever happened. The gun-free zone only applies to those not fortunate enough to have been born into money or who have never starred in a string of blockbuster movies.

Maybe we should reframe the gun control debate as class warfare. It is the rich elites on the left that are trying to disarm the American people. All the while, they enjoy armed protection and privileges that most people can’t afford. The way regular people defend themselves is through gun ownership and the ability to carry their weapons.

One more thing: even if it was OK for Watson’s bodyguard to open carry it’s extremely ill-advised. Talk about shoot-me-first. Which goes to show even at Brown, you can’t fix stupid.