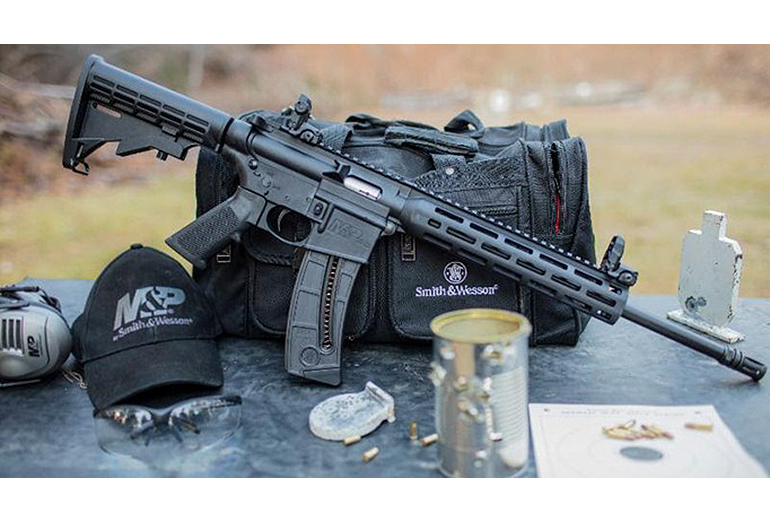 The reigning title-holder for the dumbest “I shot an ‘assault rifle’ and OMG!” story by a journalist is held by the New York Daily News’ Gersh Kuntzman. It’s a title he probably won’t give up any time soon. To Matthew Albright’s credit, unlike his laughably sissified New York colleague, he wasn’t moved to near-tears by the experience of pulling the trigger on a scary black rifle. Then again, to be fair, the Delaware Online scribe was putting rounds downrange with an ultra-tame Smith & Wesson M&P 15-22, so there’s that.

Anyway, the Delaware general assembly is currently considering an “assault weapons” ban bill, SB 163. Because guns. And because they think they can get away with it, electorally. So Albright visited the Delaware Rifle and Pistol Club to actually try one himself.

You know how you change the mind of an anti-gunner? Take him or her to the range.

There is a trance-like feeling to concentrating utterly on a target, focusing on the minute muscle movements that separate a hit from a miss. I can quickly understand the appeal of sport-shooting.

More profoundly, holding this firearm is immensely empowering. I understand how it would give its owner a sense of strength in protecting himself and his family.

Shooting this gun, I soon get why gun owners are winning the battle over so-called “assault weapons” in Delaware.

Did he say winning? Why yes. To Delaware gun owners’ credit,

Even as the General Assembly makes bipartisan progress on other gun safety legislation, it hasn’t even been able to get SB 163 out of its first committee. The reason is simple: At the grass-roots level, opponents of an assault weapons ban have turned out in far greater numbers and with far greater fervor than proponents.

I don’t care how many national polls you show a state senator, they’re going to listen to what they hear directly from constituents. And, from what I hear, lawmakers are getting way more emails and phone calls from opponents of SB 163 than from supporters.

Delaware Rifle and Pistol Club president Jim Bowman did a good job of showing Mr. Albright the ropes. It obviously made an impression.

A supporter of an assault weapons ban can think these guns are unnecessary, but a gun owner has felt the kick of the stock into the shoulder, has held its re-assuring weight in his or her arms.

A gun control advocate can believe nobody should have magazines with more than ten bullets, but a gun owner knows how hard it is to hit a moving target in broad daylight, let alone in the dark while your fight-or-flight instinct is in high gear.

Of course there are some gun owners and even ex-soldiers who support SB 163. But, by and large, most who support the ban have never touched the guns they want to ban.

A surprisingly balanced view from the state’s biggest news daily. Albright goes on to note that so-called assault rifles are virtually never used in the commission of crimes in The First State. And he was duly impressed by the degree to which safety was important to the shooters he saw at the range that day.

Visiting the Rifle and Pistol Club also reminded me just how obsessively cautious most gun owners with their firearms. Even when backing up only a few meters to a new shooting position, Bowman and Boyce removed the magazines from their guns, put flags in the chambers and put everything back in their cases.

If my finger moved to the trigger unconsciously, or if my gun dipped down away from the target, even for a moment, they would immediately correct me. Joining their club requires an eight-hour training course and a grueling 3-hour qualifying test, and I could fill a column listing the safety measures it employs.

Is it any wonder that responsible gun owners like these would bristle at the notion they can’t be trusted with these firearms?

Delawareans can only hope that Albright has a good bead on the ban’s chances of passage.

One thing is clear to me: Second Amendment rights are far more than an abstract concept to those who defend them. And I have a hard time seeing how (SB 163) supporters are going to get around that.