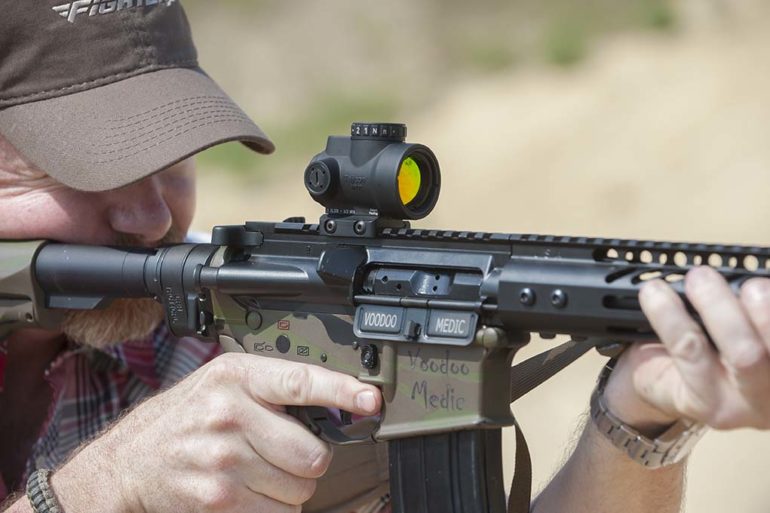 As we learned from the 1953 movie Shane, “A gun is a tool… no better and no worse than any other tool – an axe, a shovel, or anything. A gun is as good or as bad as the man using it.” These ten AR-15 self defense stories are prime examples of times when the notorious black rifle was used by lawful gun owners to save innocent American lives.

A 15-year-old girl was rafting in a creek in the Ocala National Forest (Lake County, Florida) when she was chased up a tree by an alligator. Yes, really.

“My daughter’s stuck in a frickin’ tree and there’s gators surrounding her!” the teenager’s mother said frantically to a 911 operator. “Oh my God! Please hurry! Please hurry!”

Clinging to a branch for dear life, the girl awaited rescue for more than 30 minutes with the alligator hissing hungrily underneath. Finally, her hero, Deputy Mitch Blackmon, arrived. He found the girl in the tree screaming that she was tired from hanging on to the branch, the report said.

“My presence failed to scare the alligator away, and it began encroaching on my area,” wrote Blackmon, “at which time I fired one single 223 round from my Bushmaster AR15, killing the alligator.”

2. A guy with an AR-15 defended himself and three others from a gang of seven masked and armed criminals (2018)

In Glen St. Mary, Florida, a group of seven masked home invaders with guns broke into a home with four occupants. After a shot was fired by one of the invaders, two of the residents defended the home with deadly force. One of them had an AR-15 and reported that he had to fire upwards of 30 rounds before the threat ceased. This led to the death of one of the home invaders and the arrest of five others.

In Oswego, Illinois, Dave Thomas (who just so happened to be an NRA concealed carry instructor) saw a pool of blood in the hallway of his apartment building. He quickly grabbed his AR-15 and followed the sound of the attack to find his 22-year-old male neighbor in the process of viciously stabbing another one of his neighbors, a 28-year-old man. Thomas instantly stopped the attack with, according to reports, “only a threat of force.” Thomas then used his tourniquet to help keep his neighbor alive until he could get to a hospital. The victim survived the attack thanks to Thomas’ intervention.

When he was asked why he brandished his AR-15 rather than the handgun which he was also carrying, Thomas said in a video interview:

“Bigger gun, I think a little more of an intimidation factor. Our main goal is public safety, we don’t ever want to take a life. I definitely think the intimidation factor, that AR-15 made him think twice, and in fact, he finally did drop the knife then.”

Residents of a Hawaii home decided to break the mold in their extremely anti-gun state by owning an AR-15. That decision ended up working out in their favor when three hooded criminals brandishing a shiny handgun invaded their home. Having forced one of the residents into a bathroom, the invaders proceeded to walk around the home and steal valuables while a second resident grabbed his AR-15 and fired one round at the robbers. He missed, but the suspects ran off, firing the handgun four times as they fled. None of the victims were injured during this incident.

Over 40 rounds were exchanged during this drive-by shooting in Houston, Texas – but not even one of those rounds hit the intended target. Instead, the would-be victim defended himself against all three assailants by firing his AR-15 into their vehicle, killing two and severely wounding the third. No one else was harmed during the incident.

6. An NRA Member with an AR-15 chased and shot down the Sutherland Springs shooter (2017)

Hearing what sounded like gunfire at the nearby First Baptist Church in Sutherland Springs, Texas, a young woman stopped washing dishes and ran to get her dad. Her dad was Stephen Willeford, a former NRA instructor, who immediately grabbed his AR-15 from the safe, hurriedly loaded a magazine with an unknown number of rounds, and ran to the church with his rifle.

As Willeford approached the church, shoeless and yelling at the top of his lungs, the bad guy walked outside and engaged him in a gunfight before fleeing the scene in a vehicle. Although he had only two rounds left in his AR-15 magazine, Willeford didn’t stop there. He teamed up with a total stranger, and together the two men pursued the shooter in a high-speed car chase.  Eventually, the shooter collapsed, bleeding from two gunshot wounds inflicted by Willeford, shot himself in the head and finished the job.

By the way, historical data tells us that every time (not almost every time – every single time) armed citizens intervene during mass shootings, the attackers are stopped.

7. A teenager with an AR-15 defended himself from three armed home invaders (2017)

One day, three masked and armed high-school dropouts who’d taken up crime broke into the garage of a home in Broken Arrow, Oklahoma. They burglarized it, then returned to the home later that same day for another helping. The second time, they broke down the back door. With no family members around, the homeowner’s 19-year-old son, armed with an AR-15. All three intruders died on the property. This home defense gun use was found to be justified under Oklahoma’s Stand Your Ground law.

8. Black guys with an AR-15 (and other guns) stood guard outside a white friend’s small business in Ferguson, Missouri (2014) This story is solid proof that the United States is not what the mainstream media pretends it is. During the 2014 “race riots” (really just “riots”) in Ferguson, Missouri, almost every business in town was looted and trashed—every business but one. The safe haven was a Conoco convenience store and gas station operated by a white guy named Doug Merello. With an AR-15, a MAC-10, a Taurus 9mm, and a variety of other handguns, Merello’s friends (some former employees) defended his store until the violence subsided.

“He’s a nice dude. He’s helped us a lot,” explained one of the volunteers, who had lived near the store for most of his life.

A 15-year-old boy in Harris County, Texas, became a hero at a young age, making his dad (a deputy in the precinct) very proud. The boy and his little sister were home alone when two would-be burglars forced entry by breaking through the home’s window. In fear for his own life and his sister’s life, the teenager grabbed his dad’s AR-15 (incorrectly termed an “assault rifle” in the news) and shot at the attackers, who fled, leaving a trail of blood.

10. A man with an AR-15 defended himself and his wife from an assailant who forcibly followed them into their home (2013)

The husband and wife were talking near their apartment front door when they saw 32-year-old Jasper Brisbon, apparently on drugs, silently starting at them. The pair decided to go inside their home when Brisbon jumped between them and barged inside. The man grabbed his legally possessed AR-15 and commanded Brisbon to leave. Instead, the intruder approached him menacingly as the man yelled, “Stop! Stop! Stop!” When Brisbon still didn’t stop, the man fired one fatal shot into the stranger’s torso. It was later found the Brisbon had been awaiting trial at the time for an aggravated assault charge accrued a few months prior to his death.

So, next time someone you know questions the value of semiautomatic rifles for home defense, you’ve got some ammunition.