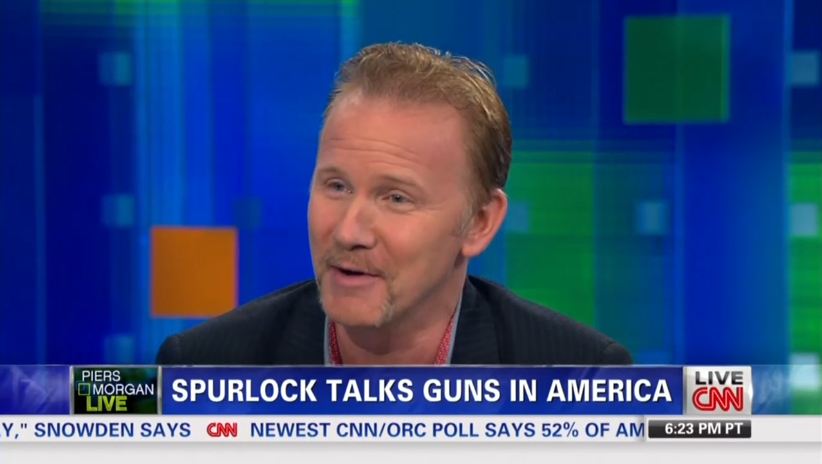 It appears that Piers Morgan will be getting some anti-gun assistance on CNN. Monday night he was joined by Morgan Spurlock, host of CNN’s upcoming series Inside Man, where he talked about his experience working in a Virginia gun shop for his new show.  While Spurlock admits he’s fired an AR-15, and that “they are fun to shoot,” he still advocates universal background checks, mag limits, a national gun owner database, tracking those with mental health problems and all the other things that the other Morgan wants too. It looks like CNN finally figured out Piers Morgan’s elitist snottiness and confrontational condescension turned off a lot of viewers so they’re trying a gentler, more moderate approach to get their anti-Second Amendment agenda across . . .

Scientific American is jumping on the anti-2A bandwagon too. Did you know that “People Kill with Guns More than Any Other Weapon”? That’s their latest big discovery. One commenter nailed it: “This just in, killers use the most effective tool available to kill with. If you managed to take remove all guns from an area, the headlines would read like this: ‘Gun violence plummets! In completely unrelated news, knife violence through the roof!'” It’s a real pity. I remember when Scientific American used to have scientifically well-reasoned and researched articles.

At the George Zimmerman trial jury selection, the prosecutor is asking prospective jurors questions like “Who here has a firearm?” “What kind?” “Where do you fire it?” “Where do you keep it?” The Orlando Sentinel has a video showing him in action. I’d be tossed out of that jury pool post haste, because I would tell him that it’s none of his damned business.

The Orlando Sentinel also lets us know that “TSA officers have stopped more armed passengers trying to board flights at Orlando International Airport than at any other Florida airport.” Last year, they seized 40 guns at Orlando. In comparison, the TSA says at Atlanta Hartsfield, the country’s busiest airport, they seized 97 last year while in Newyorkistan, they seized only one at JFK and three at LaGuardia. They don’t say how many weapons actually managed to make it through their checkpoints, though.

It looks like Texas Governor Rick Perry was just a little too late in his attempt last week to woo PTR Industries from Connecticut to the Lone Star State. Fox News is reporting that next week PTR will make a formal announcement that they will relocate to Horry County, South Carolina, near Myrtle Beach. They expect the relocation of the factory and the workers who will be making the move to take place over the next three years.

Gun owners came to the rescue of Nebraska Boy Scouts. The bullet shortage hit Camp Cornhusker and Scout leaders there were faced with the prospect of teaching about 1000 campers gun handling and shooting with BB guns instead of .22 rifles this summer. They put out a plea for donations, hoping to get 24K rounds to last the summer. Instead, gun owners from as far away as Florida donated over 65K rounds, enough to keep the camp in ammo for three years. Now, if any of you have any spare .22 long rifle, 9mm Luger, or .45 ACP that you’d like to donate to a worthy cause (i.e., the Frank Williams Target Practice Fund), let me know and I’ll send you my address.

In Jacksonville, Florida, six people were watching a movie at a friend’s home when someone kicked in the front door and ordered everyone to get on the ground.  No, it wasn’t another FBI raid gone wrong; this time it actually was a home invasion. The homeowner grabbed his 9mm and took action. “I look up and there’s a man on the ground and everyone else is on the ground doing the same thing I am, slowly looking up. To my amazement, my best friend Tommy saved our lives.” Tommy took out one intruder; police found a second body that “had been shot several times” a few miles away and think it could another of the bad guys. There had been a series of burglaries in the area recently, so Tommy’s quick thinking should make the neighborhood a little safer for everyone.

Bradley County, Tennessee, is considering allowing teachers to pack heat in the classroom. Legislation passed in the Volunteer State this spring allows some school employees to carry concealed weapons provided they have a carry permit, complete a school policing course, and have the superintendent’s permission. If the board approves, Bradly County will be the first school district in Tennessee to allow armed staff members.

Over at gunssavelives.com, they’re chortling “White House ‘Concedes Defeat’ on Gun Control.” Among other things, they’re citing the reluctance of supporters in Congress to resurrect the Toomey-Manchen bill, the recently-released White House report, the senate recall in Colorado, the lack of turnout at Obama’s Organize for Action rallies and the election of a Republican in Connecticut as proof that “it’s starting to seem that we have won this battle.” Personally I think they’re just laying low until the opportune moment (like another Sandy Hook) to strike again with full force. What do you think?