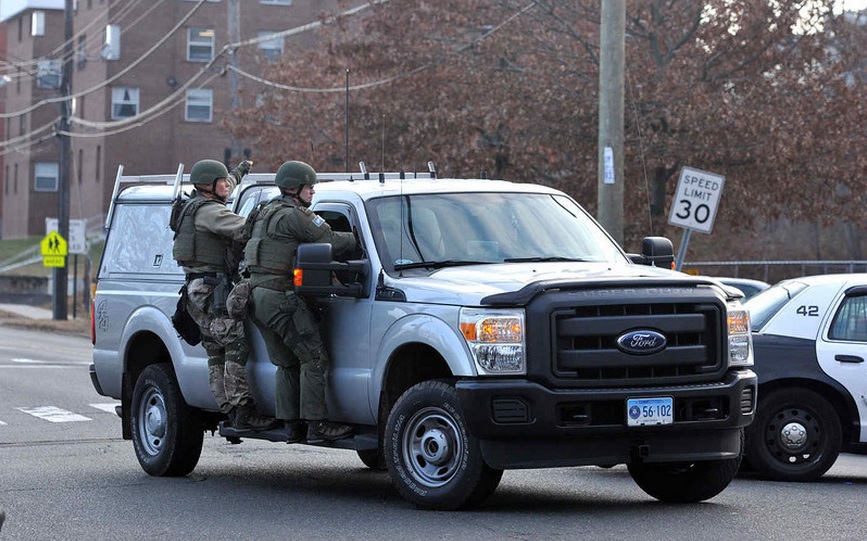 The headline over at bearingarms.com is Dong pinched by cops for having long gun near campus, and while that’s funny, it’s not the important part of the story. You see, a 911 call came in reporting a “man with a rifle,” a man that turned out to be William Dong. Police confronted Dong “within minutes” and arrested him, finding a couple more guns in his vehicle. He was arrested simply because someone saw the rifle, he had a valid handgun permit, and never threatened anyone. That’s still not the story. The story is (again, still) the dramatic overreaction by law enforcement. . .

For a guy who was confronted and arrested “within minutes,” dozens of officers from at least six agencies responded, along with cars, trucks, a mobile command center, and a Bearcat. Given the speed at which Dong was confronted, it’s possible he was in custody before some of those officers even finished strapping on all their tac gear. Visit bearingarms.com for the full rundown, including a half dozen more photos there and a link to a really awesome(ly sad) photo gallery with another five dozen (!).

Virginia State Police report that Black Friday gun sales broke VA’s previous record, with records showing 3,902 gun transactions, beating last year’s number of 3856. They’re well on pace to beat their all-time total monthly record, set last year, needing only another 800 or so sales on top of the 431,693 they already have to surpass last year’s number of 432,387. And since that current number is from Monday, they may have already done it by the time you’re reading this. That’s change I can believe in.

Gander Mountain announced last week that the southeast will be getting three new stores, in Gadsden, Alabama; McDonough, GA; and Pensacola, Florida. All three stores are set to open in the spring of 2014.

Are you into M1 Garands? Are you really into M1 Garands? If so, here’s something to add to your future plans list for 2015. I say 2015 because the 2014 classes are all sold out already. The Civilian Marksmanship Program is holding six “CMP-AMC” or Advanced Maintenance Classes in 2014 for “students with strong mechanical aptitude and a desire to learn how to work on their M1 Garand rifle.” AMC classes are limited to 20 students and will be held at the CMP’s Custom Shop in Anniston. Tools are provided for use in the class, and this is not a class for experienced gunsmiths or those with advanced knowledge. No prior armorer or shooting experience necessary. There is a $1,400 fee for the three-day class and includes the CMP Special Rifle that participants will build in the class. The 2014 classes opened for registration on November 25th, and all six classes and their waitlists were filled within 30 minutes. So mark your calendars, set a reminder, and bookmark this page.

A longer video from Richard Ryan, but another great one. No longer content with simply blowing stuff up, he sets up a drag race between a .50BMG bullet and a length of det cord, by using the bullet to set off the blasting cap, to see which one gets to destroy a new XBox One. Who is the winner? We are, because the video is pretty awesome. Make sure you watch in hi-def.