So I bought a GLOCK 19 for everyday carry. Nice gun. Not too big. Plenty of capacity. Shoots well. Reliable as death and taxes; fully capable of causing one and, at least initially (for the Great State of Texas), the other. I looked at SIG, Springfield, Smith, H&K and FN. But I bought the GLOCK because I’m a striker-fired carry gun kinda guy and I needed a gun (after retiring my Caracal C). A GLOCK is a gun. But I’m annoyed that the Austrian firearm is just a little too generic. Specifically, the packaging puts me off . . . Have you seen government-mandated cigarette packaging in Australia? If you’re squeamish, don’t click here. (And those are just the pretty ones.) The law was predicated on the fact that cigarettes are bad, consumers are children—literally and figuratively—the cigarette industry is the government’s bitch and uglifying the packs will put people off buying them.

Guns save lives. So why does GLOCK destroy the aesthetics of their packaging with a WARNING! DANGER, WILL ROBINSON! label larger than a pack of playing cards—when they don’t have to? They do it for the children!

Children are attracted to and can operate firearms that cause severe injuries or death. Prevent child access by always keeping guns locked away and unloaded when not in use. If you keep a loaded firearm where a child obtains and improperly uses it, you may be fined or sent to prison.

No, the feds didn’t write that copy. GLOCK’s lawyers (presumably) did. It’s repeated in Spanish too (once again proving that English is the more concise of the two languages). And if that’s not enough, there’s the ALL CAPS finer print below:

The use of a locking device or safety lock is only one aspect of responsible firearms storage. For increased safety firearms should be stored unloaded and locked in a location that is both separate from their ammunition and inaccessible to children and other unauthorized person.

Do not place a loaded pistol in this container. An unattended loaded weapon can cause injury or death to yourself or another!

Yup. All by itself. Boom. You’re dead! Exclamation mark and all. Talk about playing into the hands of the antis . . . But I’d rather talk about aesthetics.

The warning label is hideous. It covers the GL of the GLOCK logo underneath, making me wonder if the Austrian gunmaker was hiding an F-bomb. (JK. Austrians don’t do irony.) The label’s not even centered. Off to the right: the ID/UPC sticker attached by Sportsman’s Paradise, accompanied by a green stock number dot peeling off the side. Ug.

Let’s have a look at the case without the stickers. FWIW, this paragraph was preceded by a great deal of [mostly unsuccessful] effort attempting to remove leftover adhesive from the aforementioned warning label. And here’s what we’ve got: OCK! (Shades of The World According to Garp.) To be fair, LOCK. The barely perceptible G goes all the way around the case and forms the L (or vice versa). Which just goes to show you how lame GLOCK’s logo is, generally speaking. 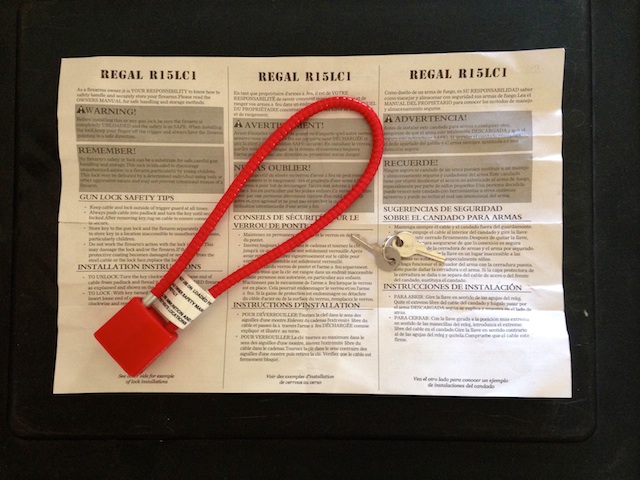 Here’s the kicker: there’s no way to easily and securely lock the GLOCK case. Unlike Springfield’s svelte XD attaché case or any of Smith & Wesson’s cases, there’s no purpose-built hole through which you can thread a beefy lock. You’re left with the bendy crappy kind of lock: a REGAL R15LCI, complete with an entire warning pamphlet in three languages (pourquoi pas?) that provides installation instructions (on the reverse side). For guns. Not gun cases. But there is a warning sticker! How easy is it to defeat the REGAL R15LCI? Not as easy as it is to lose the keys but almost. I mean, is there a pair of bolt cutters—make that garden shears—that won’t cut through the lock?

If you want to use the lock to secure the GLOCK case containing your unloaded firearm—for transportation or storage—you can only wrap the cable fully around the carrying handle once. When so secured, you can still easily remove the firearm from the case, with the lock attached [as above].

GLOCK could counter that they don’t want their customers to use their case for storage or, even more conveniently, transportation—despite human nature, customer convenience and branding opportunities. But why wouldn’t [supposedly] safety obsessed GLOCK want their customers’ gun to be doubly secured? Once in a locked GLOCK case and also in a “proper locked container”? Wouldn’t that be better than a sticker? OK, I’m done. Except to say this: I love my GLOCK. I love what GLOCK does for gun rights; donating millions to the NRA and others. But they need to step up their packaging game. If Springfield can make a case that’s worth owning in and of itself at this price point, a case where everything has its place rather than simply tossed in (which creates its own dangers) so can GLOCK.

Make me proud(er) to own your piece guys. And genuinely safer for having done so.