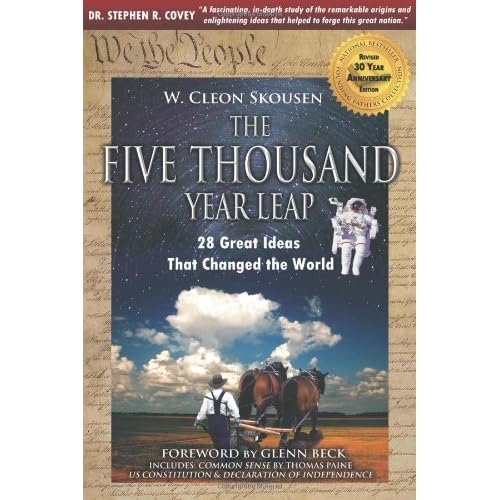 Gun rights. I can’t think of anything more important to TTAG readers, given our collective interests in things like self-defense, shooting sports, and collecting firearms. And when we read stories of how people in our government – people like our President and Supreme Court Justices – can make idiotic statements indicating that they feel our rights should be taken away with the stroke of a pen, it makes me think what we need is to gird ourselves with the power of knowledge. So where should we start?

I think it’s always a wise move to start at the very beginning. (A very good place to start.) Where’s the beginning, in this case? I’d recommend that you read a book, in this case a very good book, The Five Thousand Year Leap, by W. Cleon Skousen.

Subtitled 28 Great Ideas that Changed the World, the book is actually a chronicle of how our founding fathers came to create the U.S. Constitution from sources of inspiration as diverse as the Magna Carta and the Holy Bible. It goes into great detail regarding how groundbreaking these ideas were, and what an amazing leap forward the Constitution was, when compared to every other form of government.

To put this in perspective, if you’re a film buff, you know that much of the visual language of film we enjoy today came from a handful of innovative directors, say for instance, Orson Welles. If you understand the significance of Citizen Kane in film history, you get that it influenced virtually every film that came after it, and that many things we take for granted in films today simply didn’t exist B.C.K. (Before Citizen Kane). The U.S. Constitution is just such a document. In retrospect, it looks obvious. When it was written, it was anything but obvious.

So what does this mean to us as members of the TTAGencia? Knowledge is power. For instance, when Justice Stephen Breyer says asinine things like “the founding fathers never meant for guns to be unregulated,” we cannot answer him with authority without actually knowing what the founding fathers said, wrote, and meant. What I learned from The Five Thousand Year Leap is that our Constitution is a finely-tuned machine that can be destroyed with the wrong kind of tinkering.

For instance, few people today realize that there was a reason the founders set up Congress so that Representatives were elected by We the People, where U.S. Senators were originally appointed by each State legislature. The reason was to provide a separation of powers between the interests of the the people and the interests of the individual states. That seems irrelevant to many, but what it did was to give each state a voice in how the Federal government is run. States Rights are much easier to protect when the States have a voice in running the Federal government.

Why does this matter? Look at esoteric Federal ruling for things like the vaunted “Commerce Clause” and you’ll quickly realize that without a voice in the Federal government, it’s not possible for for the States to stop Federal overreach.

Of course, being the analytical, cynical and somewhat suspicious individual that I am, I always want to know where the info I have comes from, and to understand the personal bias – if any – that the author introduces into the subject matter. So I did some checking on the author.

Turns out W. Cleon Skousen has a interesting history. He was an FBI agent who left the Feds and became a local police chief. Later in life, he became a professor and Constitutional scholar. He was also a prominent member of the John Birch Society, a group known as an ultra-right wing political organization. None of this information changed my view of anything he wrote in the book. But knowing where he comes from helps me put his work into perspective.

I actually got to meet the late Dr. Skousen’s kids at a Tax Day rally in San Antonio. I bought the book from them on the spot. The book had been a labor of love for their dad, but hadn’t generated much attention until Glenn Beck read it and publicized it on his show.

It’s since become a best-seller, and with good reason. I’ve not read another book that so clearly spells out not only what the Constitution means and how it came to be, but one that details how important religion actually was to the founders, and how profoundly it influenced their work. It puts the argument about the modern concept of “separation of church and state” into stark contrast versus what the founders clearly saw as a need to allow government to be derived from moral law, without the need or desire for government to be the tool of a national religion.

Those that parrot the argument about removing all trace of religious values from government would do well to read how the founders wanted no one faith to be placed ahead of others, but fervently believed that religious values were foundation for our legal system.

It’s all well and good for those of us to believe in gun rights to feel that we have the law on our side. It’s quite another to be able argue facts, when our beliefs are put to the test. I’m a big believer in reading. (It’s one of the reasons I became a writer). During this holiday season, I encourage and challenge each of you to expand your knowledge on subjects that have a bearing on your 2nd Amendment rights. A great place to start is at the beginning, and The Five Thousand Year Leap is a very good place to start.