On 10 May, 1953, a front was passing through Slave Lake, a village on the South shore of Lesser Slave Lake in  Alberta, Canada. It was cool, cloudy, and windy. A 63-year-old Cree grandmother and her partner were hunting small game near Florida Lake.

The wind was from the NE, at 12 to 24 mph. At dawn, temperature had been 40 degrees F. On the morning of the 11th it would be 35 degrees F. The high for the 10th was 58 degrees. Bella Twin and her partner Dave Auger were going to make hunting history.

They were about seven miles South of Slave Lake. Several accounts have been offered for what happened. The most plausible: they were hunting small game along a cutline for oil exploration. They were not picking berries. There are no berries available on 10 May in the vicinity of Slave Lake. It was too early.

They saw a large grizzly walking the cutline toward them. They moved to the side of the cutline and hid, hoping the bear would not discover them.

Bella Twin had her beat up .22 single shot Cooey Ace 1 with her. She had used it for many years on her trap line. She was known to be a deadly shot with the small rifle. Dave Auger appears to have been unarmed.

The bear kept getting closer and closer. It came within a few yards of them. This is entirely believable on a day with strong winds. Winds make a lot of noise in the woods, and they can blow your scent away from game. Wooded terrain, especially on the edge of a cut, is complex, and wind eddies are unpredictable.

As the huge grizzly came even with their position, it might have caught a whiff of their scent. Animals will often stop and sniff to try to identify a scent. That may have happened here.

Bella Twin thought it was less risk to shoot rather than not shoot. The bear was very close, only a few yards away. All accounts agree on that. I suspect that she was tracking the bear in her sights.

There was a lot of movement from branches with the wind, so that slight movement would not be very noticeable. She was probably behind a brush pile from the cut, or a tree. Experienced hunters will take advantage of concealment if it is available.

Bella knew animal anatomy very well. She had been a trapper and a hunter for decades. She aimed at the weakest point in the side of the skull and fired her Cooey, loaded with a single round of .22 Long. The bear dropped like a rock.

Bella made sure. She walked up to the bear and fired another six or seven rounds of .22 long into its brain, in the same spot. It was all the ammunition she had on her. She “paid the insurance.” Don’t assume a large animal is dead. Make sure. My father taught me that when I was 13. You can see from the picture that the bullets entered the skull at very close to a right angle. That makes it unlikely the bear was standing on its hind legs when it was shot.

Bella Twin’s grandson became an award winning author. He described Bella as a “tiny woman”, and he was not a large man. She was probably  under five feet tall. If the bear had stood up near her, its head would have been nine feet in the air. I believe the bear was on all fours when it was shot. One of the bullets made its way completely through the skull and exited the other side. You can see the exit hole on the right side. 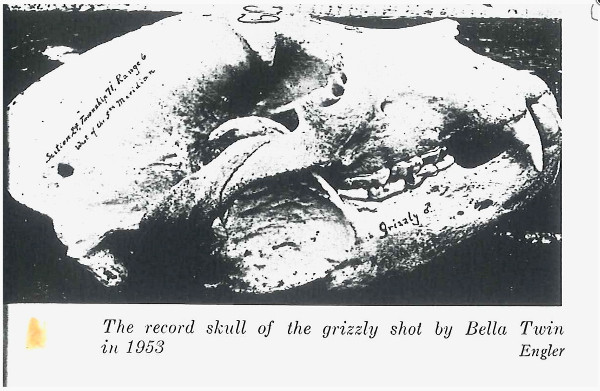 The huge grizzly was a world record in 1953. Bella sold the hide and her rifle to a museum. Another collector purchased the bear skull and had it sent in for measurement, which is how it made the record books.

In the top picture by Engler, the rifle is missing the bolt. The hide has been tanned. We do not know what year the picture was taken. You can see the measurements written on the skull. This closeup shows the penciled score. Bella Twin’s bear lost the top spot the next year, in 1954, to F. Nygaard, a commercial salmon fisherman, who shot his bear on the coast of British Columbia.  That bear scored 26 10/16, 3/16 higher. The current rank in the Boone and Crockett records is number 21, along with other bears measured at 26 7/16:

People have estimated the bear weighed 1,000 pounds. I haven’t found any record of weight measurement or a measure of the hide. Engler’s photo, above, cuts off the bottom and sides of the hide, but we can estimate what the bear hide measurement would be.

How to square a hide.

An educated guess is a square size between 9 and 10 feet, considering shrinkage of tanned hides, and estimating the position of the tail from the picture. The Cooey Ace 1 is 33 inches long. It was used to scale the estimate.

The Bear was reported to be shot with a .22 Long. The holes in the Skull verify that it was a .22.

I recall buying longs in the middle 1960’s from a gas station. Longs cost less than Long Rifle cartridges.  My standard measure of value was “how many .22 cartridges does this cost?” Processing an enormous bear is a lot of work, even for experienced hunters and trappers. Perhaps Bella Twin and/or Dave Auger went for help. It was good that the weather was cool. It explains the condition of the hide. We don’t know what time of day the bear was shot. The day was close to 16 hours long at Slave Lake on 10 May, 1953.

Bella Twin was a strong and competent woman, despite her tiny size. Her grandson wrote lovingly about her and her Cree ways. She was born in 1890. She and her grizzly will be talked about around campfires for many years to come.