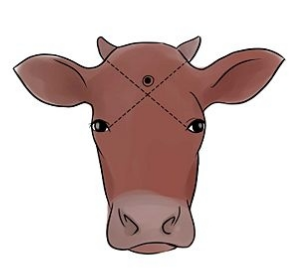 “A cow escaped from a slaughterhouse and headed for the grounds of Munich’s Oktoberfest,” nbcnews.com reports, “triggering a high-speed police pursuit. The bovine, which fled after a worker mistakenly left a gate open, ran through the southern German city. A 28-year old woman who was out jogging was injured by the cow. ‘The animal stabbed its horns into the woman’s back, who had to be brought to a hospital with massive injuries,’ police spokesman Carsten Neubert told NBC News.” Bovine attacks are not uncommon. Cows kill about 22 Americans a year. survival.about.com offers this advice . . .

If you detect an aggressive cow or a threatening group of cows, keep moving calmly and do not make direct eye contact. Keep your body facing the cow; do not turn your back to the animal or run.

As this is a gun blog, an obvious question arises: would your self-defense firearm be sufficient to take out a cow? Answer: shot placement! Plenty of people slaughter cows uses a .22-caliber firearm to send meat-on-the-hoof to the Great Pasture in the Sky. But then, those cows never saw it coming.

As a public service, for your personal protection, here’s wikihow.com‘s advice on the subject [illustration at the top of this post].

Aim carefully for the invisible X above the eyes, and then squeeze the trigger. If your shot is right on the mark, then the animal will die instantly or be rendered insensible.

In order to know where to place the bullet from your gun to render the animal insensible, an invisible X should be visualized: Start at the top of the base of the animal’s horn or ear, then trace it to the center of the opposite eye. Do the same with the other ear or eye. (Or think of it this way: left ear/horn to right eye, right ear/horn to left eye.) The center were the lines meet is where the bullet should be placed.

If the gun is placed in between the eyes, the shot will completely miss the brain and quite possibly fail to kill. Thus it is very important to know where to place the gun in order to let the animal meet a swift and painless end.

It seems the Germans have that information:

The 1,200-pound animal ran toward the Oktoberfest field where workers were setting up tents for the beer festival, which is due to begin in two weeks. “The cow then tried to attack another person and was luckily blocked by a police vehicle, which eventually got damaged by the impact,” Neubert said. Because the cow could not be subdued, officers eventually had to kill it with two shots from a rifle. Officials at the slaughterhouse confirmed that the meat would be disposed of and would not end up on Oktoberfest’s grills.

Germans don’t eat what they kill? Or is this an example of political correctness run amok in the Federal Republic? If so, the best course of action to avoid future bloodshed: ban cows!