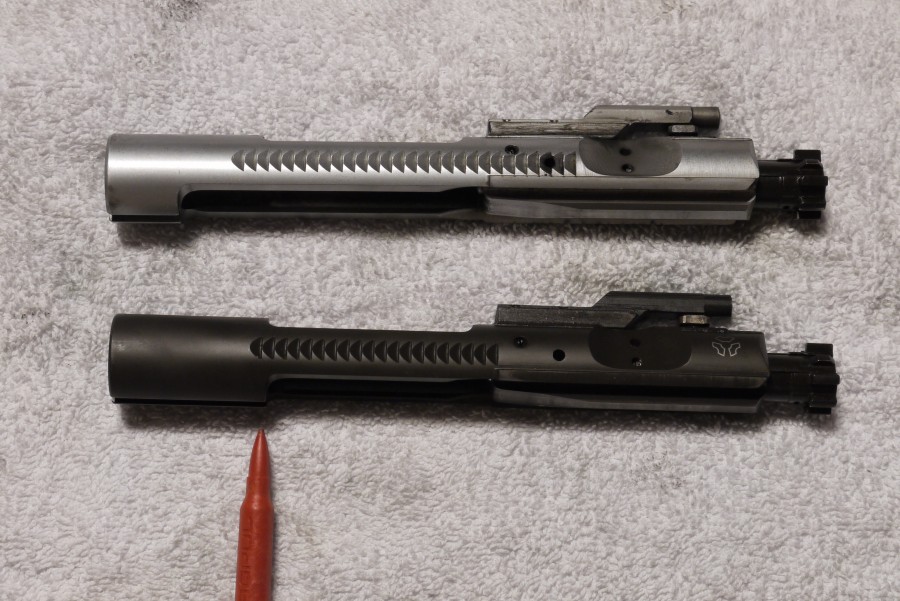 OK so no one actually sent in an email for this one, but its a question I get asked all the time. And since I have nothing to do while I wait here for some video equipment to be dropped off in preparation for that bail out bag challenge segment I figured I would sit down and explain it quickly.

Semi-auto fire is easy, from a technical standpoint at least. Pull the trigger, the gun goes bang, everything resets, and the shooter pulls the trigger again for the next round. Even some forms of full auto fire is easy, such as the open bolt Thompson SMG or Browning BAR. But the trick is being able to have a select fire gun that fires from a closed bolt, giving the shooter increased accuracy (thanks to the closed bolt) and the option to go either semi or full auto (the select fire). Its also cleaner and less likely to jam, but that’s just an added bonus.

The issue with closed-bolt firearms such as the AR-15 is that there’s a locking mechanism on the bolt. When the bolt goes forward it rotates, locking the breech and sealing the chamber. This allows for increased pressure in the chamber and therefore higher velocity rounds as the bolt is closed longer and allows more powder to be burned safely. There are other options, such as the roller delayed blowback system in the StG-45 and MP5, but the rotating bolt system has been in use in combat rifles for the United States since the M1 Garand and it works pretty darn well.

This is an issue because it means the gun cannot fire until the bolt is fully locked in place, otherwise there could be some nasty consequences. So Stoner engineered a foolproof method of determining when the bolt was fully locked and the gun could fire again. Enter the full-auto lug.

If you notice, the profile of the AR-15 bolt carrier isn’t completely cylindrical. There’s a cutout on the bottom, and a large chunk where there is no material on the top or bottom. That’s by design, both cutting down on the weight of the bolt carrier and allowing the hammer to properly impact the rear of the firing pin when locked in place. But the lug on the bottom of the bolt plays an important role in full auto fire. When the bolt is finally locked firmly in place that lug will contact the sear release in the full auto mechanism and automatically fire the gun. It’s a pretty nifty solution to an interesting problem.

Semi-auto bolt carriers came into being because gun companies and legislators didn’t want the Average Joe to have anything remotely possibly able to be used to make something full auto, so they trimmed the lug off the bottom of the bolt carrier. A semi-auto only bolt carrier will not properly trip the sear release, rendering the firearm only capable of semi-auto fire.

The astute reader will notice that the average civilian AR-15 does not have this mythical “sear release” in the trigger group. For that reason, a full auto bolt carrier in a standard civilian AR-15 will not make the gun go full auto. You need some more parts, and generally the only people who have those parts don’t sell them to any Joe who asks.

So what’s the bottom line? For us lowly civilians, there’s no difference in function between a semi-auto and a full-auto bolt carrier. Either will make your gun go bang, and neither will let it go full auto unless you have the other required parts. It does however add some weight to your bolt carrier and strengthen it slightly, which is the reason that I like to go with FA bolt carriers. That, and my aspirations to one day be among the chosen few with a registered lower. Check your local laws though, as some states may restrict such things.

And if they do, move to Texas.