I’ve managed to get quite a bit of ammo testing done in the last few months. I have reviewed several products from Buffalo Bore and each has been strikingly different in terms of materials, purpose, and chambering. Today we are taking a look at a round with both bark and bite, but not much kick, the Buffalo-Barnes 9mm 95gr +P+ .

General Background
Not too long ago, big-bore ammo maker Buffalo Bore began using lead-free Barnes bullets in their products. These bullets are known for their tough construction and ability to expand under harsh conditions. There are lots of loads in the Buffalo-Barnes line including .44 Mag, .357 Mag, .45-70 among others.

The load featured here consists of a lead-free Barnes expanding bullet and a brass case. The bullet’s point is deep and hollow-looking compared to traditional ammo.

Buffalo Bore Buffalo-Barnes TAC-XP 95gr +P+ Lead Free/Low Flash is available in a 20 round box for about $36.

Accuracy and Performance
I tested this load in a Ruger SR1911 9mm Officer pistol. I have reviewed this gun previously on TTAG and it was a solid performer. I knew what kind of accuracy this gun was capable of and it didn’t disappoint with this ammo. Average accuracy of three five-shot groups at 15 yards was 2”. Recoil was low and easy to control. I fired the bullets at both paper targets and against steel plates.

To my surprise, the bullets proved to be remarkably tough. The following photo is a bullet that left the muzzle at 1501fps (average of five shots over my Oehler 35P chronograph) and hit steel fifteen feet away. The bullet stayed together and looks incredible. This is a testament to how durable some modern projectiles are. Ballistic Performance
I received a 10% FBI gel block from Clear Ballistics for this section of my testing. The rounds were fired into the gel at a self-defense distance of twenty feet.

In the course of my testing, the load amazingly did not have any overpenetration. This surprised me at first considering their speed, but it was a welcome cherry on top for this already great round. 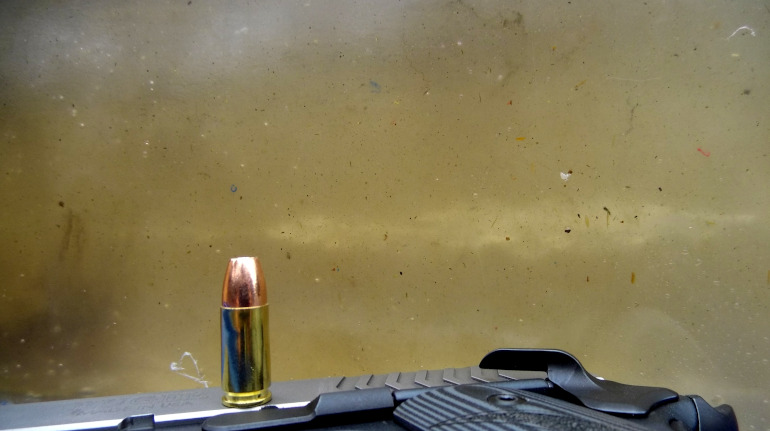 Average penetration in bare gel was exactly 15”. You can clearly see two bullets right next to each other in the photo below. The picture was taken from the back of the block and the bullets were about 1″ away from end. That is great performance and it’s hard to get that from many small guns or short barrels. The bullets easily passed through denim, leather, and normal fabric and expanded reliably. I noticed no significant deviation in terms of expansion, clogging, or damage to the projectiles.

The best part of this load is that over-penetration wasn’t an issue. This has been a serious concern of mine with other personal defense ammo I’ve tested, including some from Buffalo Bore, but this one starts fast from the muzzle and stops fast in tissue. I wouldn’t hesitate to carry this in a compact 9mm. 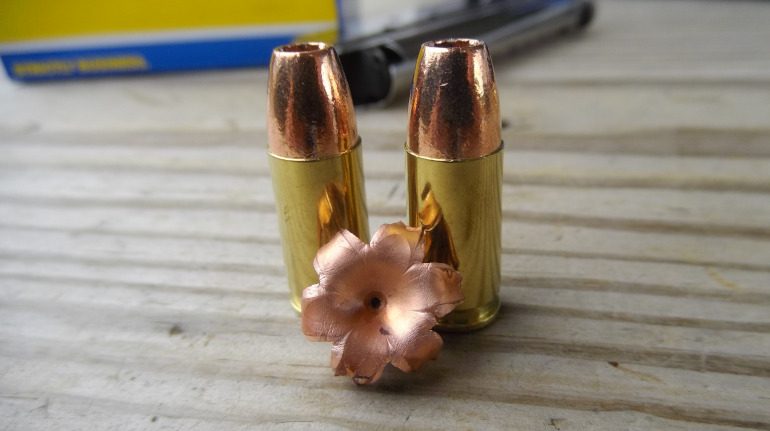 Overall Impressions
Buffalo Bore’s execution of this load is nothing short of stellar. The +P+ rating will scare some people away, but it sounds like more of a wrist-wrencher than it really is. Recoil was low, very similar to a regular 115gr standard ball target loads, but the bark was much, much louder and the target reacted in a manner that reflected that speed and expansion. The round is excellent for carry and cuts no corners in any department.

Handling: * * * * *
Recoil was negligible considering the extreme velocity. Follow-ups were easy and fast.

Terminal Performance: * * * * *
The bullets showed remarkable durability, especially going through materials. The penetration was just right for a self-defense load and the wound channels were excellent.

Overall: * * * * *
Powerful, tough, and reliable, but easy on the hands, even in a compact gun. You can absolutely carry this round with confidence.