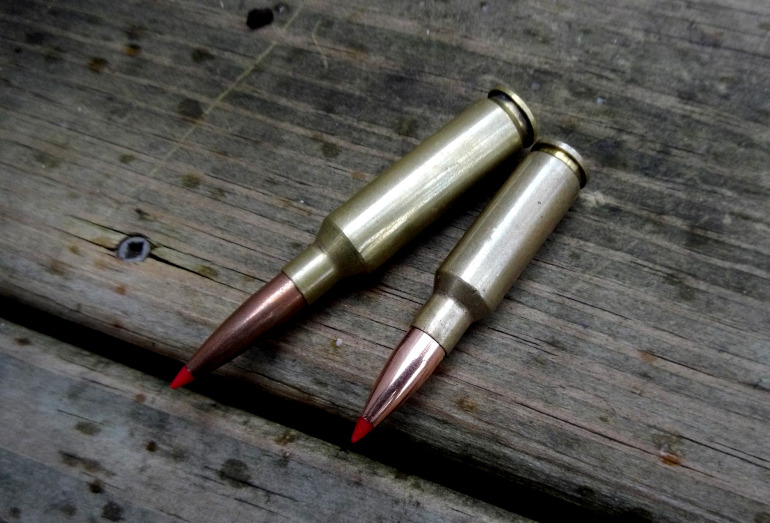 The 6.5mm bore has enjoyed a steady increase in popularity in the United States in the last few years. Despite what some say, there is nothing new or revolutionary about it. There is no voodoo or magic that exists in modern 6.5mm cartridges that wasn’t first perfected in the World War era.

What we have today with the 6.5mm is a reawakening, a rebirth of knowledge that was forgotten or disregarded along the path of arms development. There are two 6.5mm cartridges at the top of the heap today and we will be looking at the good and bad of what each has to offer: the 6.5 Creedmoor and the 6.5 Grendel.

The first widely adopted 6.5mm cartridge still in popular use was the 6.5x55mm. This round was designed for the Swedish M96 Mauser and Scandinavian Krag service rifles. The round, introduced the mid 1890’s, served in both World Wars and became one of the most successful European hunting and sporting cartridges ever.

The chambering is currently offered by virtually all European arms makers and is arguably the most popular centerfire sporting rifle cartridge on that continent. The 6.5x55mm is relevant to the American 6.5mm discussion because the 6.5 Creedmoor is essentially identical to the 6.5x55mm in all ways aside from case dimensions. Both typically fire a 140gr bullet at about 2700fps.

The major reason that the 6.5 Creedmoor became successful was that it was an immediate ‘upgrade’ to a .308 Winchester base rifle. I use the term ‘upgrade’ in an oversimplified way, as the 6.5 CM and .308 Win are very different and each has pros and cons depending on the end use.

The 6.5x55mm never gained good traction in America because it has, to us, a non-standard case head diameter and a non-standard cartridge length. This means that the little round has to be chambered in larger and heavier long-action rifles instead of the more compact short-action common to the .308 Win.

The popularity of the 6.5 CM comes from the fact that it readily fits into anything originally made for .308. This meant that there was very little development time when it came to making rifles. The explosion of popularity was aided substantially by a myriad of host systems. The 6.5 CM shares the same case head and overall length with .308, making it just a barrel swap to alter chamberings.

Just like the old Swedish round it copies, the 6.5 Creedmoor enjoys long-for-caliber, very aerodynamic bullets and low recoil. The recoil alone is a consideration for weak or young shooters as well as people who like to play games like PRS. Gun Gamers today like the 6.5 Creedmoor because it is an accurate cartridge that is great for shooting steel plates at long range. Cost of entry is comparatively low for these game guns, as match ammo for 6.5 Creedmoor is fairly affordable and acceptable rifles are readily available. The 6.5 Creedmoor is one of the best and most accessible target shooting cartridges introduced in recent years, but it’s not all roses. Editorial: It should be noted that, despite what you read online and in magazines, the 6.5 Creedmoor isn’t considered an ethical long range hunting cartridge by many hunters. I completely disagree with any type of hunting that adds variables to the shot, as adding uncertainty is tantamount to adding cruelty.

There is nothing victorious or glamorous about wounding an animal and having it die suffering of infection or worse. It is the duty of the sportsman to be responsible to the animal, and in my opinion, long-range hunting is irresponsible. Think of it this way: one small puff of wind is enough to make a heart shot into a gut shot at 800+ yards.

The 6.5 CM is similar in power to a .243 or .257 Roberts and, regardless of what marketing companies push you to believe, this is a 200-300 yard cartridge for deer-sized game. It isn’t a great choice for anything bigger unless you move to a larger and heavier bullet, which begs the question why you wouldn’t just get an acceptable larger chambering to begin with. End of soap box speech. Unlike the 6.5 Creedmoor, which began life as a paper-punching round, the 6.5 Grendel started out as a project to improve upon the performance of the AR-15 over 5.56mm NATO. The cartridge fits into a standard-sized AR-15, where the 6.5 Creedmoor needs a larger AR-10-type rifle. The round was designed to use 90-130gr bullets and match or better the 5.56mm NATO inside 800 yards. Using a heavier bullet, it is comparable in retained energy to a 147gr 7.62mm NATO (.308 Win) at those same ranges, but is handily outclassed when heavier .30 caliber bullets are used.

The Grendel is a round that has struggled to gain widespread acceptance for a variety of reasons. Unlike the 6.5 Creedmoor, which is only a barrel change, the 6.5 Grendel needs a new barrel, magazines, and bolt to adapt a 5.56mm AR rifle to it.

Up until 2011, the 6.5 Grendel wasn’t a standardized SAAMI-accepted cartridge and its name and commercial production were restricted by copyright. Most people are hesitant to invest in cartridges that are so strictly guarded, and as a result, it didn’t quite catch on like wildfire.

Compared directly to the 6.5 Creedmoor, the 6.5 Grendel is a bit of an odd duck. While the Creedmoor makes good use of long-favored 140gr bullets, the Grendel struggles with them and instead does well with lighter bullets, thus making it less effective at every distance that the 6.5mm bore has an advantage at. While it does very well in terms of ballistics when compared directly to 5.56mm NATO, it suffers in terms of increased ammunition weight and reduced magazine capacity.

Another strike against the 6.5 Grendel is that it does best from long barrels that allow it to launch bullets faster. While it does okay from a 14.5-16” barrel, it really needs something in the 20” range to reach peak performance, thus negating much of the advantages of the compact AR-15 platform.

This is a consideration when looking at rifle weight. A lightweight 6.5 Creedmoor AR-10 isn’t that much heavier than an AR-15 in 6.5 Grendel and it does just about everything better at all ranges.

An area where 6.5 Grendel really shines is in compact bolt actions. The little cartridge is excellent inside 200 yards on small to medium sized deer or other small game. There are many companies that make compact bolt actions for this purpose and they are quite light and accurate. These rifles are very good for new or young hunters due to their low recoil.

Overall, the 6.5 Creedmoor and 6.5 Grendel are very, very different cartridges that share only one thing: bore size. There’s not much else that they have in common. They vary greatly in ballistic performance, bullet weight range, effective distance, platform weight and cost, and theory of use.

One was designed for target shooting as a stand-alone, and does well at it. The other was designed to boost the performance of an existing weapon platform, but only does so marginally. I’m not the biggest fan of 6.5 Creedmoor, but I have to say that it offers the most benefits of any cartridge in the modern 6.5 family to the average American shooter.

Do you have your own thoughts on this? State your case for the 6.5 Creedmoor or 6.5 Grendel and let me know what you think.