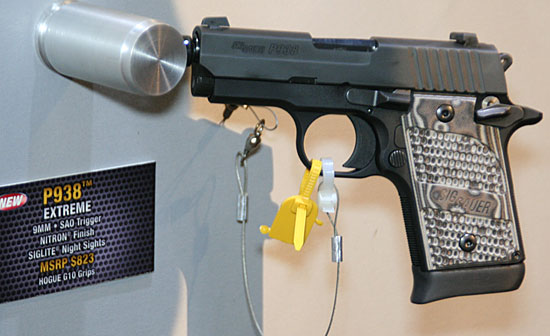 For 12 long years*, Alameda County which includes Oakland and Berkeley, has had an outright ban on firearms on county property. Russell and Sallie Nordyke, promoters of TS Gun Shows had operated gun shows on the Pleasanton fairgrounds until 1999 when the county enacted the gun show ban. That’s when the Nordykes challenged the ban on Second Amendment grounds. What’s finally changed after 12 years to resolve the issue? It’s wasn’t the court’s ruling, but a reversal on the part of Alameda County . . .

Specifically, county lawyers agreed that the Nordykes could hold their gun shows if, for example, weapons were tethered to tables by “a sturdy cable,” allowing buyers to “physically inspect properly secured firearms.”

As for the county’s restrictions, the 9th Circuit found that, “as applied to the plaintiffs’ gun shows, and as interpreted by the county, this regulation is permissible.”

The County’s “interpretation” of the regulation is, at best, highly suspect, given that the actual wording of the regulation is a blanket ban on firearms on county property with a list of exceptions that does not include – by any stretch of the imagination – gun shows or weapons tethered to tables. Call me skeptical, but I’ll believe a gun show will actually be held at the fairgrounds when I see it.

The 9th Circuit case was expected to be a key legal test of the scope of recent U.S. Supreme Court rulings establishing that the Second Amendment applies to state and local gun regulations. In the end, not so much. The court dodged that aspect of the case.

“Should the county add new requirements or enforce the ordinance unequally, or should additional facts come to light, (the Nordykes) or others similarly situated may, of course, bring a new Second Amendment challenge,” the court wrote. “But in the present case, they cannot succeed.”

While this is a clear victory for the Nordykes and other gun show promoters and participants, I’m disappointed that the 2nd Amendment issue wasn’t settled. However, I’m sure the issue will arise in California again before too long.

*Those 12 years saw this case batted between Superior and Appellate Courts like a ball in doubles tennis. Part of the reason for that was that the rulings in Heller and McDonald were issued and had to be considered in this case.